Zion Luxury at a Bargain Price 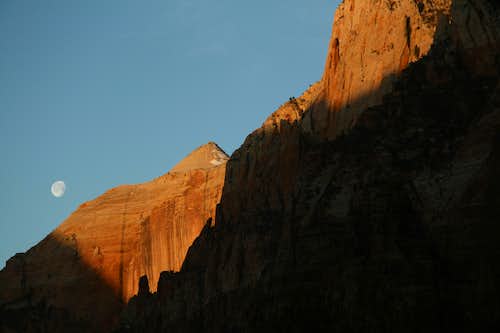 A beautiful morning for a climb... 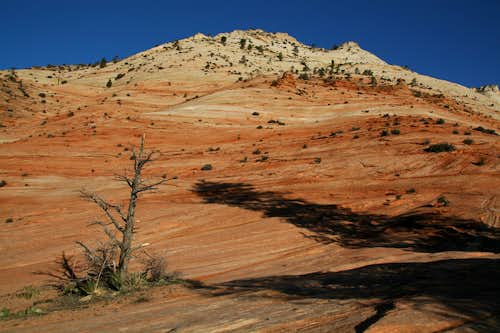 Sandstone patterns
After a failed attempt to solo Tabernacle Dome and a climb of Checkerboard Mesa that was more bushwhacking than climbing and led to a summit disappointingly covered by trees, I was hungry for a good scramble off the beaten path that would give me the kind of wide-open views that make so many mountaintops a revelation.

Zion Canyon gets most of the attention and the rave reviews, and pictures of it dominate the postcard stands. But in the canyon, there is just a handful of hiking trails, and not one of them is the type you take to find solitude unless you go at a time of year or day when few other people are out or during weather conditions that keep most other people away. As far as off-trail scrambles to summits go, there's not much that looks promising, though. In Zion Canyon, a guy like me has to suck it up and admit that the cliffs there are the purview of technical rock climbers, not scramblers and peakbaggers.

Fortunately, there is the east side of Zion. The east side is full of summits, most of them unnamed or only unofficially named. Of course, since this is Zion, many of these peaks are strictly technical or have technical options, but there are also several that range from Class 2 slickrock walks to Class 4 scrambles.

Enter South Ariel Peak, which is mostly a hike but requires some hands work (Class 3 or 4 depending on exactly where) on the upper slopes and some easy Class 3 (in snow-free conditions) to attain the summit block itself.

I'd spotted South Ariel the previous morning while driving out to Checkerboard Mesa from Zion Canyon. I was looking for alternate objectives in case I found Checkerboard unclimbable for me. South Ariel (whose name I didn't know until after I'd returned home and found its page here on SP), was one of a few that stood out. It is two miles west of the signed Checkerboard Mesa viewpoint that sits just inside the park's eastern entrance. A pullout on the south side of the road (South Ariel is on the north side) provides parking room for a few cars.

There's nothing special to report about the climb. The climb was short and sweet, gaining about 700' in 0.4 mi, a very strenous grade although I'd rate the outing as just moderate due to the brevity of the route. It was steeper than it looked from below, which seems to occur quite a bit in Zion, but there were sweeping, unobstructed views every step of the way, and they more than made up for the sweat. I learned that downclimbing sandstone slopes is a lot trickier than upclimbing them, but that's usually the case no matter what the surface conditions are. 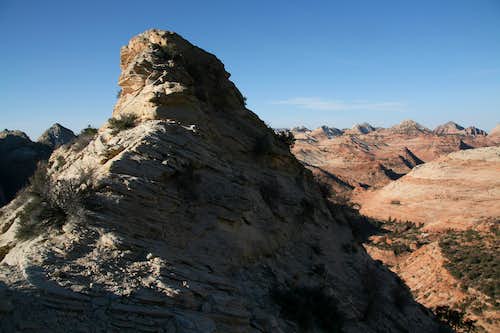 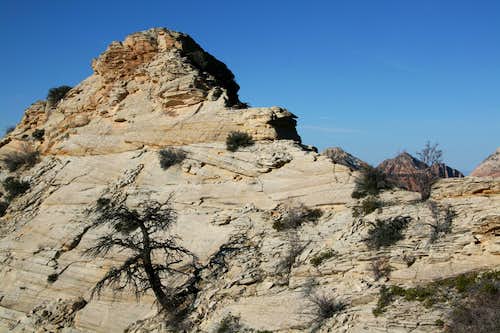 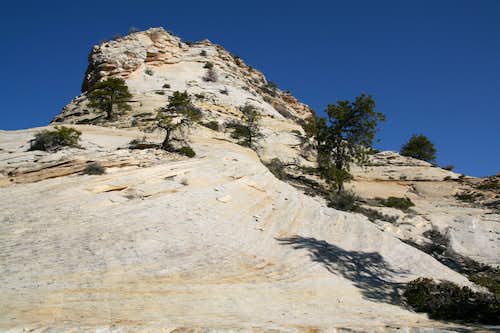 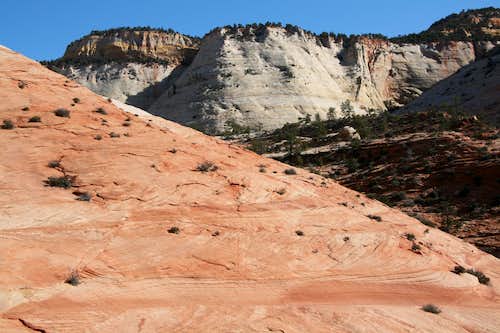 Sandstone slopes
At the summit, I watched the cars crawling along the road far below me, took in the great scenery in all directions, and wrote on some postcards to send to my kids. To descend, I ended up, after flirting with some other ways, retracing my route back to the northern ridgeline. Instead of then taking the same route back to the car, though, I contoured around to the southern ridgeline and used that and the southeastern face to complete a pleasant tour de South Ariel.

What I got out of this short outing was, in addition to the fine views, a little satisfaction following two somewhat disappointing climbs elsewhere in the area. South Ariel is a nice little peak, the likes of which I'd frequently dash up after work if I lived in the area. It's less than half a mile from the road, but it gets little traffic since there are no trails and the peak isn't named on most maps. It's more than just a hike but less than a technical climb, perfect for those who love to scramble, and you don't need any beta beforehand; you just see it and go. It's rare that such solitude, scenery, and fun are available for such little effort, and that is the magic of South Ariel Peak and much of the rest of Zion's eastern side. 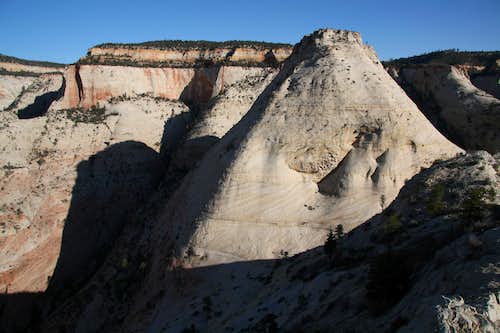 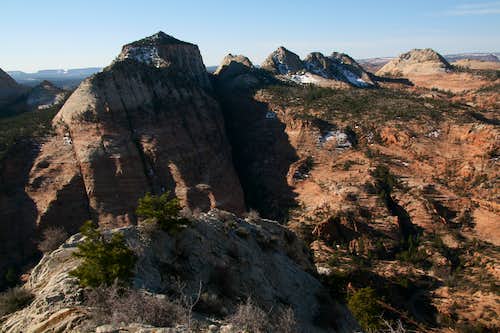 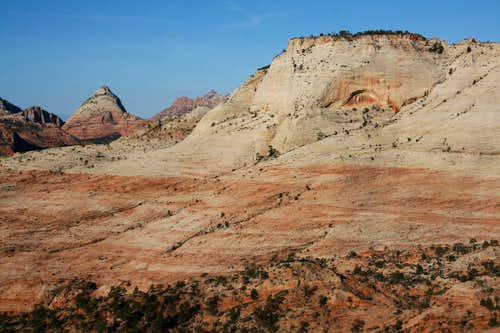 ...you mentioning South Ariel Peak many years ago, in my post for Angels Landing. It would be really nice to back to Zion (understatement)! Hope your winter has been kinder than here in the midwest! Mark

Mark, our winter hasn't been as harsh as yours has been, but it's been colder and snowier than usual, and I'm looking forward to my Southwest trip next month.