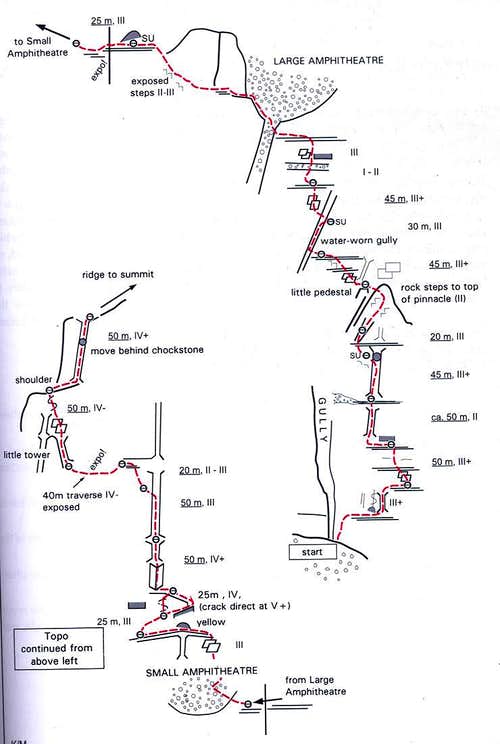 The South Face of Tofana di Rozes presents a beautiful spectacle. If you climb in the Cinque Torre, you'll be staring at it from every belay ledge, and wondering about how to climb it. There are actually many routes on the great face, with the best climbing sharp ridges and faces on the far right. For an adventureous, but not "extreme" climber, the Dimai/Eötvös Route will provide the most rewarding tour of the face.

The route was first climbed in 1901 by a pair of semi-famous rock climbing Hungarian Baronesses: Ilona and Roland Eötvös. Their guide was Antonio Dimai from Cortina. It really is incredible what they did at the time! Also along were guides Giovanni Siorpaes and Angelo Verzi.

Despite it's inclusion in a popular guide, the route will likely be uncrowded. This is good, because in a few places the angle eases and ropes could sluff off small rocks on ledges. Be cautious climbing behind another party.

Be prepared to spend some time routefinding, as the route features some vague sections of easy ground that then lead to a key traverse. It could be easy to be too high or too low. Unlike many climbs in the U.S., the line is not always obvious.

Bring a rack of slings, nuts and a few cams. On my ascent, I didn't find all the belay stations, and only a few pitches had intermediate protection in the form of old pitons. The exception, with lavish piton protection was the extremely exposed 40 meter traverse above the Little Amphitheater (IV-).

Vid said it very well: "You start the tour in Rif. A. Dibona (2030 m), which can be reached by a narrow road from the main road Cortina d'Ampezzo - Falzarego Pass." 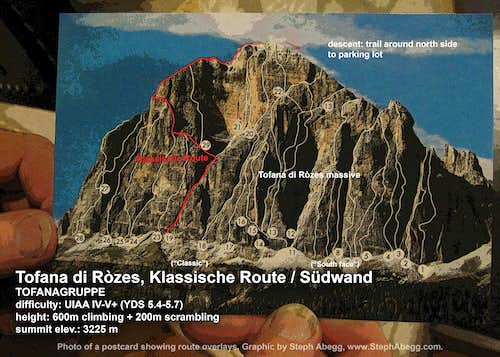 From the Rifugio, hike westward and up to the highest trail traversing below the South Face. From right below the face it can be tough to identify the massive gully coming down from the Great Amphitheater. Some hints:

1) From the trail you have to hike up a scree fan for about 200 feet.
2) The gully should be fairly broad. The climb begins on the east face of the gully via a short scramble to a ledge.
3) A few trees should be visible several hundred feet below the trail. If you continue too far beneath the South Face, additional gullies could confuse you...but you can't see any trees below from their bases.
4) There isn't any kind of marker or sign for the route, like you might come to expect with such well-signed hiking trails.
5) Hiking down from the trail on scree can dramatically improve your view of the face, you might need to do that.

Once you found the place, scramble up Grade II rock for 50 feet to a ledge. Walk a bit right on the ledge for the first real pitch. The general idea is to climb straight up for 5-6 pitches to Grade III+. The terrain will ease for a pitch, and you'll discover you are on a tower attached to the main (quite sheer) face via a chockstone. Either climb directly up from the chockstone or choose the very natural 20 foot traverse right, then back left on the main face. From a ledge on the main face, climb up and left...now the goal is to reach easy ground and traverse into the Great Amphitheater. Three pitches to Grade III+ going up and left lead to visible walking ledges to guide you in. 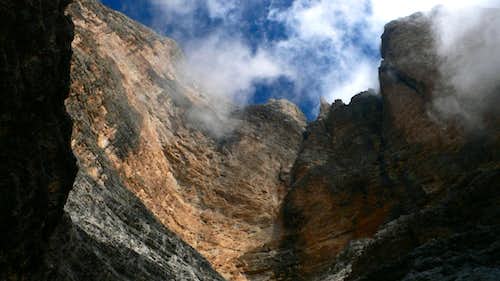 Don't linger, as the Amphitheater may be subject to more stonefall than other places. Cross it, and continue up easy though loose terrain on the left side. You are working to get back out of the Amphitheater and onto the face again. Following a natural line, you'll come to a ledge on a corner marked with a cairn. From here, climb up fairly easy rock, passing one harder (III+?) step where you go straight up on good small holds right of an overhang. Shortly above that there is a belay anchor, then another one up and left on easy ground. Belay here for the 25 meter traverse into the Little Amphitheater.

(NOTE: Another party on the route had a different topo from a more recent book. I saw this in the store later, and it seems to take a slightly different line here. Later, I saw this party come into the Little Amphitheater via a higher, different line. So, there are some variations possible).

The traverse is exposed, but not difficult (III). Now scramble up easy terrain to the right side of the headwall of the Little Amphitheater. The topo calls this terrain III, but I was barely using my hands sometimes. The idea now is to follow a ledge (mostly walking) leftward to stand on the left side of the headwall. You'll see this on the topo, although my party didn't find a belay anchor as indicated.

Now climb up and right on solid dark rock to reach a belay station at 25 meters. This next pitch warrants a good fixed belay, due to the exposure and somewhat rotten-looking rock. Ignore the topo's "direct crack variation", sorry but it looked hideous!

Traverse out right from the belay on a slanting upward ledge. Contrary to how it looks from the belay, the rock for handholds is just fine, though protection is sparse. Once you reach the end of the ledge, carefully climb back left on easier ground to a small ledge with a piton belay.

NOTE: Actually, it would be appalling to belay from this single, old, flexing piton...and I didn't see any other protection possibilities. Much better is to stop 10 feet before where currently (summer 2006) there is a fixed nut in a solid crack. Load that crack up with nuts, cams, and belay there instead! :-)

After this somewhat nervous area, the going gets much better with the first IV+ pitch of the climb. Traverse left to the end of your ledge, and climb a steep, solid, blocky chimney to a belay sling 50 meters up. Another easier chimney pitch follows, then you escape out left (the chimney becomes a dark overhanging no-man's land) onto a sunny ledge. What a glorious place it is!

Eat your lunch, then climb a short but steep pitch up and slightly left to the belay piton for the 40 meter exposed traverse. I've climbed a few things, but this place was absolutely unique! Enjoy the thrilling exposure on this well protected pitch...and don't forget to sign the route book in the halfway-point cave!

One pitch leads up mostly easy terrain (though a IV- thin section) to another fantastic ledge. The final technical pitch goes up the only possible way from here: up a chimney and behind it's chockstone. It is a joy to climb. 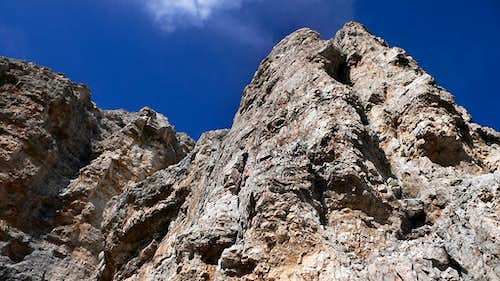 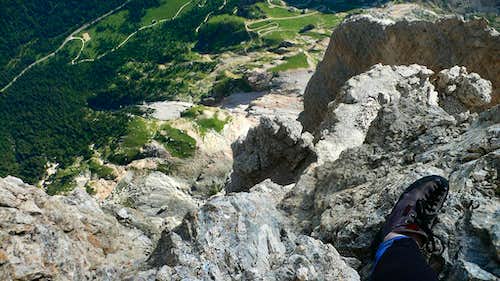 On the last pitch chockstone.

If conditions are good, unrope and scramble up a ways, changing out of your rock shoes when you feel comfortable. Follow the ridge to the summit.

To descend, take the normal way, or any other way. Personally, I wish my party had descended Ferrata Lipella...less miserable scree than the normal route! :p Though if people are coming up it, the experience would be annoying for you and them.