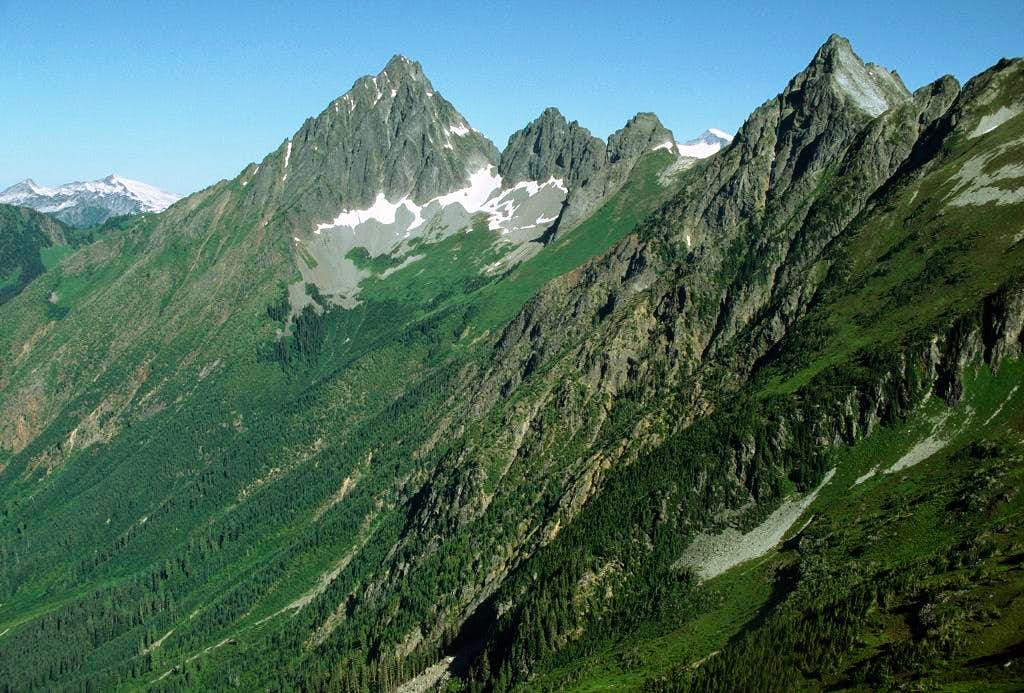 Mixup Peak and its south face are on the right. Other peaks in the view are from left: Hidden Lake Peaks, Johannesburg Mountain, Cascade Peak, The Triplets, and through the Triplets-Mixup Col is seen the top of Eldorado Peak. The photo was taken near the base of the climb to the Red Ledge on the Ptarmigan Traverse. August 4, 1988.
« PREV NEXT »

Had a rescue here...

We had a rescue here once for a climber who missed the turn coming off Mixup. He and his partner continued down the S slope gullies, instead of popping through Gunsight Notch onto the Cache Gl. He fell maybe 20 feet in a gully and broke his ankle. His partner got him comfortable, then left him to hike down to and out the Middle Fork Cascade River Trail to call for help. Mountain rescue reached him the next day.
There must be a moral in this somewhere...

Nasty! You didn't happen to be involved in a rescue attempt on Magic Mountain on I believe August 1, 1988. A 50-something woman on her first climb with the Mountaineers had a boulder shift and land on her hand and pin it, if I remember correctly. While the heli was there she had a heart attack and died. The next day in a driving rainstorm that drove us back down to our cars, we encountered a recovery team at Cascade Pass heading up to get her body.

Yeah, I did go in for a 50-y.o. woman on Magic about then. It was a failed mission for us. We spent the whole day getting a litter and evac gear to the vicinity of Magic in cold, gray weather. Al but one of the team had to get back to work the next day, and we didn't even have her location beyond, "on Magic Mountain."
We had to turn around. The next day the weather was better and a chopper hauled her out.
You remember that steep, hard snow gully you cross before the Cache Gl. - the one with no run-out before the big drop? I hated crossing that with a smooth-bottomed fiberglass litter half strapped to my back. If I'd lost my balance, it would have been a 2-second ride before going airborne for a loooong time.

Click this photo for an enlarged view - are you in the photo?

That's me in the yellow parka. Isle (pronounced like "Eileen" without the "n") Lindal is wearing her pack. The shape of the hood on my parka threw me off for a while; it's been a long time since I had one with a hood cut like that.

I tore that parka on the rescue that started this conversation. Another team was sent up the gully where we thought the subject was, while Mark Eaton and I were sent up the gully where his partner said he was. We were almost up to the Cascade-Johannesberg Col when the injured guy was found by the other team. They packaged him in a litter and he was plucked by a contract helo - Tony Reece out of Darrington - and hauled out, then the helo came back for us. Tony had a basket about 5 feet square, with a flat metal bottom and open webbing mesh sides. It dangled about 40 feet under the chopper, and when he lowered it to the ground, the sides collapsed and we walked onto it while Tony hovered above. We sat on our packs, the sides lifted around us as Tony climbed, and we were airborne, almost clipping the trees as he took us back to the meadow at the end of the Middle Fork Cascade River trail. Then we all hiked out from there. My ice axe was on my pack I was sitting on; when I stood up, it ripped the hem off my parka. I still miss that parka.

I'd almost forgotten what a soggy day that was when we headed in for the body evac on Magic. I still feel bad about not completing that mission, but we had some slow people in our party and simply didn't have the time to do it safely. All the way up, and for weeks afterward, we contemplated how we could belay a litter across that rubbly dirt slope between the Cache Glacier and Mixup Arm. If she'd been alive we'd have found a way and worked thru the night if necessary, but you don't take those risks for a body.

Thanks for digging up this photo. I enjoy the SP community as much as the mountain info it offers. It's a pleasure to have met you, even if it was almost 20 years ago!

How cool is that? Amazing!! We may have even greeted each other, although if I recall you guys were pretty intense and not looking for any new friends or wasting time on smalltalk. Next time I'm up your way we should get together. My friend Duane recently moved from over near Big Lake into a neighborhood in Burlington. I'll send you an e-mail with more particulars.