The route approach to this fun technical rock route is on the main page. This route is popular and can be crowded. Get to the climb early or try mid-week to avoid these crowds. Follow the trail to Ingalls Lake from the Teanaway Trailhead and pick the best route up the class 2 and 3 slabs and talus to the left. Look for the cleft between Ingalls North and South Peaks which marks the beginning of the South Ridge Climbs. Make a few class 4 moves up the gully to a ledge which begins the class 5 climbing

Rappel 1: From the end of technical climbing, rappel to the bolted belay ledge atop pitch 2

Rappel 2: Rappel from the chains down the face veering to skiers left. A 60 meter rope will just barely get you to Class 3 rock where you can then scramble down to the next ledge with the large boulder atop the first pitch wrapped in many pieces of webbing.

Rappel 3: Rappel from the large boulder to the talus below.

Small rack to 2" and stoppers worked great. Slings are recommended as the route tends to zigzag. A 60M rope is required. Bring webbing as the rap anchors may need replacing at times.

A note about the rock - The rock type here is serpentine which is a result of contact metamorphism when the Mount Stuart batholith (granite) intruded through a suite of mafic volcanic rocks. The orange coloring of many of the peaks surrounding the crest of the Stuart Range is a result of weathering of the serpentine rock which is not stable at the surface. Without going into a large scale geology lesson (which I can do), I will finish my statement by stating this rock is slick!!! Climb with extra care. 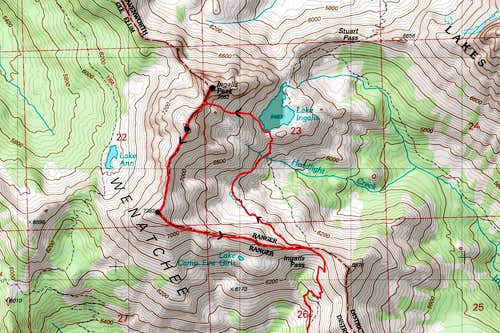 Route Map...the approach is the red line to the eastwhich passes by Lake Ingalls. The return route to the west is an option which allows you to add South Ingalls and Fortune Peak on your way back (Class 3). This brings you right back to Ingalls Pass.

Another great TR from Cascade Climbers