This is the standard route for Cutoff Mountain. It is long-- 10.5 miles from the trailhead to the top-- but not the 13 miles given in Thomas Turiano's Select Peaks of Greater Yellowstone. Aside from that distance discrepancy, though, the route description is a good one.

A little over two thirds of the route is by trail, and the off-trail portion is from Bliss Pass, all above treeline. Bliss Pass, incidentally, is not named for the scenery but rather for a rancher who used to live in the region.

Trail mileage is 7.5 miles; off-trail mileage is 3 miles. Total elevation gain to the summit is about 4300'; round-trip elevation gain is about 5200'. There are unavoidable sections of Class 3/4 scrambling on the south ridge, but exposure is not too bad and the rock is surprisingly solid for Absaroka breccia.

From Warm Springs, the trail gains over 1000' in about 1.5 mi, sometimes yielding superb views of Amphitheater Mountain and Abiathar Peak across the drainage of Soda Butte Creek.

Now the trail descends for 4 miles through the beautiful valley of Pebble Creek to a junction at a little under 7800'. There are at least three stream crossings along the way.

At the junction, bear right for the steep two-mile ascent to 9800' Bliss Pass. Note: you can trim about a mile and 100' of elevation loss to be regained by leaving Pebble Creek Trail when you are across from the drainage coming from Bliss Pass; this is right before the trail makes a prominent southward bend. Whether this option saves much time or energy is debatable; lower, there is substantial deadfall to negotiate, and up higher, the terrain becomes very steep and requires crossing some drainages not shown on the maps. In any event, one can cross the drainage from Bliss Pass to gain the trail or can continue the cross-country travel until reaching the trail shortly below Bliss Pass.

As I said, I don't know if this shortcut really helps much. Although I did use it, it was quite strenuous. But if shaving some distance matters, then this definitely helps do that. 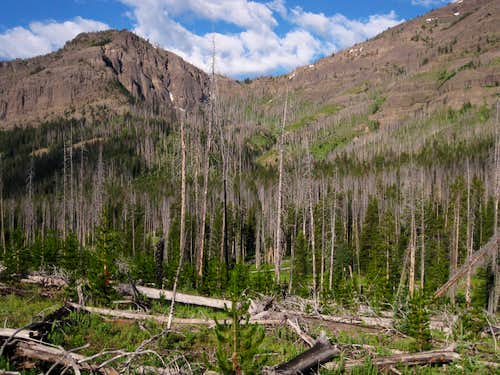 Bliss Pass
From Bliss Pass, the rest of the route is a scenic delight along open ridges. Hike north up the slopes to Point 10,296T. It is possible to bypass the summit and save a little elevation gain, but the peak, though unnamed, has enough prominence to qualify as a ranked peak, so it's probably worth tagging the summit while it's so close.

Descend to a saddle between 10,296T and Point 10,092T (not enough prominence to be ranked). The descent involves two scrambling sections that go at Class 3 at the least. The obstacles are chimneys, gullies, and small cliff bands. In my opinion, this descent was the most challenging part of the route.

Hike to the top of 10,092T and then descend north along a ridge and reach a rockier area. Find a sheep trail bypassing the first outcrop on its left side. The trail soon gets back atop the ridge the then drops onto the east side of the ridge. Follow ledges here until the sheep trail ends about 100 yards from a prominent notch next to a tower. You will soon be at that notch, but to get to it from this point would require an exposed traverse that most people would rather avoid. Instead, scramble up one of a few gullies and chimneys (Class 3 or 4) to crest the ridge again, and then do what Turiano calls a "short tricky descent" to reach the notch. In my opinion, there was nothing tricky about this Class 3 descent; the way down was straightforward and the rock was solid. But that's an opinion.

The sequence below shows the portion of the route described above.

From the notch, follow a sheep trail around the west side and back atop the ridge. The summit is now about a mile away, and it's a walk.