In his indispensable Climbing and Hiking in the Wind River Mountains, Joe Kelsey mentions a Class 3 route up Warbonnet's south ridge. In reality, this is more a climb up a series of slopes, blocks, and gullies than it is a real ridge climb. Staying on the ridge crest itself would almost certainly be more difficult than Class 3, and often exposed, and Kelsey says the route is not exposed. I would argue for calling this route the South Slopes or the South Face, but in keeping with the precedent by the sage of the Winds, I'm calling this the South Ridge here on SP even though I spent almost no time on a ridge proper.
At about 18 miles RT with around 3300' of elevation gain, this climb is doable as a day trip, but it would be more enjoyable to establish a base camp around Big Sandy Lake in order to spend a few days exploring the peaks in the area.
Warbonnet is not only a spectacular peak but also is an outstanding way to see the justifiably famous Cirque of the Towers without going over Jackass Pass. Almost every major peak in the Cirque area is visible; you can also see Mount Bonneville (maybe the crown jewel of the south-central Winds) and even all the way to Gannett Peak (the highpoint of both the Winds and Wyoming).
This route also serves as the easiest descent route for technical routes on Warbonnet with approaches originating from between Big Sandy Lake and Jackass Pass. 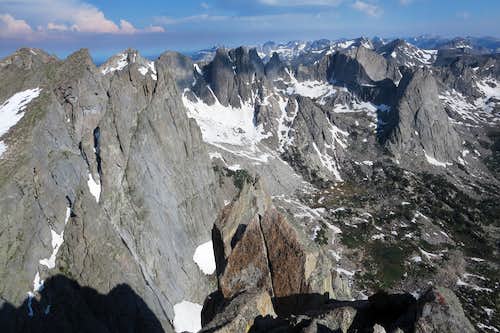 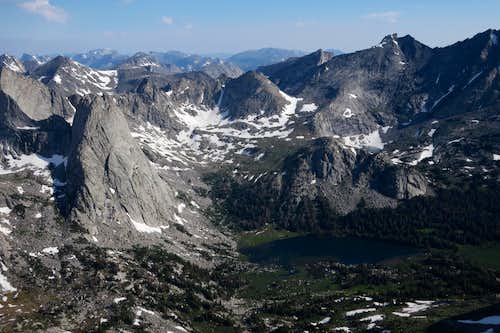 Hike an easy 5.5 miles to Big Sandy Lake; you only gain 600' of elevation during this. Trail signs say it's 6 miles to the lake, but most other sources call it 5.5. I think the 6 miles is the distance to the trail junction at the head of the lake, where one can head north for Jackass Pass and the Cirque or east to Black Joe Lake or to Clear and Deep Lakes (and beyond those lakes on an unmaintained route to Temple Lake and Temple Pass). This junction was unsigned in July 2014, but it was impossible to miss.
I recommend camping near Big Sandy Lake, but you can find some more sites as you climb from the lake to North Lake. The trail steepens considerably after the junction, though, so why not spare yourself hauling a heavy pack up it unless you plan to head over the pass?
Kelsey says to leave the trail after North Lake and scramble up the talus to the notch just south of Warbonnet, but there is a faster and easier way, and it also puts you in position to climb Sundance Pinnacle. Having done both approaches, I prefer the alternative one I am describing, for it has less boulder-hopping and avoids the rough, winding trail in the vicinity of North Lake. However, if you want to be stubborn and do Kelsey's route, see the picture below so you know what the notch looks like. 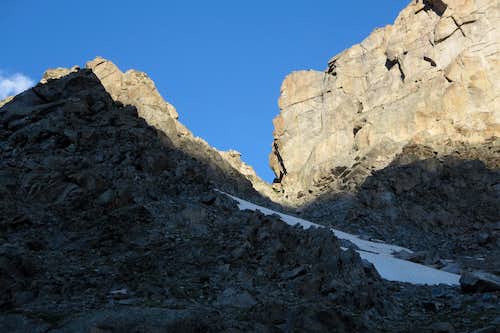 The Notch
Now for my approach...
From the junction, hike north toward Jackass Pass. Before you reach North Lake, the trail crosses the stream draining it. Just before the crossing, which is between half a mile and a mile from the junction, leave the trail and clamber your way up to the saddle on the south side of Sundance Pinnacle. (It's Class 4 up the pinnacle on either its west or south side, though technical routes exist as well.) You're at about 10,600' now, around 900' higher than Big Sandy Lake. 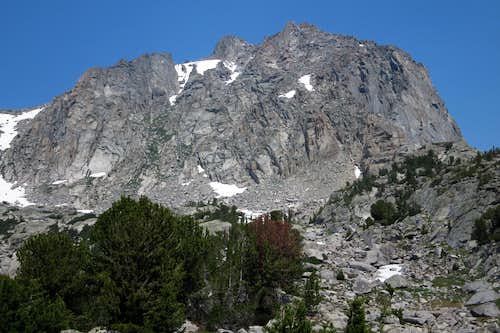 South Face of Warbonnet Peak from the base of Sundance Pinnacle
Make an easy traverse along Sundance's west side and reach the notch between Sundance and Warbonnet. Climb the 1600' up Warbonnet's south ridge to its summit. This does not have to be harder than Class 3, and it is not exposed. Really, there's not much more to say about the route. Photos below illustrate parts of the climb but by no means are essential to being able to follow it. 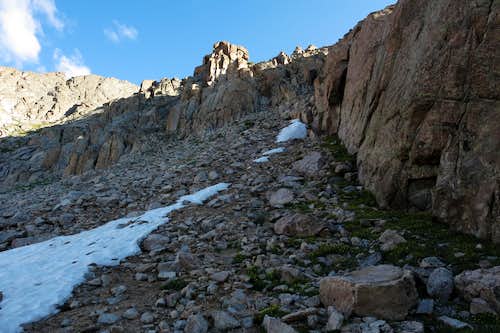 Helmet and approach shoes recommended. I never actually put my helmet on, but there's enough loose rock on the route to warrant one if you're climbing with a partner.

In July you might find an ice axe useful.