South Tarryall Peak sits on the western edge of a narrow strip in the southern end of the fabled Lost Creek Wilderness of Colorado. The peak rises above Bayou Salado Reservoir as the southern terminus of the Tarryall Mountains. This rugged, outcrop-studded 11er appears as a conical mass above several points along the Tarryall Valley. While the trail system of the Lost Creek Wilderness carries hikers within the vicinity of South Tarryall Peak, the summit of this mountain is guarded by very dense timber and burn scars, demanding patience and attentiveness of the navigator.

Views enjoyed from the summit include a close-up of McCurdy Mountain and “Lake Park Peak”, wide-open views across South Park and the distant and lonesome Pikes Peak to the east. Whole swaths of the Sangre de Cristo Mountains and the Sawatch Range are visible from the rocky summit of South Tarryall Peak. South Tarryall Peak is located in the far southern end of the Lost Creek Wilderness (on the wilderness boundary, in fact) in Pike National Forest. 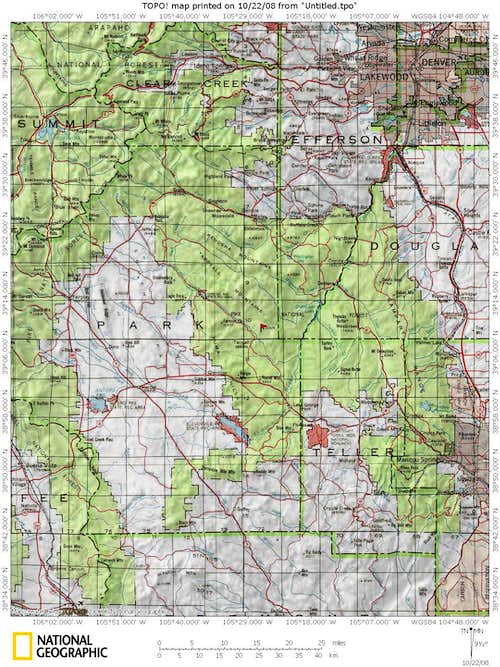 The summit of South Tarryall Peak, as well as the entire Goose Creek Route and half of the Twin Eagles and Spruce Grove routes, are contained within the wonderful Lost Creek Wilderness. Please follow LNT (Leave No Trace) principals. Looking up at the summit from the west
18 Oct 2008
Dry backcountry camping is available right at Hankins Pass. There are a few springs on the north-northeast side of South Tarryall Peak that were still wet in October of 2008. However, these are difficult to find and should not be relied on. Alternately, less than one-quarter mile west down Hankins Pass a year-round stream appears on the map. The Tarryalls are dry mountains, however, and the reliability of water sources is always iffy. If you choose to camp at Hankins Pass, there is plenty of space for tents, but carry sufficient water to your campsite. Pikes Peak from the summit of South Tarryall Peak
18 Oct 2008
The Spruce Grove Campground provides very convenient access to the Spruce Grove trailhead and is just a few short miles south of the Twin Eagles trailhead. The campground is closed seasonally, operating primarily in the summertime. The Forest Service has furnished Spruce Grove Campground with water from a pump and a pit toilet. Several drive-up sites and a handful of walk-in sites (for a total of 26 sites) are available on a first-come, first-served basis. The gurgling Tarryall Creek passing through a boulder-strewn canyon is a special treat for campers. Additional camping - south end of Hwy 77
The south end of Hwy 77 (Tarryall Road), near Hwy 24, has several established U.S. Forest Service camping areas in addition to those listed above. South Park Ranger District Lake George Area Campgrounds include: Riverside, Spillway, Happy Meadows, Round Mountain. Please contact the district office at (719) 836-2031 if you have additional questions about the campgrounds in the South Park Ranger District.
A special note on camping on the shores of the Tarryall Reservoir: Unless your idea of camping is “Rock and roll all night and party every day it is advised that you not camp in the three camping areas right on the shores of the reservoir. A quiet, good night’s sleep cannot be expected on most weekends, including the winter ice-fishing season.

North end of Hwy 77
The north end of Park County 77 and dirt spur roads are abound with off-road campsites. In particular the Rt 39 and FS 56 area provides ample camping, some with a natural water source. Several campsites off Rt 39 provide views of Mt. Silverheels, Buffalo Peaks, Horseshoe Mountain, Bald Mountain and Mount Guyot and other 13ers and 12ers that will bring tears to your eyes. Competition for these sites, however, is intense in the summer, with large armadas of ATVs and RVs staking weekend claims to favorite haunts.

Cabins, Lodges and Hotels
Numerous cabins can be rented in and around Lake George. There are also a few cabins/lodges along the Tarryall Creek catering especially to the fly fishing visitor. For example: Ute River Ranch.

Thanks to two trailheads immediately off of Park County 77, South Tarryall Peak can be summitted year-round.