In the route description for Cutoff Mountain in Select Peaks of Greater Yellowstone, author Thomas Turiano writes of a direct descent to Pebble Creek using a break in the cliffs near a prominent tower on the South Ridge. He adds that it involves the hazard of loose rocks but can save time for experienced climbers.

SP member musicman82 and I decided to use this route for our descent and found it to be excellent. In addition, we encountered very little loose rock; the loosest was probably near the top getting onto the route.

Normally, one would expect a route like this to feature a punishing amount of loose scree and would not recommend ascending something that climbs about 2300' in one mile up such terrain, but after having found little loose scree and lots of solid rock, I find myself strongly recommending this route for either an ascent or descent to experienced climbers.

Trail mileage is 4.5 miles; off-trail mileage is 2.5 miles. Total elevation gain to the summit is about 3800'; round-trip elevation gain is about 4200'. There are unavoidable sections of Class 3/4 scrambling, but exposure is not too bad and the rock is surprisingly solid for Absaroka breccia. There is also bushwhacking through a burned area, but it is pretty easy as bushwhacking goes.

From Warm Springs, the trail gains over 1000' in about 1.5 mi, sometimes yielding superb views of Amphitheater Mountain and Abiathar Peak across the drainage of Soda Butte Creek.

Now the trail descends through the beautiful valley of Pebble Creek. There are at least two stream crossings along the way before you leave the trail to make another stream crossing just before the start of the bushwhack.

Leave the trail and make that crossing at around 7900'. Not sure exactly when and where to leave? No worries. Just study the picture below; it was taken from the trail, and the weakness shown is the only obvious weakness on the mountain's face until you are near Bliss Pass. So aim for those slopes and that notch, inaccessible as they might seem from the trail. Still want a little more? Here are some GPS coordinates from the face itself: N45 01.276, W110 06.959. 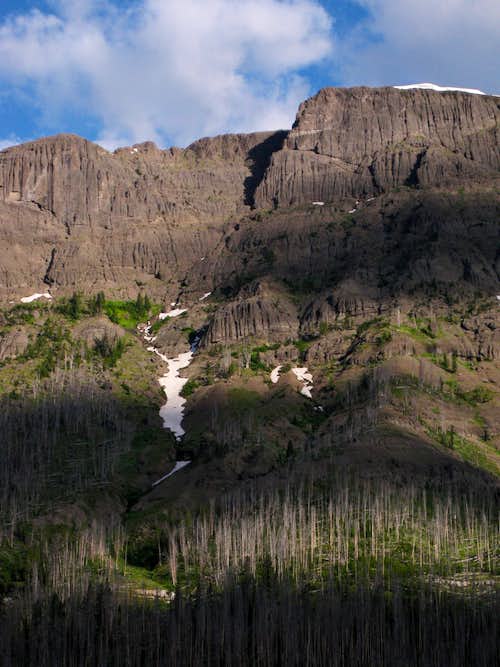 About the route between Pebble Creek and the ridge crest above, there's not much more to say. Maneuver up the drainage, zig-zagging at times to find the easiest way. Expect several sections of sustained Class 3 scrambling, and possibly Class 4, as you work up the rocks. In the steepest section, you will climb about 1400' in half a mile.

Near the top, you will see a notch next to a prominent tower. Do not go for that notch. While it's possible to do so, it would entail difficult climbing and/or an exposed traverse. Instead, aim for an area of ledges about 100 yards south from the notch. From the ledges, scramble up one of a few gullies and chimneys (Class 3 or 4) to crest the ridge, and then do what Turiano calls a "short tricky descent" to reach the notch. In my opinion, there was nothing tricky about this Class 3 descent; the way down was straightforward and the rock was solid. But that's an opinion.

From the notch, follow a sheep trail around the west side and back atop the ridge. The summit is now about a mile away, and it's a walk. 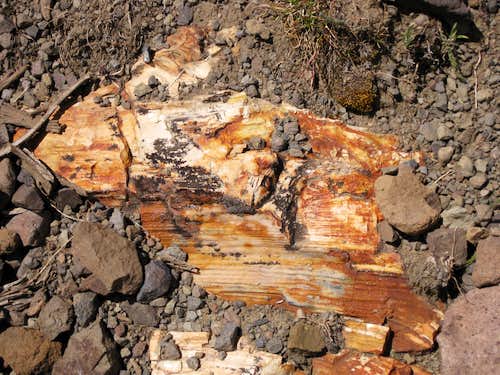