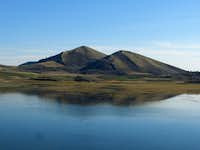 When people think of Idaho mountains they mostly think of the central part of the state, near the Sawtooths, White Clouds, and Lost Rivers. They rarely think of the mountains of Southeastern Idaho though. This, however, is a region of many mountain ranges and there is a lot of good climbing to be had. Although the mountains are mostly non-technical in the area there are many prominant peaks that offer other challenges. There are also incredible views of the Tetons, Salt River Range, the Snake River Plain and other ranges nearby in Idaho, Wyoming, and Utah.
This area consists of 11 Counties: Bannock, Bear Lake, Bingham, Bonneville, Caribou, Cassia, Franklin, Madison, Oneida, Teton, and Twin Falls Counties.

Most of the peaks in this region are shorter than the Central Idaho mountains with only two, Cache Peak (10,339 ft.) and Mount Baird (10,025 ft.), topping 10,000 ft. The majority of the highest peaks in Southeastern Idaho reach above 9000 ft. but don't quite make the 10,000 ft. mark. Cache Peak sits outside the main concentraion of ranges in Southeastern Idaho in the Albion Range. The Albion Range is the farthest west of the mountains in this area with most of the ranges concentrated near the Wyoming border. Mt. Baird is in the Snake River Range which straddles the Idaho/Wyoming border just north of Palisades Reservoir and the Snake River.

There are also a great deal of low, north-south running ridges throughout the region. Many of them are called ranges but they are quite small and can be included as sub ranges. 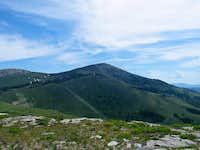 There are 11 major ranges in this area and many sub ranges. 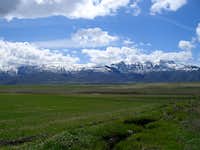 The Albion Range is the westernmost range of this Southeast Idaho area. It is a small range south of Burley, Idaho that runs 25 miles in a north-south direction from the Utah border and it contains the highest peak in Idaho south of the Snake River at Cache Peak. It is 10 to 25 miles in width. Cache Peak is the highpoint of Cassia County as well. 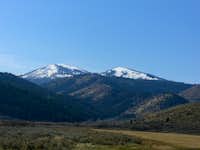 The Bannock Range runs in a north south direction for about 65 miles through Bannock, Oneida, and Franklin Counties. It's southern end is in Utah and it countains the Oneida County high point at Oxford Peak (9282 ft.)which sits on the Oneida/Franklin County line. It is also the mountain in the range and one of Idaho's most prominant peaks. 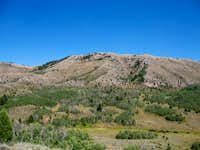 The Bear River Range is probably the longest and largest range in Southeast Idaho. Although it is half in Utah, with most of the highest peaks being there also, it still has many, many summits over 9,000 ft. in Idaho. It extends from the Utah/Idaho border, straddling the Bear Lake/Franklin/ Caribou County lines, north to Soda Springs, Idaho where it comes to a abrupt end at Soda Point. The Bear River encircles the range on the North, East, and West. The Idaho Portion of the Bear River Range is characterized by large rounded, rocky summits with thick forests of pine, spruce, and fir. The Utah portion of the range contains the high point at Naomi Peak (9979 ft.) and the Mt. Naomi Wilderness Area. The mountains there are more barren and are higher and steeper in places. The Idaho part of the range does not quite reach the same elevation as Utah side but it is more heavily forested. The Bear River Range's highest Idaho peak is Sherman Peak (9,682 ft.) in Bear Lake County. It also contains the Franklin County High Point (Point 9,484 ft.). 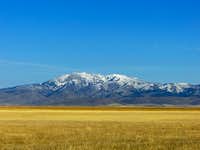 The Blackfoot Mountains are a very low profile range running about 65 miles south of Idaho Falls to Soda Springs. It contains 2 subranges. The highest point is the Blackfoot BM (7,550 ft.) but is the county high point for Bingham County. Most of the land is privately owned.

This range runs for about 30 miles between the Portneuf and Blackfoot Rivers. It is only a low series of ridges and has no prominant peaks. It does reach over 7,000 feet though.

This is considered to be the smallest mountain range in idaho. It is only 7 miles long and 3 miles wide and runs from Chesterfield south to Soda Springs. The highest point is at 6, 851 ft.

The Black Pine range is located in the extreme southeast corner of Cassia county and according to Tom Lopez in Idaho: A Climbing Guide, is "the most distinctly defined mountain range in Idaho. It is surrounded by wide valleys, and rises steeply on all sides." It runs in a north-south direction for 17 miles and offers spectacular views of the Great Salt Lake in Utah. The range is quite remote and is seldom visited by hikers and climbers. The highest mountain in the range is Black Peak at 9,395 ft. Black Pine peak is only 10 feet shorter at 9,385 and is a little more than a mile away from Black Peak. There are no other peaks above 9,000 ft. in this range but the other major peaks are all at about 8,000 ft. 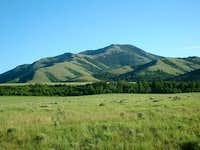 The Caribou Range lies in Caribou County just east of the Gray's Lake National Wildlife Refuge. Caribou Peak is the highest mountain here at 9,803 ft. It also has a prominance of 3,000+ ft. and rises abruptly from the marshes of Gray's Lake. In the late 19th and early 20th centuries Caribou Mountain was the site of a large gold rush that lasted 20 years and produced more than $50 million in placer gold! A large mining town called Caribou City was established at the foot of the mountain in 1897 and during its heyday boasted more than 1,500 residents. That was almost as much as Pocatello and Eagle Rock (Idaho Falls) at that time! By the 1930's it was completely abandoned and remains a ghost town to this day.
The name Caribou is often associated with this area and it can be a little misleading as Caribou do not live here. In 1870, a man by the name of Jesse Fairchild discovered gold near Caribou Mountain with two fellow miners. He was given the nickmname of "Cariboo" Jack and it was later corrupted into "Caribou". It is after "Cariboo" Jack that Caribou Mountain, the Caribou Range, and Caribou County are named.
There is one roadless area in the range.

The Deep Creek Range runs between American Falls and Holbrook and is mostly treeless and dry. It has two peaks over 8,000 ft.: Deep Creek Peak at 8,748 ft. and Bannock Peak at 8,263 ft. the range is mostly managed by the BLM except for the northern portion, which is controlled by the Fort Hall Indian Reservation. Bannock Peak lies on resevation lands.

The Portneuf Range is a large range beginning east of Blackfoot and running southeast for about 60 miles. The highest peaks are concentrated southeast of Pocatello, near Inkom, and its highest summit is Bonneville Peak at 9,278 ft. The Portneuf River splits the range in half at Lava Hot Springs and the highest peak in this southern portion is Sedgwick Peak at 9,167 ft. The northern half is managed by the Caribou-Targhee National Forest as well as the Fort Hall Indian Reservation. The southern half is mostly state and BLM land. 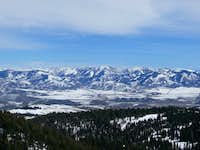 The Peale Mountains are located in the extreme southeast corner of Idaho and are a conglomeration of at least 4 different sub-ranges. The range contains the second highest mountain in Idaho, south of the Snake River at Meade Peak (9,959 ft.). Meade Peak is also the county highpoint for both Bear Lake and Caribou Counties as is sits on the county line.

This is the northernmost subrange of the Peale Mountains. It is about 10 miles long and is situated south of Gray's Lake. The highest point in this range is 8,320 ft. Lanes Butte.

At only 7 miles long this is the smallest of the subranges. It is east of Blackfoot Reservoir. The highest point is unnamed and sits at 7,800 ft.

This subrange forms the Eastern edge of the Peale Mountains. It is about 25 miles long and roughly follows the Idaho/Wyoming border. The highest point is Draney Peak at 9,131 ft.

The Preuss Range is the southernmost, and highest, of the subranges in the Peale Mountains. It is about 25 miles long and about 12 miles wide. The highest point in the range is Meade Peak at 9,959 ft. 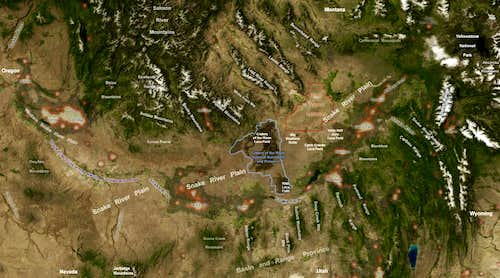 The Snake River Range lies in Bonneville County just north of Palisades Reservoir. It runs northwest to southeast and crosses the Wyoming border. This range contains a lot of beautiful backcountry and it's highest peak, Mount Baird, reaches over 10,000 feet. It is quite rugged and is also heavily forested. It has plentiful big game and an occasional Grizzly Bear as it is quite close to Grand Teton and Yellowstone National Parks.
The Snake River Range also contains a sub-range Called the Big Hole Mountains that extends north into Teton County.
There is one roadless area in the Snake River Range.

The Sublett Mountains are named after the trapper William Sublette who was in this area of Idaho during the 1830's. This mountain range extends from the Snake River in the North to the Utah border near Snowville in the South. It is not a very high mountain range and the highest peak is an unnamed summit at 7,492 feet. The highest named summit is Cedar Creek Peak at 7,464 feet. It separates the Raft River Valley from the Rockland Valley to the East.

The majority of Southeastern Idaho is characterized by ancient lava flows covered with sagebrush. The mountains, however, are thikly covered in pine, fir, and aspen. Many of the mountains are just low ridges or hills running into the Snake River Plain with trees thickly covering their north and eastern sides. South and west facing slopes are generally bare of trees. So if you are looking to the north in the majority of this region it will look quite dry and barren. It you are looking to the south though the lanscape will be one of mountains and forest. Generally the farther you go north and east the more trees there will be.

This area can see extremes in temperature during the year. In the summer it can be miserably hot with temperatures approaching 100 degrees. It can also be bitterly cold in the winter, reaching below zero quite often. Southeast Idaho can also receive quite a bit of snow during some winters.

The Majority of Southeast Idaho's mountains are administered by the Caribou-Targhee National Forest The Caribou national Forest also administres the Curlew National Grasslands in Oneida County.

The Albion, Black Pine, and Sublett Ranges are administered by the Sawtooth National Forest

For accurate and comprehensive climbing information in this area Idaho: A Climbing Guide by Tom Lopez in the recommended source. It has excellent information with pictures, routes, and history. If you climb in Idaho this book is a MUST!Much of the information on this page was researched from this book.

In dry years there will be fire restrictions. You can find this information on the Forest Service websites listed above.
Please practice Leave No Trace principles.

Some of the mountains described above are either on private land or are on the Fort Hall Indian Reservation. Please be informed of where you are and always make sure you have permission to enter these type of places.