See the main page "Getting There" section. Passenger cars park at the Governor Basin junction at 10,700 feet or with a 4WD park 0.8 mile further up the road at the small bathroom at 11,300 feet. From this point, Teakettle lies almost exactly to your north. 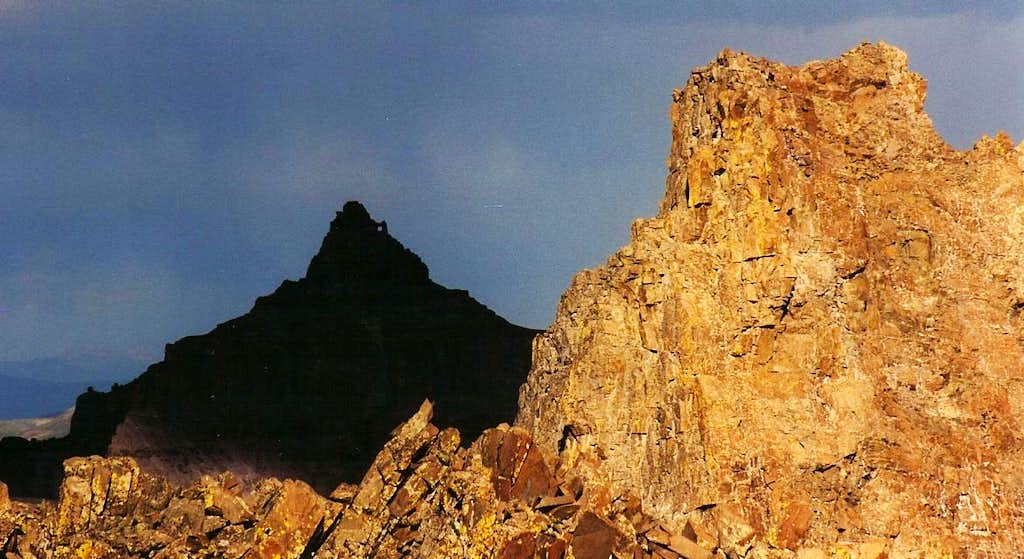 Leave the road at 11,300 and immediately begin a steep ascent of grassy ledges towards the northeast. A cliff band needs to be negotiated at about 11,800 and above this the grassy ledges slowly give way to steep, loose talus. The rock is very loose so exercise caution when climbing above anyone. Unfortunately there is no "easy" way up this grungy slope, it just has to be done. Two steps forward, slide one back...get used to it! 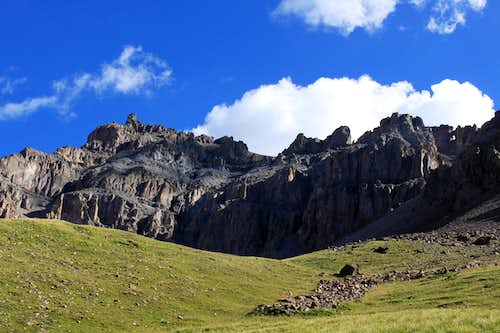 Looking up from the grassy slopes - the correct route heads up off to the right of the photo. The variation route is the ugly talus slope in the shade at center-right in the photo.

As you ascend the talus, head towards the SW ridge coming off the small outcrop known locally as the "Coffepot". You do not need to go all the way to the base of this formation but instead head to a small bench on the SW ridge where there is a medium sized-cairn at 13,415 feet. From this spot you see your first close view of the upper route on Teakettle Mountain. Study the route from here (See route overlay photo below). There is a climber's trail that departs from this bench and it is very important to find it as it's the only easy way down the northwest side of this ridge. The large Black Gully is the first step to your ascent and is easily seen. 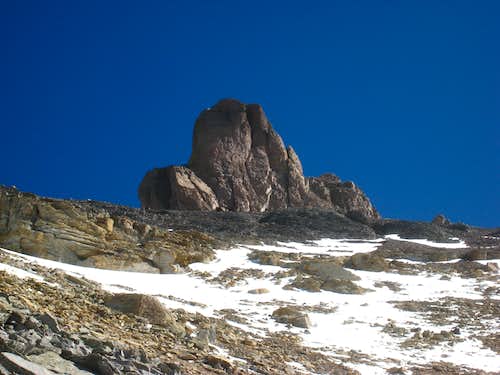 Looking up at the Coffeepot just below the view point

Descend loose scree, following the climbers trail as best as possible. The trail should take you under the southern end of a large cliff band that looks to block your descent. Contour around the basin while trending towards the Black Gully. This section is also very loose, and every caution should be taken. 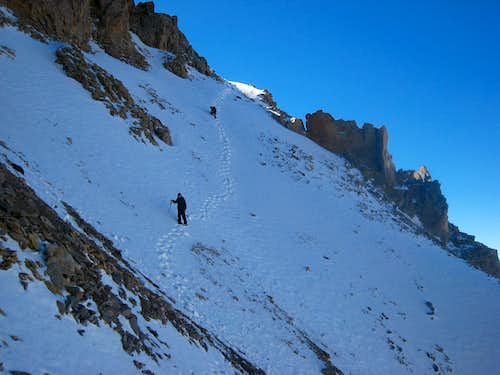 Descending from the view point below Coffeepot

The Black Gully is not as steep as it looks from farther away, but it is just as loose as one would expect. I recommend going up this gully one at a time or stop at places where your partner can be protected. The gully is starts at 13,370 feet and ends at 13,470 feet. At the top of the gully you can choose to go left or right. Left is a Class 3 exit where right is essentially climbing Class 4 dirt. They both felt about the same difficulty to me. 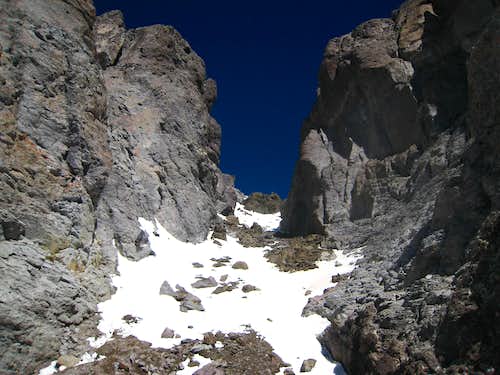 Looking up the 100 foot black gully

Once you exit the gully, relax on a large flat bench as the going gets a bit easier. The trail from here is more straightforward and easier to follow. Traverse north, then northwest on the obvious talus ledge until you get to the first large break in the cliffs above you to the right. Veer right and go up terrible scree and continue traversing northwest to the summit ridge. Continue following the south side of the summit ridge to the base of the summit block. The chimney will be very obvious as you arrive at the summit block. 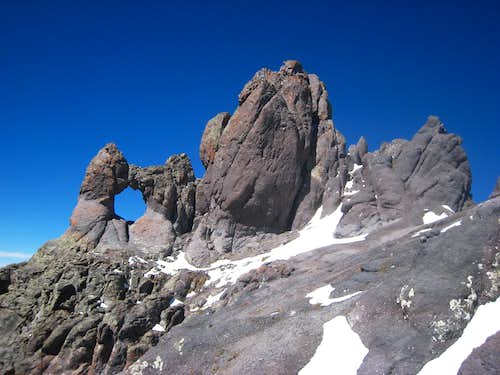 After taking your obligatory "Me in Teakettle's handle" picture, scramble up a short gully to a notch in the NE ridge of the summit block. The jagged and steep north face is eerily close right here, so be careful where you place your gear. From here climb up a couple of blocks and get into a chimney on the east side of the summit block. The rock is not great quality but it certainly could be worse. The short bit into the chimney is low Class 5. Choose the left side of the chimney for your ascent and good pro can be found in nearby cracks. The pitch is only about 40 feet long so a 30 meter rope is plenty long. Once on the summit, enjoy the position and the remarkable drop-offs on every side. Not much room up here though so keep your party to two or less for the top! When you've had you fill of jaw-dropping views, a 40 foot rappel down the chimney off a slung horn gets you back to the base. This route has been done without ropes up and down so this is an option, however with the questionable rock a rope and gear is suggested for most parties especially if the rock is wet. 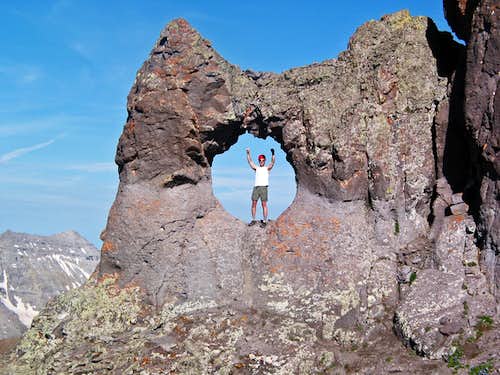 Descend your ascent route as far as the bottom of the Black Gully. From here you have two options, both horrible. One is to reascend to the SW ridge off of Coffepot and descend how you came up. The other option is to descend straight down from the bottom of the Black Gully and eventually trend over to the grassy ledges of your ascent. Either way expect loose rock, bad footing, and numerous cuts, scrapes, slips and near-death experiences. This second variation really does suck...we chose this variation on the descent and it was hands down the worst talus slope I have ever been on. Re-climbing and descending the way you came up may be the better way to go. 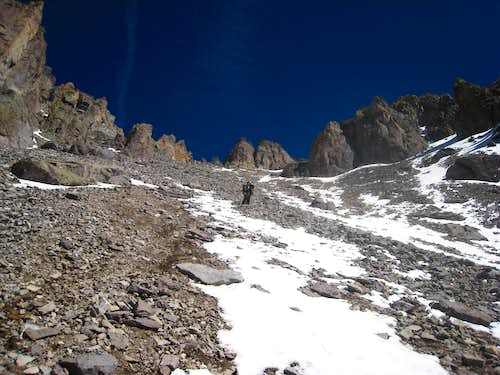 Descending the variation AKA worst talus slope ever! 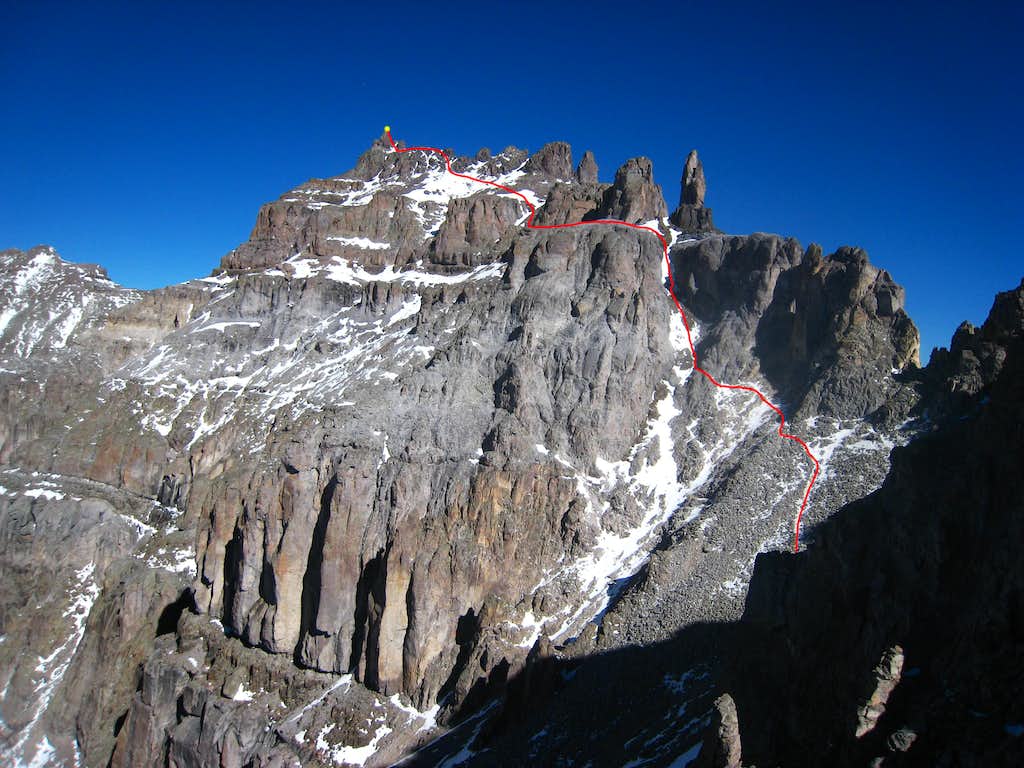 View of the upper route on Teakettle Mountain from the viewpoint just below Coffeepot. The route is drawn in

Helmet, 30 meter rope, a very small rack (Single camelots from 0.5"-2" is plenty), harness, and add an ice axe and crampons if snow is present. 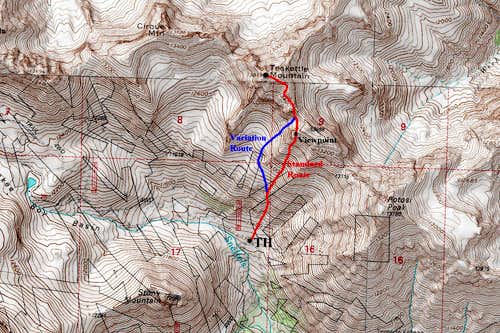