Southern Approach (BC) to Mt Assiniboine 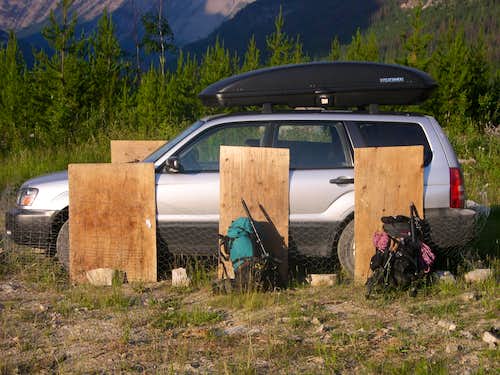 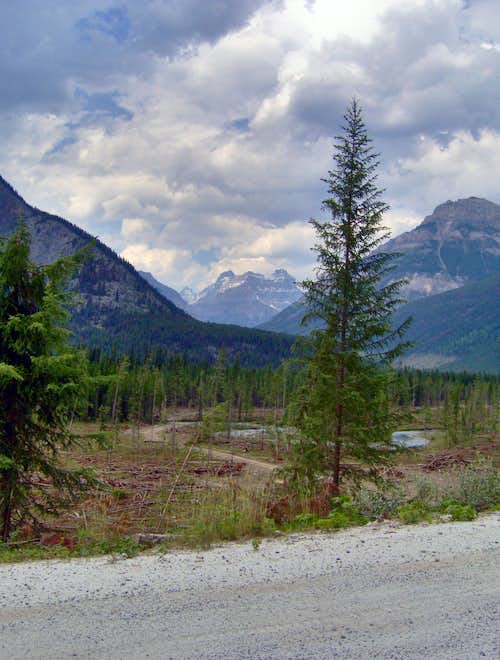 Not wanting to repeat the Canmore helicopter approach again, I found an account of a shorter and much wilder approach that Dow Williams published here on Summit Post: North Ridge (via BC) and was immediately interested. The Banff/Canmore scene was too much for this old Idaho climber who is used to going for days without seeing another human. The first trip was entertaining and Seppe and Barb run a top notch operation at the Lodge, but I vowed to never set foot in such a remote place again without carrying all of the gear I need to be self sufficient. Trying to climb a mountain with a plan built around a helicopter flight schedule and hut reservation system seemed way too much like the work I was trying to get away from. Unless you're willing to climb in the worst of conditions, the weather in the Rockies will dictate when you climb and when you don't.
Mike and I took two days to make the drive from Boise to Radium Hot Springs where we slipped into Banff just long enough to pick up Frank and get a few more supplies. Once we got back to the west side of the range we did not see another person on our entire trip with the exception of a lone guy who had hiked to the Hind Hut from the Canmore side of the range. Following Dow's excellent description we had no problems getting into Assiniboine Lake and over the Strom/Assiniboine Col to the Hind Hut.
On the day of our climb we found the route completely dry so the three of us climbed solo to the belay spot on the crest of the north ridge and only used the rope on the 50' steep section of the grey band. I think it took us about 4 hours to get from the hut to the summit. We had perfect weather so time was of no concern at this point in our climb. We sat around on the summit for about an hour and then started our descent off the South Face. We initially started down the upper snow fields on the southwest face but were forced to the south when we got cliffed out on the way down. Some say to aim for the large rib on the west side but from the top we couldn't see a way down the cliff without multiple rappels. As we headed south across the snowfields towards Lunnete, we noticed that someone had tied red survey tape at key descent spots so we followed these landmarks down numerous rubble benches, slots and snowfields until we finally reached Lunette Lake. We ended up on the wrong side of Lunette Creek and had to do a water crossing before we found the trail that leads back to Assiniboine Creek. It was getting late in the day when we got to the cabled log crossing where we found the water had risen nearly 2 feet from the day before. Realizing that a slip off the log would have resulted in a class 6 whitewater ride down to the confluence of Assiniboine Creek, we pulled out our harnesses and clipped in for the walk back. Further down, we found that the "little" creek had also risen about 2 feet. What was a hop, skip and jump the day before was now thigh deep, foaming whitewater. Our hiking poles earned their keep on this one. In between the two creeks we passed one of the largest piles of scat any of us had ever seen. My first thought was about the cooler that was in my car but luckily, we saw no other signs after that. We drove back to our camping spot on Aurora Creek with just enough daylight to setup the tent and start cooking. Before we could finish, a thunderstorm rolled in and the top of Assiniboine disappeared into the clouds for the next three days.

I know several people that have done the SW face route and the route finding is the hardest part which is why it gets flagged.

Good job on the writeup and now you should attach this to the Mount Assiniboine page, add the date climbed and pick one of your pictures as a primary picture for the upper right part of the page.

I selected a picture and attached my trip report on the main page but it didn't show up immediately. Do they have to index the site before it'll show up or did I screw up? The SP interface takes a bit of getting used to so I appreciate any advice I can get.

The system interface is not always intuitive. If you go to the attach/detach button on edit then the procedure is to attach your trip report as a child to the parent Mount Assiniboine page. If that doesn't work - go to the the mount assiniboine page and click add an existing trip report- search your contributions and then attach it as a child to the mountain page.
Bill

I had it attached as related instead of as a child. It shows up as a trip report now. Thanks for the belay!