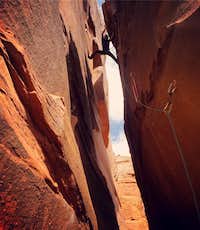 Dow Leading the Spear
Utopia is a relatively new climbing area in Moab, located on the walls just above the Colorado River past Big Bend. Although the name can be misleading (I did not find anything of “utopia” climbing value), there are a few objectives that are worth doing for the fun aspect alone: Spear of Destiny and Oebehsenuef. Both are small towers and are labeled PG 13 although neither has anything resembling “PG13” leading in my opinion. This whole area is graded soft compared to other local climbs. I would hate to see any of the Colorado suburbanites, who typically gather at Indian Creek and Castleton, get on this wall and then cross the river to give the Ramp a go (same grade range). The Ramp, although rated the same, will be a whole different world to say the least. 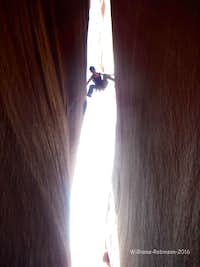 Spear of Destiny (5.9 PG13) and Qebehsenuef (5.8+ PG13) should definitely be done together. In fact I combined four routes in half a day worth of climbing at Utopia which included the before mentioned two towers and the two wall routes to the west of the Spear: Terma (5.9 PG13, 3 pitches) and SklogW (5.9+ PG13). None of these routes had any PG13 leading on them that I could decipher. I can only assume the FAers just were not use to desert sandstone.

Terma was a quick and boring climb for the most part. SklogW was not a whole lot better. But Spear was very cool. It climbs a short tower leaning away from the wall (which makes for clean rock in comparison to most climbing up and down River Road). It is well bolted with zero gear requirements outside of draws (2016). Easy and fun stemming and chimney technique reach the fixed rap atop of the tower itself which can be rapped with a single 60m rope.

Approximately half a mile beyond the Big Bend bouldering area, there is a decent sized parking area on the left side (river side) of the road. From there, head up the right side of an obvious drainage/gully. Meander up to the wall. Terma is the easiest route to spot (photo included from the parking area on the Terma page) as a left to right large ramp system. Although Spear of Destiny is a tower, it can mesh into the foreground, but I could still decipher it from the parking area as well. Terma has a full bolted first pitch just to the right of the corner/ramp system. SklogW is listed as a two pitch route just to the left of Terma (with one 5.7 route in between=separate fixed anchor) whose fixed anchor is easy to spot above a short right facing corner. SklogW is easily done as a single pitch, even top roped as a single pitch with a 70m rope. Spear of Destiny is the obvious tower (with a spear shape about it) left of Terma and SklogW. Qebehsenuef is hidden from view until you start traversing the loose hill side to the east of the Spear. It is a short 10 minute hike away.

90’+/-, 5.9 PG13
As before mentioned, there is no PG 13 on this pitch in my opinion. It is well bolted up the wide chasm. Previous beta speaks of “crazy body bridges”, etc. Any “body span” needed is in the 5.7 realm. The climbing is mostly just stemming, maybe a bit of chimney technique to get started. Towards the top, you do commit to the right wall (tower side) via positive holds and complete the climb through several more clips. Someone mentioned on Mountain Project that there were not any harder moves than the 2nd pitch on Honeymoon Chimney (the Priest) which I concur with . That rating is 5.7. That is two whole grades different which is no doubt attributed to two different generations who put each route in. If you are used to wide at all, this will just be a fun tower route. Dow

Rap with a single 60m rope.

This is a shaded route due to its nature, so reserve for the hottest time of day if you are ticking off several routes at Utopia. All you need are draws and a rope for Spear.