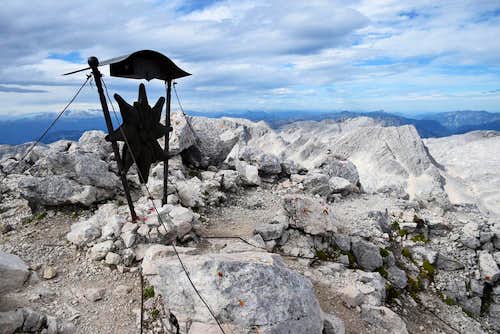 The iron edelweiss on the top of Spitzmauer
Spitzmauer is the second highest summit of Totes Gebirge – The Dead Mountains. It rises in a shadow of its higher brother – Grosser Priel which is more visited than Spitzmauer. Both the summits make a wonderful scenery, first of all from the Stodertal valley. We can see Spitzmauer and its typical shape – shark majestic limestone pyramid with about 700 meters high wrinkly east face. There is no a typical iron or wooden summit cross but a big iron edelweiss on the top of Spitzmauer.

From A9-highway you have to take the exit 36 St. Pankraz or exit 48 Windischgarsten. Then take the road to Hinterstoder. There is a car park on the right side of the road at the end of Hinterstoder, next to the house called Johannishof.

The typical shape of Spitzmauer is a limestone pyramide, seen from all sides.
Towards the east falls about 700 meters high rock face into the basin Klinserkar. Towards the north falls the rock face 600 meters deep into the ravine Klinserschlucht. There are a lot of rock climbing routes of different levels of difficulty in the east and north face.
There is a steep scree slope with big stones on the west side of the summit. The scree slope ends in the wide flat saddle between the summit of Spitzmauer and the summit of Weitgrubenkopf. Through the west side leads a final part of normal route for ascent and descent.

For hikers and climbers forms Spitzmauer together with other three neighbouring peaks (Grosser Priel, Schermberg and Temlberg) the most attractive part of Totes Gebirge. Marked paths, via ferrata routes, rock climbing routes in steep limestone walls, this part of Totes Gebirge offers that all.
Spitzmauer is the most often ascended from Stodertal valley - from the village Hinterstoder. There is a big car park on the right side of the road next to the house called Johannishof (600m). From the car park goes a broad marked path towards Prielschutz hut. A broad path goes pass the farm Polstergut to the lower station of a material cableway for Prielschutz hut. Then the path rises up to Prielschutz hut (1420m). It takes about 3 hours.

From the hut continues the marked path to Spitzmauer. At the beginning the path leads through dwarf mountain pines but soon follows the typical character of a landscape of Totes Gebrige – steep walls, big stones, deep holes and scree fields without greenery. After about an hour from Prielschutz hut we come to the crossroad in the ravine Klinserschlucht (1807m). We can see the commemorative cross for the pilot of Ju-52 Kurt Gerlach on entering the ravine. He crashed with his Ju-52 into the north wall of Spitzmauer in 1942. We have two options in Klinserschlucht:
1.   To the left – via ferrata route Stodertaler Klettersteig (B by the Austrian scale) – it doesn’t take more than 2 hours to the summit of Spitzmauer.
2.   Normal route goes around the whole massif of Spitzmauer and Weitgrubenkopf through the saddles Klinserscharte (1805m) and Meisenbergsattel (2080m). Normal route is longer than via ferrata route, it takes about 3 hours to the summit of Spitzmauer. But on the other hand it offers a wonderful scenery of limestone kettles and peaks, big stones and deep pits, almost a lunar landscape. It’s a good choice for a descent.


Both the routes are connected in the wide flat saddle between the summits of Spitzmauer and Weitgrubenkopf (about 2200m) and the last part of the route to the summit is only one.
I can recommend a round tour: the ascent via Stodertaler Klettersteig and the descent via normal route.
Difference in altitude between Stodertal valley and the summit of Spitzmauer is more than 1800 meters. For this reason is suitable to divide the tour into two days and spend the night in the very pleasant Prielschutz hut.


We can ascent on Spitzmauer from other mountains huts: from Welser hut and Pühringer hut. But these routes to Spitzmauer are much longer than from Prielschutz hut and are suitable for three-days or four-days round tour. 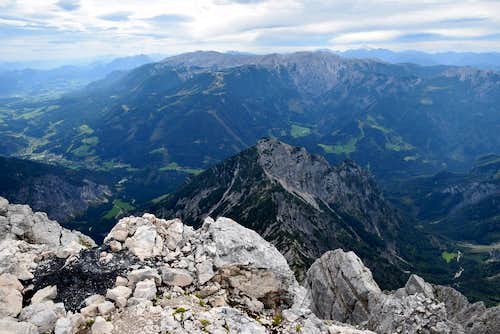 The best period for hikers and via ferrata climbers is from June to October. At the beginning of summer pay attention to rests of snow and ice – via ferrata route leads in the north face.

You have to take enough water, there is no water on the whole tour!