Spring on Sonoma and Burdell Mountain

Knees and Hills and such 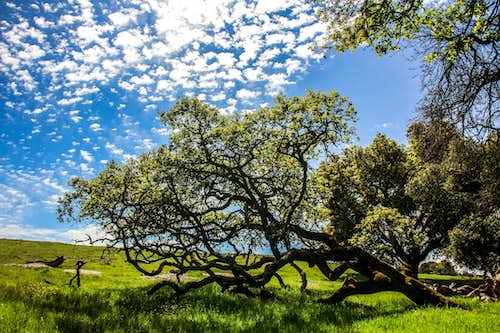 Reclining live oak on Sonoma Mtn
In early March I was on my feet most of the day working in Half Moon Bay about 30 miles south of where I live north of the Golden Gate. When I was about to leave to drive back I noticed my right knee was getting a little stiff. By the time I got across the Golden Gate Bridge it had swollen up considerably. A short while later I could hardly lift my foot from the gas pedal to the brake pedal. When I got home I could barely walk and my knee was as big as a grapefruit!
This all took place without warning  in an hour and a half. I couldn't believe it!
This was my "good knee" not the one I couldn't straighten out for 2 weeks a year ago.
I went through the ritual of the ibuprofen and ice and raising it up, staying off of it and not working the next day. The swelling gradually went down over the next week and I was able to work with a brace but obviously  no hiking.
About 10 days on I was out hiking again but not pushing it and had an appointment with my chiropractor. When he checked me out one leg was a half inch longer than the other! He knew exactly what was going on.
My orthotics were old and worn out and my pelvis was out and muscles in the back were tweeked etc. The poor knees were taking the brunt of the stress.
He adjusted me, got the legs evened out, gave me some exersises, taped my arch and I was on my way for an afternoon hike with plans to get new orthotics in a week or 2.

Roadside poppies by Sonoma Mtn. Rd.
You have to make the best of the spring window when the hills are green and lush, the sky is usually clear of haze and the flowers are out. By late May or June depending on the rainfall the streams dry up and everything turns brown with the onslaught of summer. 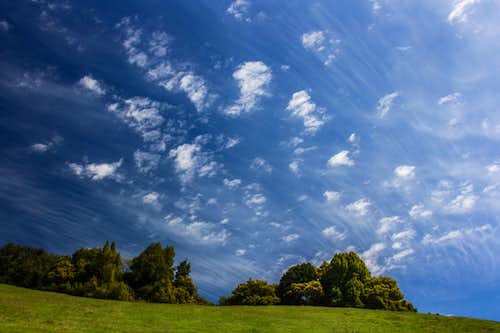 Cloudplay above Sonoma Mtn.
It was a beautiful  day March 29. I decided to throw the dice and wing a trip up the west side of Sonoma Mountain (2,463') a massive rolling hill about 20 miles north. There's a well known trail up the east side out of Jack London State Park but I wanted to go up the open grassy slopes on the west with better views and lots of sky and open hillsides. Only problem was it's all on private property.
According to the topo map there were only a few structures from an elevation of about 1,300' by the road that goes all the way to the top. I figured I could park there and have an open hike the rest of the way up. All went according to plan but I failed to take into account the fact that the topo map was maybe 30 years old. When I got about a half mile up there was a big sprawling mansion ahead. I decided to cross a meadow and a small ravine to go up a forested ridge to avoid being seen. After about another half mile up through the trees I came to some stables, fences and a summer house with a vehicle parked in front. There was really no way to continue without being a total sitting (or in this case hiking) duck for trespassing.
I just decided to go back before I got busted. Drove up to the top of the mountain but it was all private prop. so I decided to go back to Marin and find another hill to hike because it was such a nice day and I didn't want to waste it. Nevertheless I got some nice shots from the big spreading grassy west slopes of Sonoma Mountain in the process. 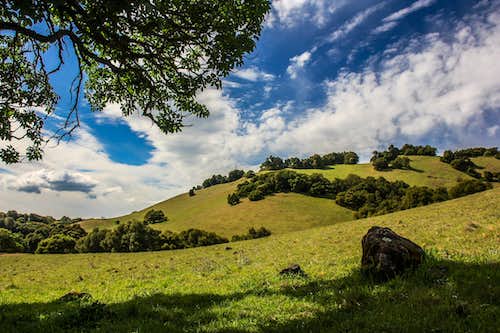 Burdell Mountain lower south slope
It was lunchtime now and I thought about stopping to eat but had a bag of roasted peanuts for the drive back which are a meal in themselves. After a few handfuls I was well fortified and ready for a trip up Burdell Mountain (1,558') in northern Marin County. All the elements were present for an enjoyable hike to the top and back with beautiful green hillsides, swirling clouds and a colorful splash of poppies and afternoon light at the end of the hike. Though I've hiked the mountain many times and even done a mountain rock page on it I found out the only quick way down from where I was at near the top without winding up on the other side of the mountain was off trail through a forest and down a steep open slope. But this brought me to some beautiful spots. I noticed once again that letting things take their course and just persisting can bring pleasant surprises in the end.

And your photos are just gorgeous - so beautiful, every single one of them!!! I wish I could have done something like that during Easter vacation...but winter just won't let us out of it's grip here in Europe yet!
Cheers, Windsor,
Eric

Thanks much Eric!
Aah yes, the perks of sunny California. Nevertheless I would love to have access to all the gorgeous mountains you bring to us on SP.

...and beautiful gallery, Windsor. The light in the pics is special!
Cheers.
Silvia

Thanks Silvia. The clear light of the springtime around here can be very healing.

You make the hills look so beautiful and I liked your write-up also!

Thanks Kathy! Nice to here from you. It is beautiful around here right now. I just took a hike yesterday and got loads of hillside flower shots. Are you still planning the Yosemite trip? Let me know if you want any tips on places to go.
-Windsor

Still coming to Yosemite in May; I will definitely be writing to ask some questions!

A blast from the past...

In the early 90's I lived in Novato and worked in Santa Rosa. I was a runner in those days and spent many wonderful days running up and down both mountains of which you write. Your article triggered great memories and warmed my heart. Thanks!

Thanks mac. Glad I could refresh fond memories of the area, especially during the best time of the year.
-Cheers, Windsor