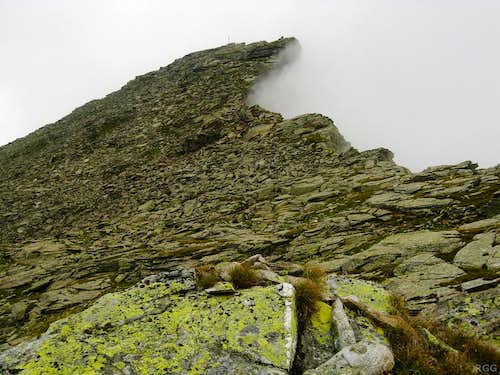 Approaching the summit from the west
The Spronser Rötelspitze is a peak in the southeast corner of the Texel Group. There is nothing higher nearby to the south or east, so the views are good - that is, if the weather cooperates more than on the day that I went up.

Three ridges come together on the summit: from the east, the west and the north. Of these, the eastern one is the steepest. From the summit, it quickly drops down well over a 100 meters before rsing again to the Kleine Rötelspitze (2545m). But all the ridges pale when compared to the south side: that's a sheer vertical face, with a drop of more than 500m! When coming up the normal route, from the west, you get to see it in profile, and that's quite impressive.

The normal route to the summit comes from the west. It's mostly hiking, only very occasionally do you need to use a hand. It starts at the Hochgangscharte (2441m), almost one kilometer to the west. That's also the key saddle, which gives the mountain a prominence of 184 m. The parent peak is Tschigat (2998m), 3 km to the west. 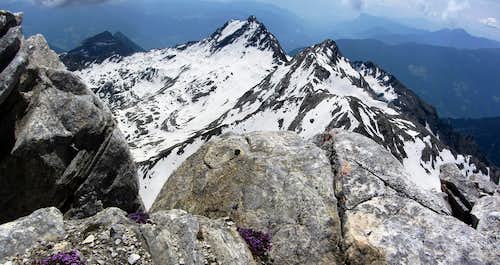 Lodner summit view.The ominous dark shape on the left is the Spronser Rötelspitze, the prominent snow covered mountain in the center is Tschigat, and the somewhat less impressive peak to its right the Lazinser Rötelspitze.
The mountain is located at the southern edge of an undulating high plateau that is the home to a cluster of scenic alpine lakes, the so-called "Spronser Seeen". These lakes themselves are a popular goal for hikers.
Many of the lakes can be seen from the summit. The largest one is the Langsee, which, as the name suggests, has an elongated shape and is about 1 km long. Its southern tip lies just north of the Hochgangscharte.


The green paddle points at the summit.Click here to view a larger map

Sometimes the 'e' at the end is omitted.

The Spronser Rötelspitze lies in Süd-Tirol, a relatively autonomous region in Italy these days. The main language is German. In earlier days, that was different: German was suppressed, and all geographical features received Italian names. In Italian, the mountain is called Cima Rosa.
Confusingly, the Lazinser Rötelspitze (3037m), a little further west in the Texel Group, is also called Cima Rosa in Italian. The two are not direct neighbors though; Tschigat lies between them. 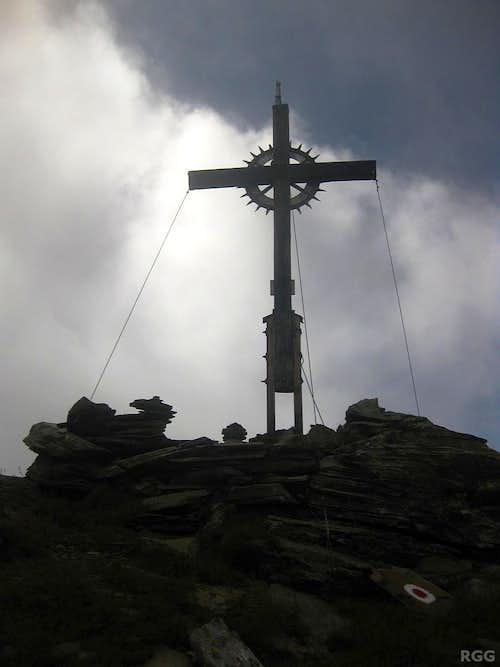 The summit itself isn't big, but the area around it offers room enough for a sizable party. The exposure isn't really serious as long as you don't get too close to the southern edge. A large cross marks the spot.

The nearest city is Meran, a pleasant place southeast of the Texel Group. In summer, the area attracts a lot of visitors and for a small city it is well connected.

Meran has regular train connections with Bozen / Bolzano, which is well connected to the rest of the Italian rail network as well as to Austria and Germany to the north. In addition, a regional train heads up the Vinschgau valley, west of Meran, as far as the small village of Mals. 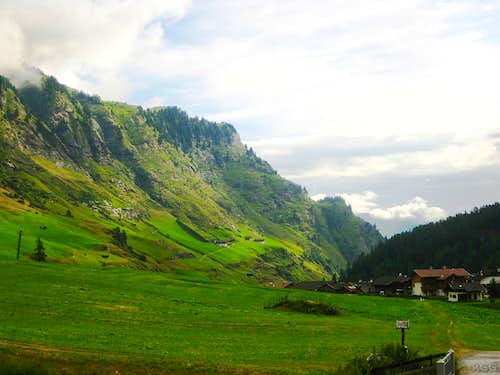 View down the Pfelderer valley, with Pfelders on the right

On this side there are two good options to save some energy. The shortest approach starts by taking the lift from the village of Vellau (908m), west of Meran, which brings you to the Leiter Alm (1550m). There is parking space at the base station of the lift, or you can get there by bus or by yet another lift from Algund. Alternatively, from Dorf Tirol (573m), a village just north of Meran, a cable car can quickly whisk you up to Hochmuth (1361m). Again you can park at the cable car station, or take the bus from Meran.

If you don't want to use the cable car, in the vicinity of Meran the highest place to park your car is at Gasthof Walde (1310m), just above the hamlet of Vernuer, north of Meran. However, from that trailhead the approach starts downhill and you'll loose about 250 m before going up again.

The most convenient northern trailhead is the village of Pfelders (1628m). The Pfelderer valley is a side valley of the Passeier valley north of Meran. Pfelders can be reached by bus, and there is ample parking space.

On the OSM map, the mountain is called Rötl 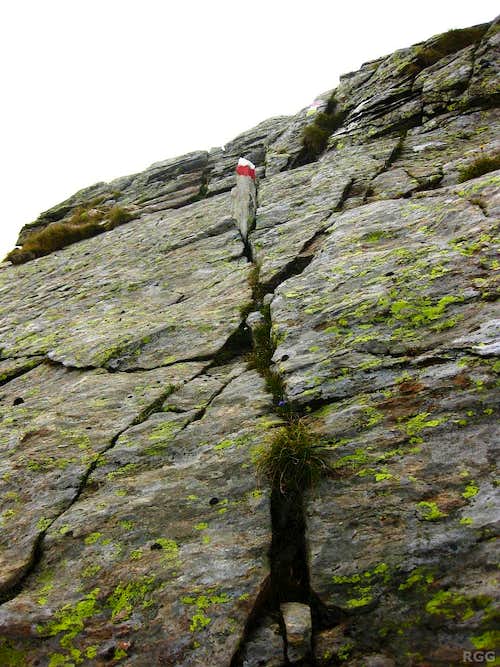 A funny route marker on the W ridge, pointing out that the route goes straight up here. It's just a few meters, but you'll need a hand now. 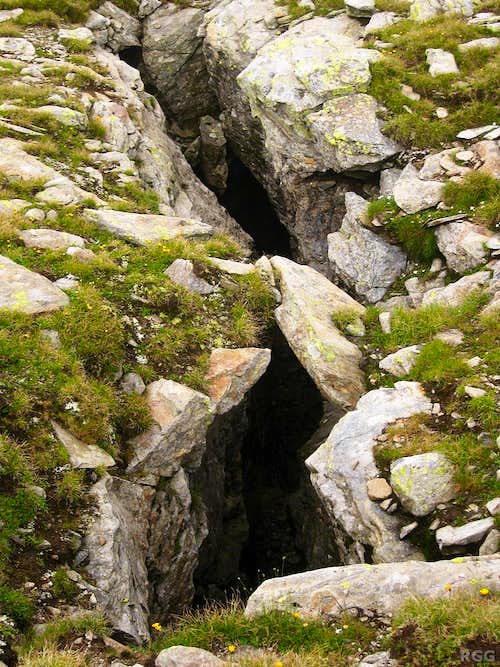 Rain and erosion have created some dangerous holes
The normal route is up the west ridge from the Hochgangscharte (2441m), a high saddle. The route is marked.

At first, it's a mix of hiking and some easy scrambling. There is one spot where the trail traverses an angled slab, and as a precaution there is a rope to hold on to in case you slip. When I descended, another hiker thought it wasn't necessary, but grabbed the rope just in time when she did start slipping anyway!


After a short while, the summit comes into view. The route now cross a sort of plateau before the ridge continues going up again. On this plateau, there are some large holes in the ground, caused by rain eroding away the softer rocks. Be careful not to fall into one of these!

After the plateau the ridge rises again, and you may occasionally want to use your hands again.


Overall, although there is a little bit of scrambling required, it's too short and too easy to deserve a UIAA grade.

From the saddle to the summit takes the better part of an hour.

A very steep hiking trail heads up the south side of the scharte. If you start at the Leiteralm, follow the Meraner Höhenweg west for 1-1.5 hrs, until you get to Schutzhaus Hochgang (1839m). A not all to clear sign marks the turnoff. From there it's 1.5 hours to the scharte, which means it's 3.5-4 hours from the Leiteralm to the summit by this route. 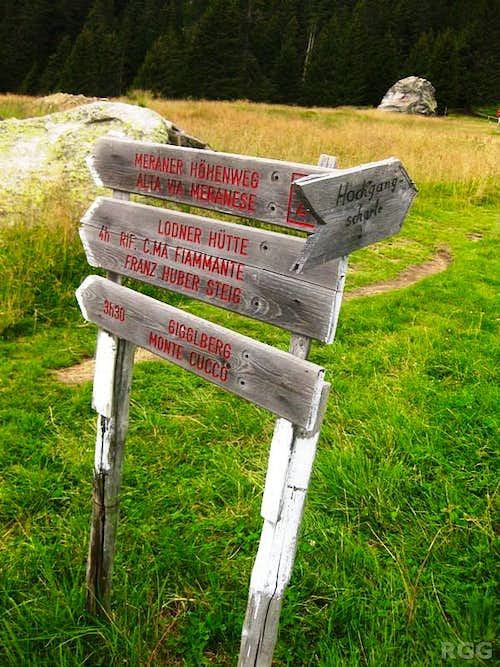 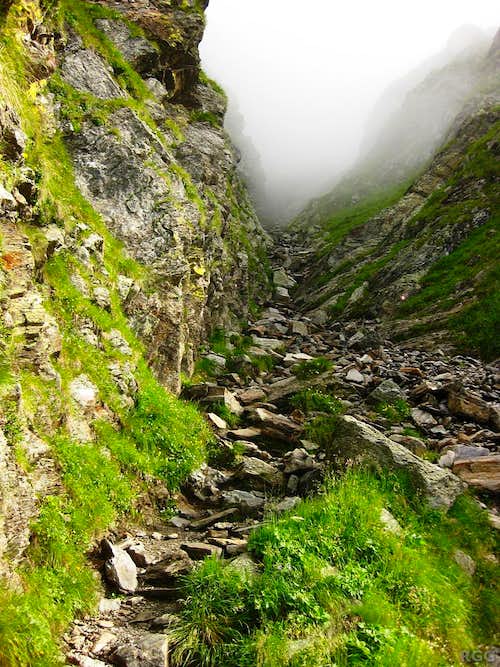 If you start at Hochmut, follow the Meraner Höhenweg west as well, and after an hour you'll reach the Leiteralm.

If you start at Gasthof Walde, again follow the Meraner Höhenweg, and count on another two hours. In other words, if you want to do this as a one day trip, you have to start very early or be fast.

From Pfelders, the approach heads up the Faltschnaltal to the Spronser Joch (2581m). From there, continue south, passing a few small lakes along the way. You'll loose some altitude. Just south of the Grünsee / Lago Verde is a trail junction: go right here, initially to the west. A few minutes later the trail reaches the Langsee / Lago Lungo, the largest of the Spronser lakes. The Hochgangscharte is just south of its southern tip. From Pfelders it's 4 to 5 hours to the scharte, the other way around 3 to 3.5.

From the Leiteralm, the scharte can also be reached from the north. As before, start out west on the Meraner Höhenweg. However, at the first trail junction go right, following the steep trail to the Taufenscharte (2230m) to the north (trail 25). Once across this saddle, the trail traverses the northeastern slopes of the Spronser Rötelspitze, eventually leading to the Grünsee where it joins the approach from Pfelders.

From Hochmut, a variation on this theme is possible by ignoring the Meraner Höhenweg altogether and instead traverse the Muthspitze to get to the Taufenscharte.

From Gasthof Walde, the northern approach is shorter than the southern one. Once more this approach starts west on the Meraner Höhenweg. After dropping some 250 m in about half an hour, the trail reaches the Spronser valley, with the trail junction. Take the trail up the valley, to the Spronser lakes and the Bockerhütte (1700m). Continue past the hut towards the Grünsee. 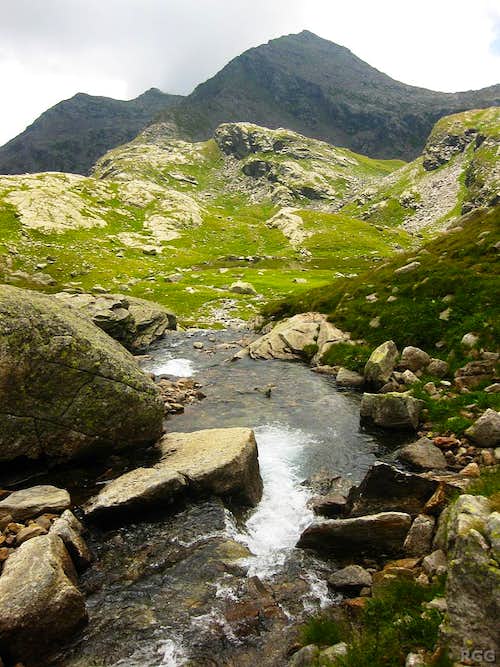 According to the Alpenvereinsführer Ötztaler Alpen (see below), the N ridge from the Kasersee / Lago della Casera takes 1.5 hours. I haven't tried this route. 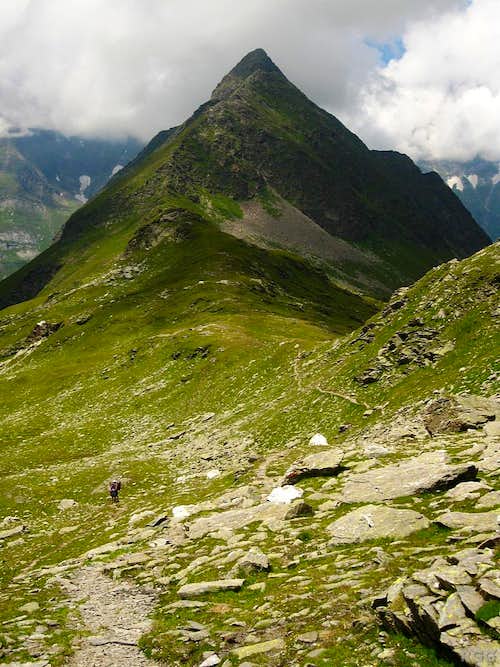 For a day trip, the Leiteralm is the most convenient trailhead. You can partly make it a circuit by heading up the Hochgangscharte from the south, going to the summit and back and then return over the Taufenscharte. If you feel experimental, by all means explore the N ridge and let me know the result. Or even better, write a route page for it.

If you have more time than just a day, the possibilities to put together longer trips and climb several peaks in the Texel Group are endless. As an example, when I climbed the Spronser Rötelspitze I started in the Vinschgau valley with a cable car ride with the Texelbahn, from where it's 3 hours along the Meraner Höhenweg towards the east to reach Schutzhaus Hochgang. The next day I climbed the Spronser Rötelspitze, went back to the Hochgangscharte and then headed north to Pfelders. In fact, I wanted to traverse the Erenspitze along the way instead of hiking down the Faltschnal valley, but wasn't happy with the grass and somewhat loose rocks I found at the base of the south ridge. According to the guidebook, it's UIAA grade II. Maybe something for you?

The best period is from late spring to early fall. Having seen the sink holes high up the west side of the mountain, I wouldn't like to go up there when there is more than just a little snow. 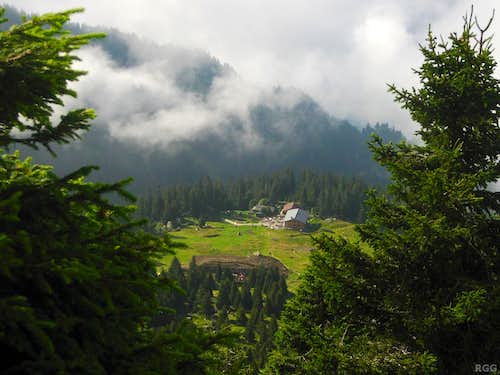 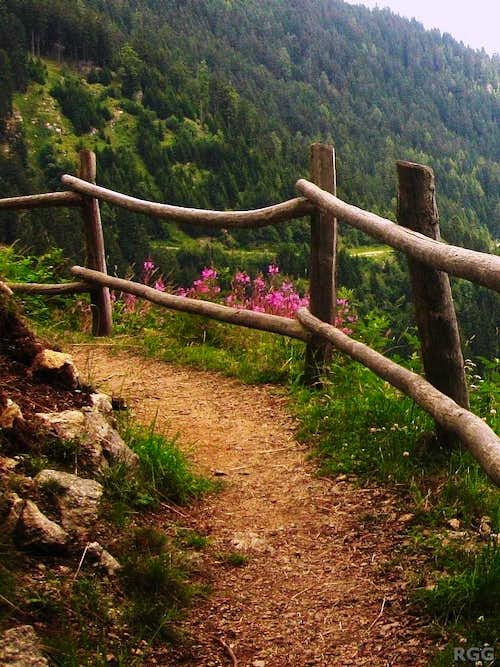 Along the Meraner Höhenweg there are many more places to stay, including the Leiteralm, Hochmuth and Gasthof Walde.

And in Meran and the many nearby villages there are countless accommodation options. 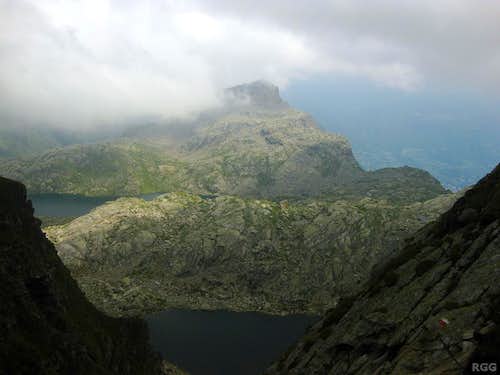 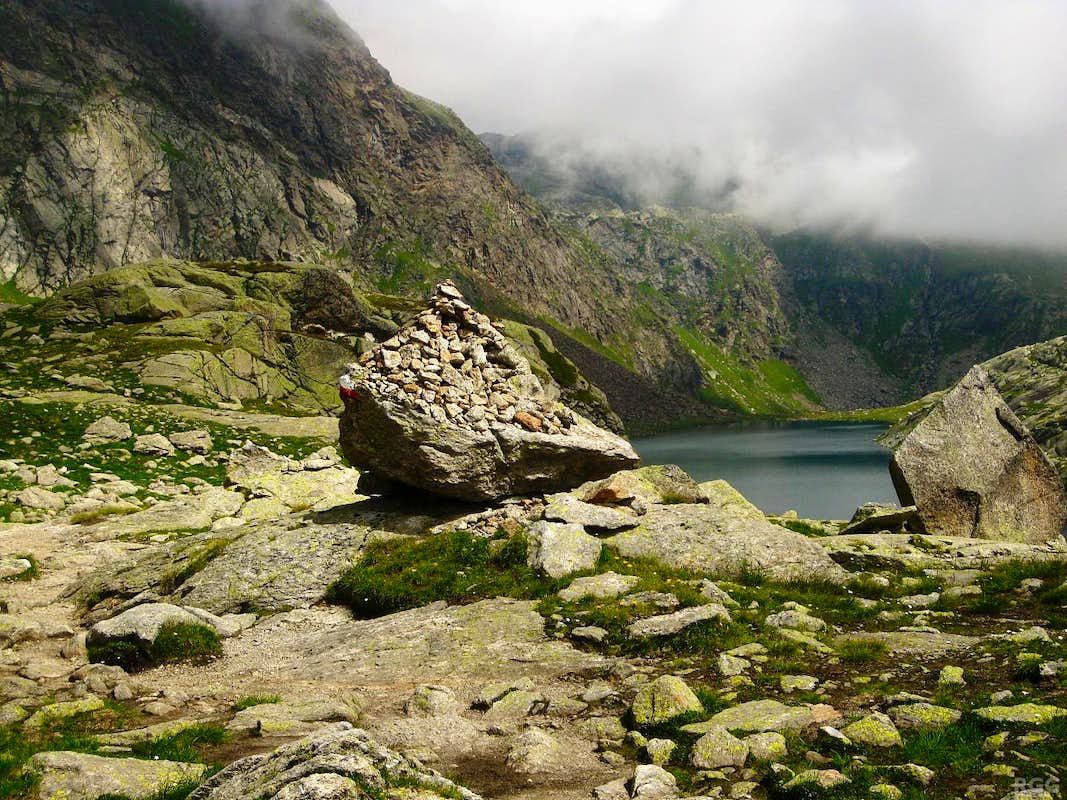 A big cairn marks the Hochgangscharte, with the Langsee to the north