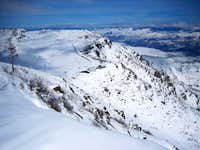 Squaw Butte is one of the most prominent peaks in the Treasure Valley.  Although Shaffer Butte (Bogus Basin Ski Area) and Lucky Peak stand taller, Squaw is the most striking ridgeline if viewed from the south or east (viewed from the Boise area).  The Squaw Butte Ridge is about 8 miles long, runs generally north to south, and has a steep eastern front that rises from about 2500 feet near Sweet and Ola, Idaho to 5500-5800 along the top of the ridge. If viewed from the south or east, it appears that the Squaw Butte ridge is a separate or island-like mountain.  In actuality, it's an extension of the Boise Mountains that juts south from the main area of most peaks. The peak is chock full of igneous, or volcanic rock cliffs and boulders. This is unique to this vicinity, as many of the nearby peaks to the east contain granite based rock outcroppings. 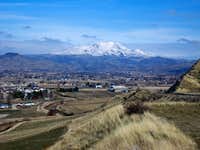 Squaw Butte provides the hiker or scrambler with many varied and interesting routes. Generally, the routes from the west offer more gentle approaches via jeep roads from near Emmett, Idaho.  There are no roads up the eastern side because of the steepness and this is the preferred approach for those seeking solitude and a challenging scramble.  The peaks impressive Southeast Rib is full of Class 3-4 rock towers and even the open slopes in the winter offer steep and fun snow-shoeing. The summit ridge is long and contains 7 radio towers near the service road's end, along with a fire lookout tower.  North of the lookout summit is another point which is actually the high point at 5894, yet on the USGS map the area south of the fire lookout is marked as Squaw Butte. This might be because this section of the Squaw Ridge, if viewed from the east, is the most impressive with sheer rock cliffs and steep, open slopes. 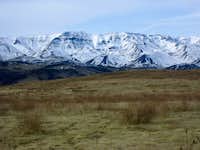 South Ridge- this route avoids the rocky SE Rib by ascending directly west to a point just north of Pt 5539 from the east side. Follow the ridge directly north over a rocky ridgeline to the lookout tower, and further north to the high point if desired.

Corral Creek (West Side Road)- this route is the jeep road that can be taken to the summit on the west side, but is not recommended during the winter because of the snow mobilers.  During warmer months this makes for a pretty good mountain bike ride, or a decent run. 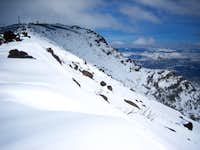 Obtain Route 52 from either Emmett or Horseshoe Bend Idaho. The turn-off is right at Black Canyon Dam and the road is marked Spring Creek. Follow this road north with the route and peak visible most of the time. For the eastern climbs, park about 5.6 miles north on this road at a spot just before the roads turns east and drops down.  There are ranches in the area, but the eastern flanks are all public land. Private land-owners in the area have been known to question what your doing there. One old man told us the road was his (false), and said he was looking for the marijuana plants that people were growing near here.

Long Hollow Creek comes down off of Squaw Butte and crosses Spring Creek Road very near where the ideal parking spot is for the East Side Routes. Follow the upper reaches of Long Hollow Creek (Burned in 2006) from about 3900 feet to about 4450 where you'll be at the base of the Southeast Rib.  From here, ascend steeply between the volcanic rocks toward the lookout summit.  More challenging terrain can easily be avoided by either weaving in and out of the rocks, or coming out onto the open slopes just west of the Rib. 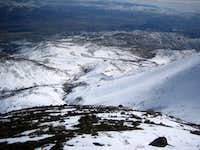 Native Americans used the slopes of Squaw Butte as their wintering ground and it's been claimed that they, not the white man, assigned the Squaw name to this prominent landmark. Nearby Timber Butte is also known as a wintering area and the region's volcanic rock has been used by natives to quarry and make weapons. In the early 1800's white men settled the area as ranchers, farmers, and gold miners. The tiny towns of Ola, Sweet, Montour, Letha, and Roystone were some of the first settlements with the town of Emmett developing into a prosperous fruit farming area (due in part to the fertile soil).

In 1924, the Black Canyon Dam was constructed on the Payette River, which runs just south of Squaw Butte. This dam was made with the distinct volcanic rock of the region. Freeze Out Hill, just south of Emmett on Route 16 drops down steeply into the valley and was named because the old wagon teams had to slide their wagons down the steep hills by "freezing out" the wheels. The lookout area here provides terrific views of Squaw Butte. 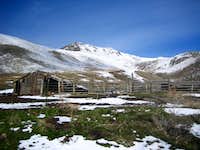 Access is usually possible year round, with the lower approach roads being very muddy at times. Squaw Butte is often easily covered with snow, when the valleys get just rain, but it accumulates much less snow than other taller peaks just to the east and southeast. Summer time can be downright hot, and if done without snow, this peak may seem rather trivial to most. The recommended time for climbing is from February to March. The summit ridge often has windy conditions compared to the lower slopes, as this is one of the first prominent peaks that weather systems encounter when moving in from the west. 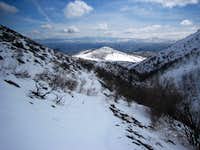 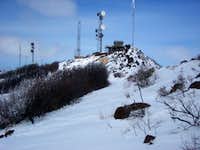