Coming from Reno, Nevada to Squaw Valley with a bunch of eager hikers, I endeavored to hike both Peak 8506 (now called Entin Peak) and Silver Peak on the last day of Spring 2009. Entin Peak alluded me in April 2007 when I attempted it via another route, but had to turn back due to inclement weather and snow conditions. In contrast, this time it was a warm, clear day and there was far less snow was on the ground.

My fellow hikers were going to hike Anderson Peak via the Pacific Crest Trail. The hike was too long for my taste, but I was happy to start the hike with them and break off after a little over 2 miles.

I was uncertain exactly what would await me in the miles ahead. I knew there was no trail to get to the two summits, and I would have to improvise. What I experienced was a series of mini-adventures into the unknown. The first was getting up to the summit of Entin Peak up the steep ridge. The second was the one-mile traverse between Entin Peak and Silver Peak, and the third was heading back down the steep ridge from Silver Peak, dropping 2,000 feet in two miles.

The start of the hike was a leisurely. The group stopped occasionally to take photos and enjoy the scenery. After two miles we hit a meadow heading directly towards rocky cliffs. 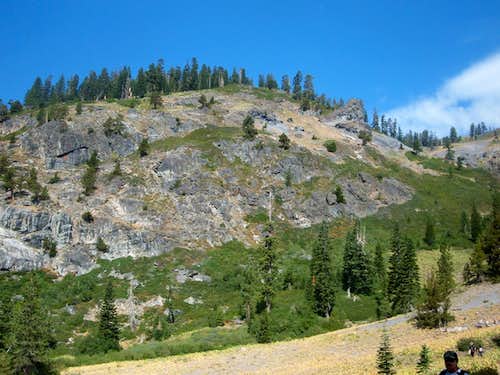 The trail continued along the rock cliffs

I left the trail once we started climbing up the rocky cliffs. I intended to leave once we hiked high enough to get above the rocky cliffs. It only took about ¼ mile up the trail to reach that point. The turn off looked like the logical point to head up the ridge. It turned out, I was exactly right in my assumption. Still, exhilaration filled my lungs and heart, knowing that I had no trail anymore to guide me. Now it was up to my own route-finding skills and sense of direction to get me to the tops of these mountains and back down safely. My fellow hikers told me that if they they saw my car when they returned that day, they would know there was a problem. I said my goodbyes and headed up alone. 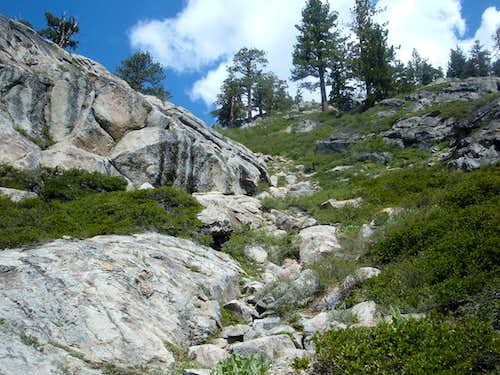 Turn off point from the Granite Chief Trail

The slope was steep, but not too bad. I went a tad bit too far northeast and ended up on the side of the mountain. However, with only a minor correction, I cut back west and found myself on top of the ridge. I was exactly where I wanted to be. Peak 8506 was now really close. After a short walk, I was out of the woods, and at an open ridge. I took in the gorgeous view towards Granite Chief, Needle Peak, and Lyon Peak in the distance. 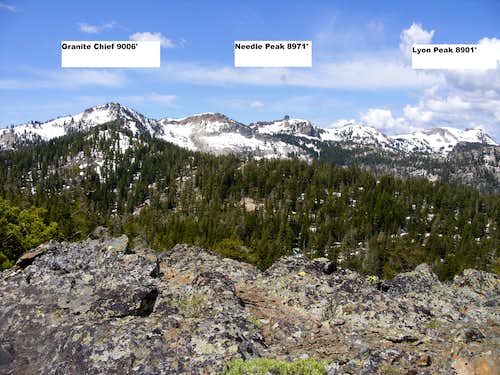 I hiked up the open meadow slope, and reached a plateau just below the summit. I could see Tinker Knob and the ridge that my fellow hikers were planning on attempting that day. It seemed to me that I had found quite a short-cut to Tinker Knob, which was only 2½ miles away. Of course the ridge might have been a bit to challenging for some of them and probably involves lots of nasty class 3 moves, but it seemed like a shortcut nevertheless. I was tempted to head to the ridge to the north, towards Tinker Knob. However, I had to get back home by late afternoon, and didn’t have the time today to take in the experience. 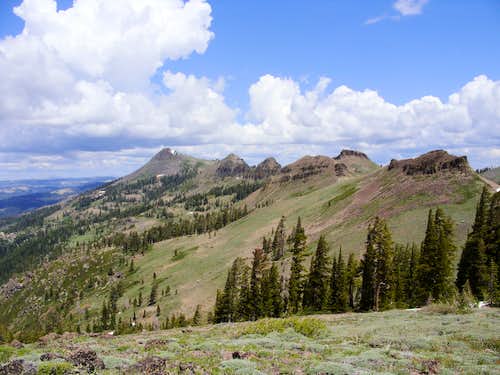 The ridge to Tinker Knob.

After taking in the views. I walked up to the summit of Peak 8506. After two years, I had finally returned and bagged the mountain that alluded me. I was quite satisfied. There are actually two summits to Entin Peak, almost the same height. However, I determined the one to the east with the prayer flags was the true summit. Still, I visited both summits. There was no register or USGS marker at either location.

With one summit in the bag, now there was only Silver Peak to go. It had been my intention to climb Silver Peak, and then return to Olympic Village via the Silver Peak south ridge. The route down Silver Peak involves only 2.5 miles of walking to get back to Olympic Village. The problem is that I misjudged the distance to Silver Peak, and the difficulty of the traverse. I knew down-climbing from Peak 8506 would be challenging. It wasn’t really too bad. It was just quite steep. I saw an enormous Marmot on the way down, jumping down to a boulder above me. I carefully plotted my steps on the way down, occasionally sitting on my butt to lower my center of gravity as I moved down the rocks. Peak 8506 shares a ridge with Silver Peak-West Peak 8426', a rocky summit block rising more than 350 feet above the ridge. I had no intention today of climbing up to Peak 8426. I would rather not do that alone, since it requires some difficult class 3 climbing. Rather, I climbed up about 175 feet to the top of the ridge just below Silver Peak-West Peak in order to traverse to Silver Peak. 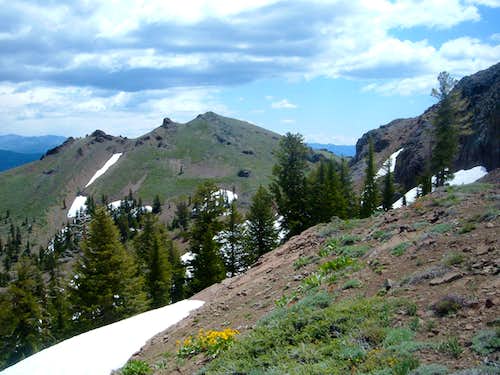 View of Silver Peak from the ridge below Peak 8426

The 175 feet wasn’t too difficult. However, when I got up to the top, I noticed a little problem. Much of the traverse had snow and the snow covered the most obvious crossing point. That meant I had to be creative to avoid dangerous snow slopes, while not down-climbing too far. I went to the edge of the snow and down-climbed about 50 feet. I crossed over some snow, going quickly and chopping my hands in to get leverage. Now on the other side, I went down slightly into the woods. However, to get to the next point, I had to cross more snow. Now I had to climb back up about 25 feet or so. So, I took a deep breath and headed up the precarious snow slope. I chopped my foot in the snow every step, and tried to move quickly to get to the other side. I didn’t want to slip down the snow. Exhilarated, I made it to the other side without much of a problem. Now the hard part was over. Except I did have to downclimb almost 250 feet before I could head back up to Silver Peak. This was more of a downclimb than I was expecting. However, I still felt pretty good, and knew that once I got to the top of Silver Peak, that I probably had less than one and a half hours back to my car. 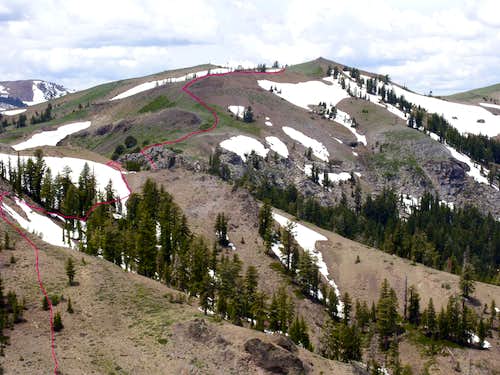 The approximate route I took for my traverse from Peak 8506 to Silver Peak.

Now at the bottom of the ridge, I was ready to hike up the final stretch to Silver Peak. 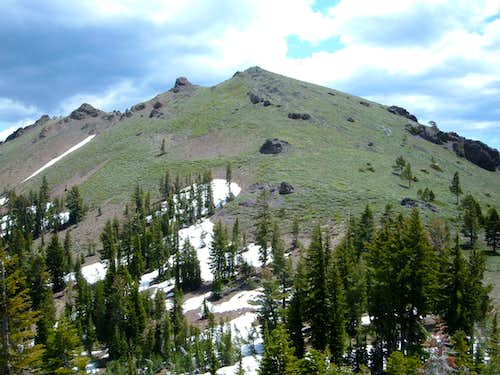 Final stretch up to Silver Peak.

I was getting a bit tired, but surprisingly the 350 feet up to the Silver Peak summit wasn’t too difficult. When I got to the summit, I got a big slug of water, and lay down. I felt pretty good for 5-10 minutes until the bugs started coming for me. I noticed that it appeared to be raining on Mount Rose in the distance. The clouds were rolling in and winds were picking up. The winds were much stronger than they had been on Peak 8506. I needed to get a move on. I had a small granola bar and sucked down some more water. I got up and started the steep downclimb. I knew that I had to be careful in my descent. The first part wasn’t too bad. However, I was tired, and I had to watch my step. After about 25 minutes I ran into some other hikers. They had just come up from Olympic Village and they informed me of what was to come. They told me that I had to follow the ridge all the way to its end where I would see a trail. 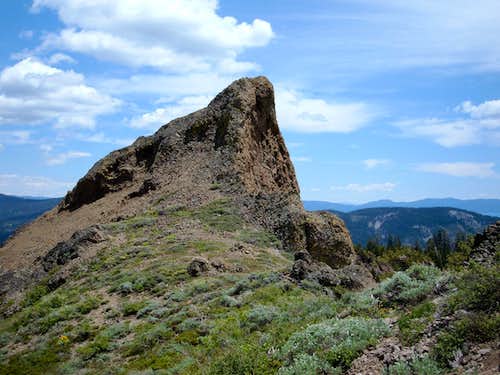 Rock spire on the way down Silver Peak.

I followed the ridge as best I could, occasionally running into some brush. I had to climb up to a final summit along the ridge. This summit is 7,742 feet. At the top I sat down and got some water. My eye caught the start of the trail! I was finally at a trail again after 3 ½ hours of hiking on uncertain slope! I lay down again, relaxing a bit before beginning my final descent. However, after a few minutes I noticed a small insect having sucking blood from my arm for its lunch. I realized it was time to go home.

The trail down Silver Peak from Point 7742 is very steep. I was able to follow the trail, yet I was certainly strained keeping balance down the trail. It is just so very steep. I couldn’t imagine how difficult it would be to go up. After about 20 minutes or so I made it to the end of the trail. Unfortunately, the trail ends around a bunch of houses sitting above Olympic Village. I still had almost one mile of roads to walk down to get back to my car. I got back to my car after almost five hours of hiking, covering about 7 1/2 miles (the last mile walking down paved roads).

Overall, it was a good day. The day started off perfectly clear and by early afternoon the winds picked up and clouds moved in. However, it never got too cold and it didn't rain or thunder. The beauty of this area cannot be understated. Despite the low elevation of these mountains, there is a lot of treeless open area, and there was still a lot of snow. The large rock cliffs and boulders make the area that much more spectacular. I bagged two mountains in one day, and left feeling satisfied. My fellow hikers, determined to summit Tinker Knob and Anderson Peak, would return to the parking lot almost seven hours after me.

Don't let yourself be fooled by that part of the ridge on the way to tinker knob. If you actually followed the crest you would end up above some massive sheer drops in more than one area. Silver looks fun, have to try it sometime