After descending through this valley two times, I decided to use it also for an ascent. But however careful I was, in the upper part the non-marked path disappeared. Even if I could follow cairns, I'm not sure that I chose the best option. And certainly it was not the one, which brought us down two times before. I came on the open screes more towards the west and not just below the vertical wall of Vežica. 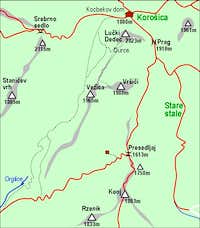 0. General: From cca 570 m to 2023 m, exposition S and W. Non-marked path, a short (20 m) climbing part, UIAA I-II. Gear: Good shoes, poles. It is recommended to continue the tour over the plateau on the summits of Vršiči and Vežica and return down by the marked path over Presedljaj. That's a very nice one-day tour through a remote and unspoiled area. The ascent over Šraj pesek requires good orientation. If you descend over Šraj pesek, you will probably miss the described ascent route, because in the upper part its start is not well seen and is away from the descent path below Vežica wall. In this case you will find yourself on top of steep, rocky gullies, where the use of rope and belaying is recommended to come down.

We follow the marked path through Kamniška Bela towards the NE. After some 20 minutes there's the first inscription on a red table, telling us, that the marked path on Presedljaj goes right up the hill. Here we leave the marked path and continue by a well beaten path towards the left, just above the creek bed. The path is broad till the short gorge of Kamniška Bela, the creek there forms a small waterfall, called Orglice (when enough water). Don't follow the path through Orglice gorge. It is probably used by sunday hikers, exploring the waterfall, and gets very steep and exposed in the upper part. 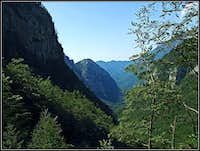 So, just befor Orglice (some 50 m) turn right and follow a path, which ascends the slope, keeping right of a gravel ravine (looking upwards). You go up just a few minutes, then the path turns left and crosses the ravine. There's a wooden log across the path, preventing sunday hikers to continue. On the other side of the ravine the path goes up by the ravine again and then starts climbing towards the left, over a steep, rocky step. But the path is fine, narrow but well chosen, so you overcome the rocky step without any problem. Above, the path continues upwards through the woods, until from the right a good hunters path comes horizontally. Now we go left across the slopes and soon descend into the creek bed (dry here) and cross it. The valley here, named Kamendol, is not steep. So we continue by the creek upwards, the path is good and well beaten. Some 100 meters higher it goes again across the creek bed, the passage is clearly marked with a cairn (because in the creek bed the path gets lost). We continue ascending, until the path gets steeper and reaches the rocky walls. Where a nice rocky channel comes down, we cross the ravine again and ascend over a very steep slope up to the left. The path is still good. Reaching a short grassy ridge we seem to meet a small crossroads, but the right path finishes after a few meters in a dark place among steep rocky walls. I saw no passage there. So, on the grassy ridge we go by a tiny path a few meters down, then cross the steep grassy slopes towards the right, and soon turn upwards again. This path is marked by ciarns again. It gets steeper and steeper, finally bringing us to a rock wall, where we need to climb a little. Rocks are grown with woods, which help us, but we shall still mainly use good holds in rocks to advance. The passage is exposed and steep, after some 20 meters we climb towards the right and exit. Difficulties don't exceed degree II. I read also, that over the rocky step we could make use of a few pegs (useful for descending), but I saw none there. 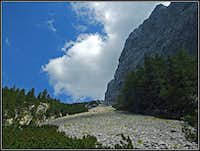 In the woods above the step the path, being tiny but reliable till here, strangely disappears. You ascend directly upwards, luckilly a few reliable ciarns still help you. Soon you see a steep and narrov channel, being cut through steep walls. You struggle upwards, gaining some 30 meters of altitude again. Above it's only a bit less steep and you again allways need to follow ciarns. The path gets lost completely, so it is possible that here somewhere you need to keep more right. The ciarns bring you up to a more open terrain, we already feel that we reached the lower end of the broad screes, called Šraj peski. Only a little struggle with dense bushes and out we are. The screes which we reached, are not those just below the west wall of Vezica. It is recommendable to go right, cross the forrested ridge between and finally reach the well used path below the vertical walls. It is here, where all the climbers descend to enter the climbing routes or continue down into the valley. Now we struggle hard up the soft screes. In many turns we make altitude. This gravel part of the route is actually the only 'aesthetic' weakness of our route. This route is so much better in a descent! Keeping just below the walls we ascend some 300 more meters, after which we reach the saddle between the walls on the right and a small bump, called Lepa glava, 1765 m, on the left. On the other side a more flat valley lies, finally broadening into the grassy Petkove njive meadow. 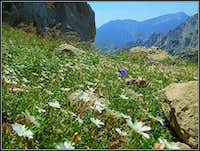 Now we start looking for a path which could bring us right on the slopes, ascending towards Durce pass. We already see the grassy summit of Dedec, the grassy passage right of it, so we only need to ascend it moderately, not just directly from the valley. Doing so, we reach the path, which comes from the other side, from Kocbekov dom, already high, just below the saddle. Only some 10 minutes more up, and we reach the grassy plateau above. Now we continue towards the left, where above the grassy and pine-bushy slopes we already see the summit of Lucki Dedec. We have now only some 100 meters to the top.