The smallest of the three US Virgin Islands, St John is also the least densely populated and least developed. To put it in a modern perspective, St John has no airport and not one golf course. More than half of the island’s acreage falls within Virgin Islands National Park, as well as more than 5,000 acres offshore. It is the island’s natural, unspoiled beauty that sets it apart from it’s larger brothers-St Thomas & St Croix.

The Virgin Islands are located at the western and northern most point of a chain of islands known as the Lesser Antilles that stretch from just north of Venezuela to Puerto Rico. This chain is divided into the Windward (from Grenada to Dominica) and Leeward Islands (from Guadeloupe to the Virgin Islands).

The Lesser Antilles and a portion of the Greater Antilles

St John is a heavily forested, mountainous piece of volcanic rock, rimmed with rocky coves and bays, which protect it’s pristine white sand beaches and coral reefs. With over 800 species of plants and 160 species of birds, the island is a naturalists wonderland. Many species of fish, sea turtles, lizards, iguanas and, the islands only native mammal-the bat, round out St Johns fauna. The wildlife picture wouldn’t be complete without mentioning the island’s introduced creatures; feral donkeys, whitetail deer, feral cats, tree rats and the mongoose. The mongoose was someone’s brilliant idea to rid the island of tree rats. As often happens with such introductions, somebody forgot to explain to the mongoose what they were supposed to eat. As luck would have it, the mongoose found lizards and sea turtle eggs much more to their liking.
Interestingly, there are not now, nor have there ever been, snakes on St John. 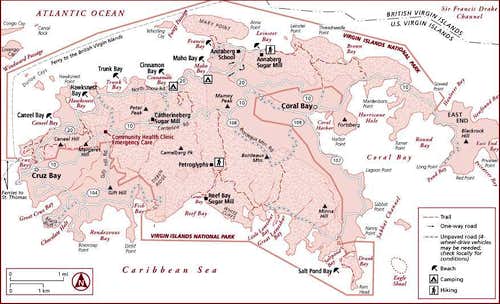 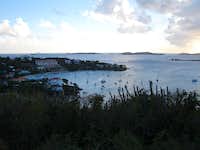 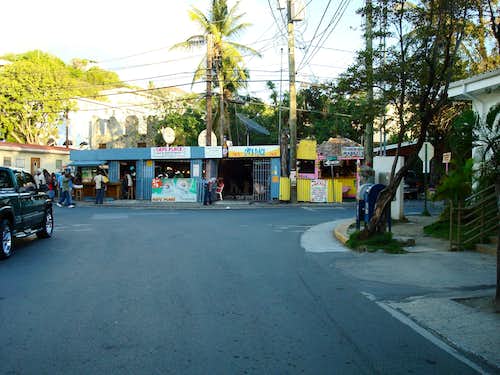 Cap's Place, Downtown Cruz Bay
The main town on the island is Cruz Bay, which is situated on the western end, just a few miles east of St Thomas. The only other settlement on the island is Coral Bay, located about five miles east of Cruz Bay. A couple paved, narrow, winding roads crisscross the island from west to east in the northern and central portion of the island. The southern portions of the island with a few exceptions, are most accessible by hiking, 4WD or boat. Taxis (full sized American pick-up trucks outfitted with special beds) are plentiful, though a little expensive. Rental cars and jeeps are also available.
One detail about driving which bears noting: All vehicles drive on the left side of the road in both the US and British Virgin Islands. 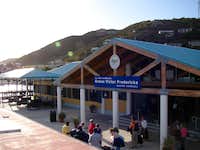 
Even today, St John remains far removed from our fast paced world. Most visitors to the island come on day trips from St Thomas, but those who enjoy the outdoors will want to spend more time exploring the island.
Virgin Islands National Park has 21 marked hiking trails that are accessible from the North Shore Rd (Route 20) or from Centerline Rd (Route 10). The hikes range from easy walks to more difficult climbs, though the difficulty is relative. The island’s highpoints, Mamey Peak (1,147ft), Camelberg (1,193ft) and Bordeaux Mtn (1,277ft) are for the most part short hikes from nearby roads.

St. John has no airport and the seaplane option is a memory, so the only way to get to the island is by boat. Most visitors fly into the St Thomas airport then travel by island taxi to either Charlotte Amalie (10-15 minutes) or Red Hook (30-45 minutes) to catch the ferry to St John. The Red Hook ferry takes 20 minutes to reach St John, the Charlotte Amalie-45 minutes. The ferry schedule is a little sketchy but it reads like this:
Beginning at 6:30am, ferrys depart from Red Hook, on St Thomas’s eastern tip, more or less every hour for Cruz Bay. The last scheduled ferry coming back leaves St John at 11pm.
Beginning at 7:15am and continuing every two hours, ferrys depart from the Charlotte Amalie waterfront for St John, with the last sailing at 5:30ish. The last boat from Cruz Bay to Charlotte Amalie leaves St John around 3:45.
One observation regarding the Red Hook versus Charlotte Amalie departure point. Red Hook involves a longer, more costly taxi ride to reach but it is infinitely less hectic and a shorter voyage than Charlotte option.
For more info on the ferry, call-340-776-6282. 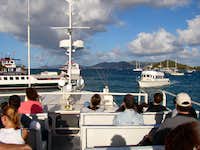 Prior to the arrival of Columbus, the Virgin Islands were inhabited by native American tribes that migrated up the Lesser Antilles from South America. The first “permanent” residents were the peaceful Arawak Indians, who occupied the islands for about 500 years. Around the 15th century, Carib Indians reached the islands and laid waste to the Arawak civilization. Eventually, all the native inhabitants were wiped out by European explorers and the diseases they brought.
In the 17th century, legendary pirates such as Captain Kidd, Blackbeard and Sir Francis Drake used the islands as a base for their plundering of treasure laden Spanish Galleons heading back to Spain from the New World. After brief stints by French, Dutch and English occupiers, the Danes took over St John in 1717. They started cultivating sugar, tobacco and cotton using one of the areas most abundant recourses-slave labor. In 1733 St John’s slaves, many of whom were of African tribal nobility and former slave owners themselves, rebelled. For six months they controlled the island before French troops from Martinique quelled the rebellion. Many slaves passed through the Virgin Islands before eventually ending up in the American South, with nearly a quarter of a million being sold on the auction blocks at St Thomas’s Charlotte Amalie. 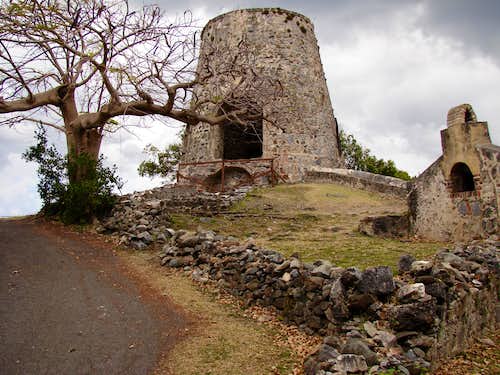 In 1917 the US purchased the islands for strategic reasons after two previous failed attempts, from Denmark for $25 million. In 1956, millionaire Laurance Rockefeller donated 5,000 acres of land on St John to the US federal government for a national park and Virgin Islands National Park was born. In 1962, 5,650 acres of submerged lands, off the island were added to the park.

St John is far removed from the glitz of St Thomas & St Croix in many ways. Accommodations are definitely limited. On the upscale resort side, Caneel Bay offers an old school approach while the Westin gives a more modern choice. Villas and condos actually offer more beds than do hotels on St John though they don’t come cheap. A few small hotels, B & B’s and Inns round out the options for “traditional” lodging on the island. Maho Bay and Concordia campgrounds offer lodging at a lower rate than most of the other accommodations on the island. Tent-cottages are the order of the day at these Eco-Camps and they are very popular. 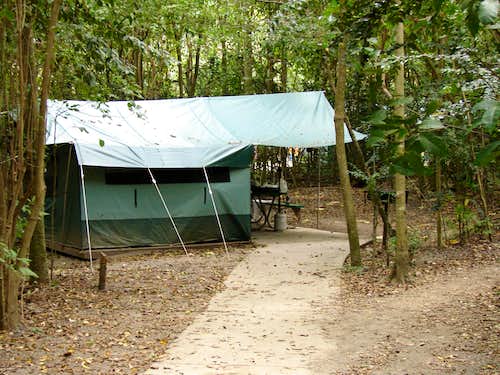 Cinnamon Bay rental tent
The down and dirty cheap is found at Virgin Islands National Park’s Cinnamon Bay Campground. Note that camping in the National Park is restricted to this campground. Choices range from bare campsite to tent to cottage. As of the 2007/2008 season, prices range from $27 to $140. If this is your option of choice, you need to book far in advance. Check the links below for details. 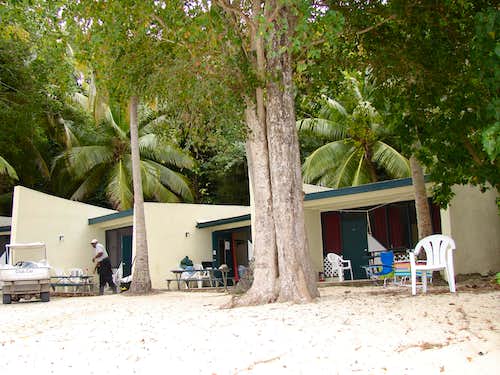 None to get to the island. It's a different story when it's time to leave. Travelers leaving St. Thomas are considered to be entering the US and therefore have to pass through Customs. It's kind of a gray area at this time but passports are the best ID.
The US dollar is the currency for the US and British Virgin Islands
As far as Virgin Islands National Park goes, no entry fee is charged (if you have a Parks Pass, it'll do you no good), but there are user fees charged to enter Trunk Bay and the Annaberg Sugar Mill. If you're planning on spending more than one or two days, it may be cheaper to buy a year pass than it is to buy several day passes. 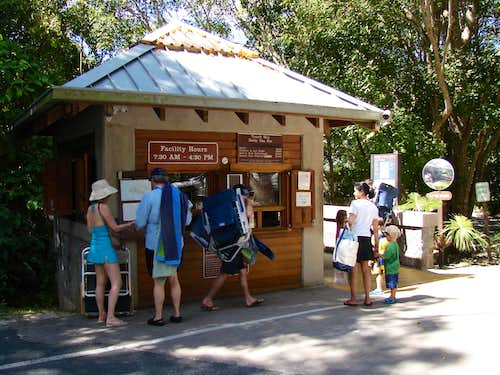 Hurricanes season runs from June to November. During that time, generally speaking- it's wetter, less crowded, less expensive and a little warmer. The temperature and hours of daylight don't vary a lot from season to season. Rainfall, however does. 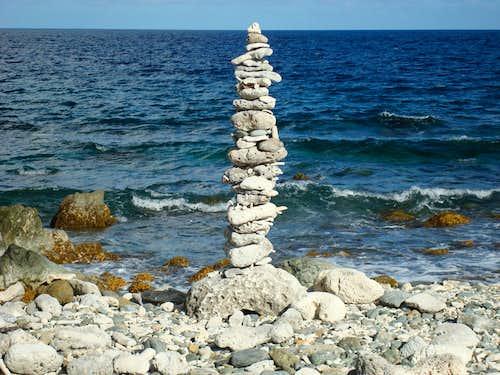