0. General. From Karl-Fuerst-Huette, 2629 m to 3088 m. Prevailing exposition: west and south. Till Rabenstein, 2902 m, good marked, then glacier route around Sonnblick's South ridge, finally scramble over the SE slope to the top (or easy climb – UIAA II/I) by the South ridge. In the morning the western slopes of glacier require care if the snow is hard. Gear: crampons, ice pick, rope.

3. Psyche. 4 – hard. Even if the tour is overall not hard, a few exposed details, loose rocks and the glacier crossing require attention.

4. Orientation. 2 – easy. Some attention on the glacier and when finding the SE summit ascent entry. 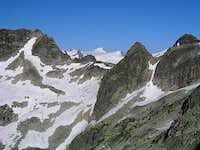 By the hut two paths continue in the eastern direction, towards Stubacher Sonnblick. We choose the upper (northern) path, behind the hut a big inscription on the rock ("Rudolfshuette") directs us on the route. Along the snowfield an explicit rocky ridge leads us towards the NE, at first it is very flat, later it gets much steeper. By this rib we advance searching best passages among boulders and loose rocks, good marks also help us finding them. Just before the main ridge of the whole Alps (Hohe Tauern here) the marks lead us towards the right and over a few steep passages (good rock) we reach the final, some 2 m high wall. This passage is also not protected, and we soon realise that there is also no reason for that. Good handholds in solid granite are better than all pegs, but pulling up requires quite some power (for an ordinate hiker). 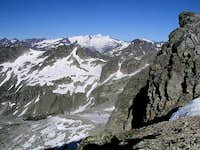 On the main ridge

On the main crest the whole northern horizon opens, Grossvenediger on the West was seen also before. Now we proceed by the northern slopes of the ridge towards the East. Also the next ridge summit – Rabenstein, 2902 m, is detoured – this time on the southern side. On the other side we descend a little and it looks as if the route wants to descend on the glacier, which we see already close below. But marks proceed by the rocks of the main ridge towards Sonnblick. Around the next vertical tower in the ridge the route finds a detour again on the right (southern) side and when coming around, we finally reach the glacier. Here we put on crampons and rope-up. 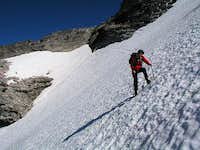 Keeping close to the rocks we ascend over the steep glacier, which is in the morning in shade and accordingly hard. This (some 80 m) is the trickiest part of the tour. Above, the glacier flattens considerably and in a south-eastern direction we cross it easilly to Granatscharte, 2970 m.

If we continue the ascent by the South ridge of Stubacher Sonnblick, we can touch its rocks just on the saddle, or also a bit later, on the Eastern side of the ridge. In any case we ascend to the rocks on top of the first part of the ridge, there it becomes narrow and requires easy climbing. Tis part of the ascent is also not marked, so we must seek passages ourselves. On the other side, on a short descent, a vertical step awaits us, the best advice is, to prepare on a narrow ledge one meter lower and simply jump down on a broad plate below. Climbing down would be also possible, but much harder. If you're not a »jumper« the detour right down would mean descending considerably, so finally you would find yourself on the South-East approach route. The rest of the ridge is simpler, but it still requires some more easy climbing (UIAA I. degree).

If not going by the South ridge, we go by the glacier right of it until we reach the South-East slope of Stubacher Sonnblick where this one is least steep. Also here we shall not see any marks nor ciarns, but a tiny path and good passages are easy to find. Over a steep slope we scramble up and lightly towards the right, allways looking the big cross on the summit.