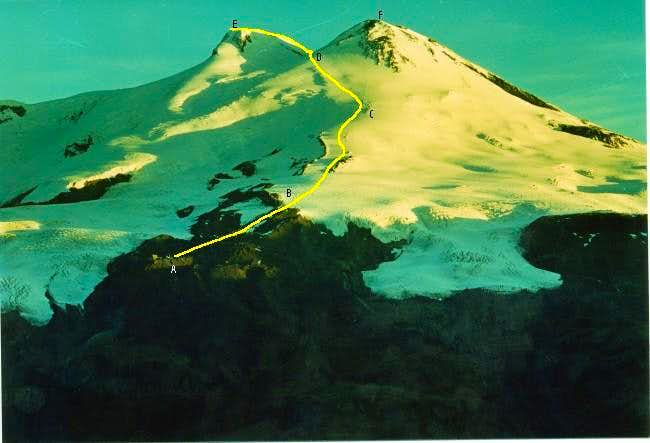 Photo taken by Pilgrim Tours in summer of 2003 and is used with permission. Route line and annotations were added by myself.

Now days, partially because of the red tape involved when climbing in Russia, most non-Russians will be going to Elbrus with a guided group. In that case, transportation is usually arranged before arriving in Moscow, at least if you are coming from overseas.

If you are traveling independent of a guide service, here are the directions:

Most people climbing Mount Elbrus will first arrive by plane or bus in either Mineralnye Vody or Nalchik. From either of those two locations, there are usually 4-8 buses a day headed for Terskol, but it is highly recommended that you make transportation arrangements ahead of time. This is usually easy to arrange.

From Terskol, arrange or walk the 5 kms (3 miles) up the valley and along the road to Azau at 2350 meters (7700 feet) elevation. This is where the first cable car station is, and you can’t miss it. From the cable car station, you can cheat and ride the cable cars up to the Barrels Huts (located at what is known as Garabashi Station), or you can walk. The final chairlift to the huts was closed on our visit in late September 2003, but is usually open. If it is closed you will have to walk.

From the Barrels Hut, head south and up the slopes to the Diesel Hut location at 4157 meters (13,638) feet elevation. The trail is usually well packed by snowcat and takes about an hour. From the Diesel Hut, continue south up the slopes while heading straight towards the East Peak. Make sure to stay on route (usually marked with wands) because the surrounding slopes are covered with huge crevasses. There are no crevasses of consequence as long as you stay on route. You will pass between two linear rock bands before the route becomes steeper and climbs to the Pashtuhova Rocks, located at 4670 meters (15,321 feet) elevation.

After the Pashtuhova Rocks, the route first heads south towards the East Peak, but after a short distance, it turns left and heads more in a westerly direction as it climbs up the slopes. The route reaches a gentle-sloped snow filled basin before climbing up to the saddle between the two peaks. There are ruins of an old hut at the saddle. From the shelter, head west and then head left towards the rocks of the shoulder of the West Peak. Cross the broad slope to the summit. Total elevation gain from the Barrels hut is 1743 meters (5718 feet), and the climb usually takes 6-9 hours up. Descent usually takes 3-6 hours.

WARNING: A common and sometimes fatal mistake that climbers make on the descent of the peak is to head low and down too early after the half-traverse below the saddle after returning from the summit. It is especially common when the weather is stormy with low visibility. On the descent, make sure to stay high up on the slopes of the east peak, rather than going down the slope too early after the saddle. If you descend too early, the route becomes very steep there and some nasty crevasses and falls have taken many lives there.

For those who have done Elbrus, the route up from the 17,700' saddle has changed a little. Used to switchback up into some light rock bands ("light" as they're mostly snow covered) and then straight up about 300' to the summit ridge. Now the route continues to traverse on a narrow, exposed snow path leaving a straight shot of only 150' or so to the summit ridge. -Steve Bonowski

An ice axe and crampons are always needed. In normal conditions a rope is not needed, but some groups still take one, as well as a harness. The route usually has wands along its entire length, but it wouldn't hurt to bring some along just in case. Full expedition clothing is required. Even though the mountain is easy in a technical sense, the weather can be extremely cold and stormy.