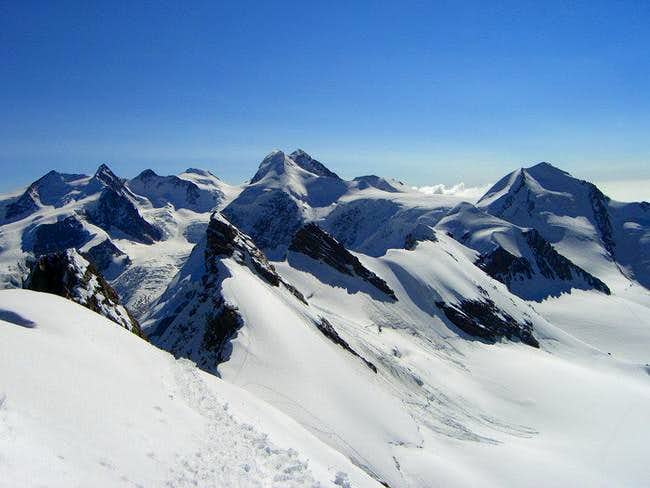 Standing on Middle Breithorn (4159m): In the front the two rocky "Breithorn-Twins" - The end of the ridge is "Roccia Nera" - After that is the small Pollux-Pyramid (4091m) - The big on the right is Castor( 4226m) - In the background near the clouds is Il Naso. The two big peaks in the middle are Lyskamm West (4480m (front)) and Lyskamm East (4527m(behind)) On the left side the four summits are from left to right: Nordend(4609m), Dufourspitze (4634m- second highest summit of the alps), Zumsteinspitze (4563m) and Signalkuppe (4556m). On Signalkuppe you can see on the highest left a black dot, this is the highest hut of Europe: Capanna Margherita - Behind Lyskamm is Parrotspitze (on the left you can see a little bit of the ridge to Parrotspitze from Signalkuppe) Compare this one from Breithorn west-summit.

Good job.. I always try to give a detailed caption as well, but I don't have as many mountains in my shots!!

I´m glad that you like them. Thank you very much. Cheers Sebastian