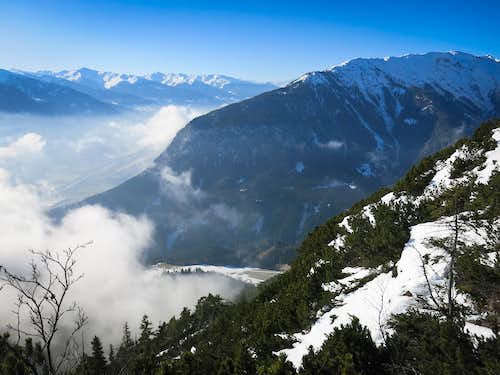 The Stanser Joch
Stanser Joch is in one view just a bump on a long, long ridge. There are several ways to the top. However, I think the mountain is special for the long east ridge coming up from Jenbach through lonely forest to pleasant uplands. Once on top, you'll want to continue west into higher Karwendel peaks. But should you need to return the way you came, there is no disappointment. The ~8 kilometer ridge journey is rewarding in both directions.

The mountain can be climbed from Jenbach, from Stans, from Pertisau or Maurach. I only have experience with the route from Jenbach. If someone has more detail for the other routes, I'll happily update the page.

In the center of town, follow streets north past the church, then turn left (west) on a side street that gets you to the foot of the ridge (about 650 m). A faint but nonetheless marked (red and white) trail climbs steeply up the ridge to a flat spot where power lines cross the trail (780 m), shortly followed by a wild animal feeding area which is marked as being closed after dark. At this point the ridge begins climbing steeply, the trail heavily strewn with old leaves. At one point, there is a "via ferrata" cable on the trail to assist getting over some steeper rocks, though forest remains deep. A minor summit called the Brandkögerl is noted on a sign as being 1 minute distant (I didn't bother :)). 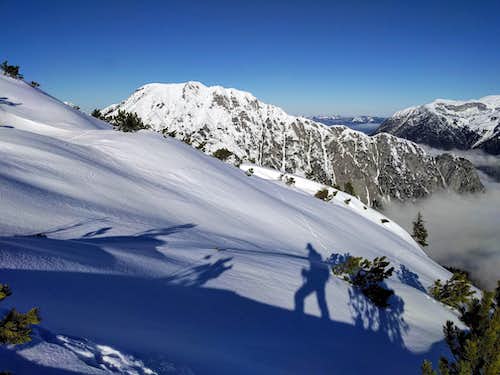 Pleasant ridge walking
At around 1500 meters, the Jöchlalm is reached, which has a small warming hut. The ridge becomes more open, and the next 300 meters of elevation gain are especially pleasant, alternating between trees and steep grassy hillocks. Finally, at about 1900 meters the country opens up and the distant summit is visible -- a cross on the ridge crest above a cluster of avalanche fences protecting Stans from ruin. Built over a 5 year period from 1986 to 1991, they ensure against a repeat of the 1689 tragedy that left 24 dead [source: Wikipedia (German)]. The summit at 2102 meters is easily reached by following the ridge. Fantastic views abound, north to the Achensee, west into the Karwendel, and south to the Inn, possibly shrouded in cloud far below. Beyond that the Zillertal Mountains. Plenty of room here for a picnic.

A mix of forest road and trail can be followed directly north from town to the summit. The climb is likely to be unpleasant on a hot summer day!

Due south from the little village on the Achensee, trail climbs to the Rodelhütte Pertisau. Skirt the Zwölferkopf via trail on it's left side and make for the Bärenbaldalm at about 1450 meters. Traverse the west side of the Bärenkopf on trail to the Weißenbachsattel at 1686 meters. From here, trail climbs directly up the north slope through occasional avalanche fences to the summit of the Stanser Joch (2102 m).

Head southwest out of town on road into the Weißenbach valley. Pass the Weißenbachalm (1606 m, possible refreshments available) to reach the Weißenbachsattel, from which the summit is easily reached just as the route from Pertisau.

I would say, all year! Snowshoes are helpful in winter. 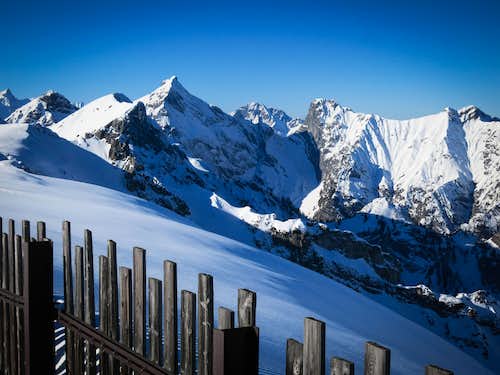