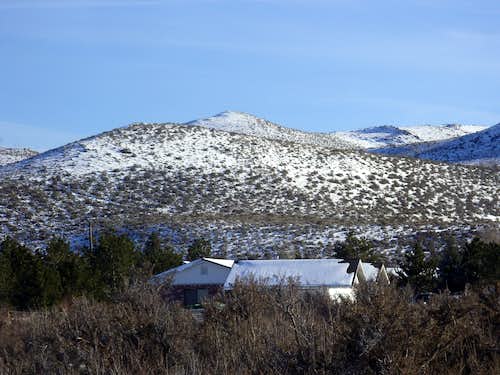 Situated east of the Mount Rose Wilderness, the Steamboat Hills rise to the south of Reno, Nevada. Easily accessible, it takes less than 45 minutes to reach the summit of these two hills from the two primary starting points. The north summit and south summit sit along a ½ mile long ridge, and offer spectacular views of the surrounding mountain ranges, including the Virginia Range, the Pah Rah Range, and the Pine Nut Mountains to the east, with the Sierra Nevada to the west. More specifically, there are great views of Freel Peak 10,881’, Snow Valley Peak 9,214’, and Mount Rose 10776’ and other peaks in the Mount Rose Wilderness. Outside of these mountain ranges, one can see Tule Peak 8723’ to the north (which is west of Pyramid Lake). Peavine Peak 8266’ stands out prominently to the northwest.

The Steamboat Hills rise independently of all these mountain ranges, which is why the views are so all encompassing.

The Steamboat Hills are so named because they are home to one of the largest thermal anomalies in Nevada. Steam vents out of several areas on the east side of the hills. A series of geothermal power plants on the eastern slope of the hills produce an average 75 MW for Northern Nevada communities. Ironically, however, the top of these hills generally retain more snow than even the higher mountains to the east in the Virginia Range. That is because despite the presence of this massive thermal anomaly, hot ground does not extend to the west side of the hills, where the main hiking route resides, and this area is closer to the Sierra Nevada, and gets more of its weather. 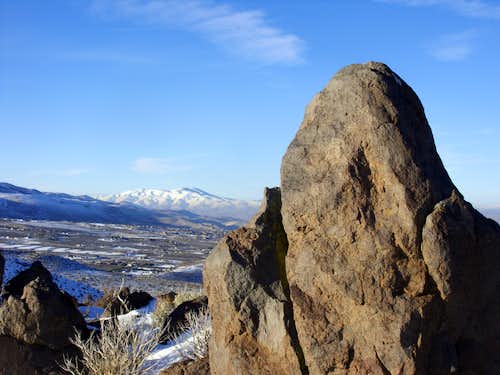 View to Peavine Peak 8266' from the summit ridge.

Access to the Steamboat Hills is from the edge of two residential areas providing entry to public land. Jeep roads heads to the base of the summit ridge.

The Steamboat Hills are best hiked in late fall, winter, and early spring. As mentioned above, there can be plenty of snow, so try to avoid hiking after a big snowstorm. During the summer, rattlesnakes may be present on the rocky areas and mud can be a problem during late spring. It is advisable to hike only after the noon hour. The reason is because the sun shines on the brown hills providing better views and better visibility.

There are two starting points:  The northern trailhead at Fawn Lane and the western trailhead in Callahan Ranch.

To get to the northern trailhead, take 580 South to the Mount Rose Highway (Rt. 431). Head west towards the Sierra Nevada, Lake Tahoe, and the ski slopes. Follow the road for 3 ½ miles until you see a sign that shows Fawn Lane on the left. There is no stoplight.

Take a left on Fawn Lane and follow for a mile to the end where there is dirt road and enough space to park.

To get to the western trailhead, pass the turnoff on to Fawn Lane on Mount Rose Highway and continue another 1/2 mile to Callahan Ranch Road.  Take a left onto Callahan Ranch Road, and descend the road for just over a mile and take a left on Goldenrod.  Continue for another 1/4 mile and take a right on Cherrywood Drive, then take your first left onto Shawna Lane.  Drive to the end of the road and park at the base of the hills.


For the northern trailhead, follow the jeep road as it climbs uphill. The road continues to gain elevation until it starts a descent at the north end of the summit ridge. From here, it is a ¼ mile walk up the final 300’ to the north summit. The north summit is the true summit at 6178’. However, the south summit (1/4 mile away) has slightly different views, and is worth checking out. It is only about 1’ lower than the north summit.

Both summits can be reached by hiking about 3 miles round trip and gaining a little over 750’ on the way up. 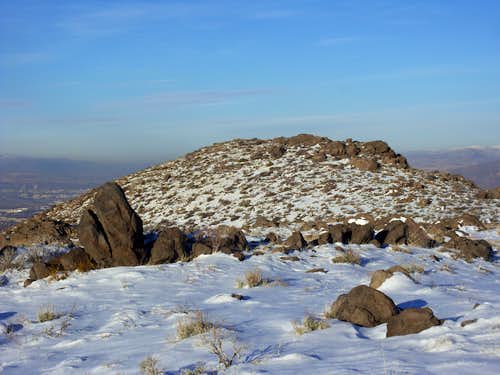 For the western trailhead, there is a dirt road going into the hills.  Take the road, but then take an immediate right on another dirt road that runs adjacent to Patti Lane.  Patti Lane is a private road, so it is not advised to use that road for primary access. 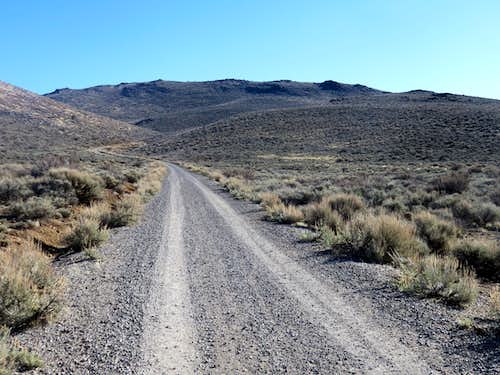 View of the Steamboat Hills summit ridge from the west side

You will eventually reach a well-graded dirt road heading up into the hills.  Towards the end of the road there is a water tank.  Then two crude dirt roads heading up the hills.  Take the road on the right which heads up to a ridge below the main summit ridge.  Once the road curves back to the north, head straight up to the ridge, which is over 200' above you.  Once on the main ridge, climb up to the false south summit.  Once there, you will see the true south summit.  Once there, you can continue on to the true north summit.

You can descend the way you came, or head back to the northern trailhead.  Once there, turn left back into the Callahan Ranch neighborhoods, but before entering the neighborhood, stay on a dirt road heading south.  A trail on the left skirts back into the hills and avoids getting on private property, and then you can head back to the parking area at the end of Shawna Lane.

If hiking out and back from the western trailhead, it is about 1 3/4 miles to the north summit by going over the south summit, gaining about 850'.  You'd want to descend back to the road on the right side of the summit ridge from the north summit, to take the road down that goes back to the water tank.  That makes for a total round trip of a little over 3 1/2 miles.

There is no red tape if approaching from either entrance to federal land. Be cautious of target shooters and make them aware of your presence. Stay away from the electrical equipment to the east, as that is part of the Steamboat Geothermal power plant complex.