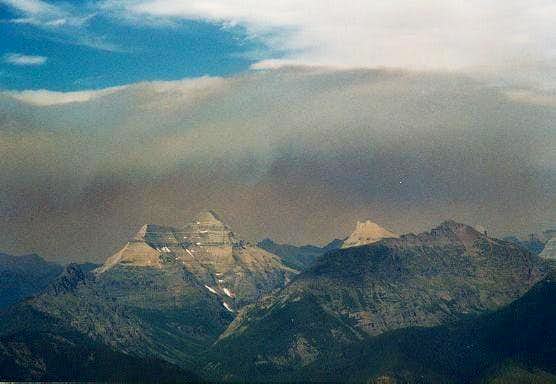 Not a heartbreakingly beautiful photo, I admit, but this is Mt. Stimson in Glacier National Park as seen from Great Northern Mountain's summit (Great Bear Wilderness; Flathead Range, MT), and the "clouds" and haze are smoke from the fires of 2003-- less than a week old at this time (7/24/2003). This is a reposting of an earlier photo. The original was a scan of a film print done on a cheap scanner, and the result was quite grainy. Some people asked me to resubmit the picture at a higher resolution now that I have a much better scanner, but I no longer have the print, and I would have to take the negative in and get it developed just to scan and post one picture-- a lot of hassle. Instead, I copied the picture and adjusted the contrast slightly, something I rarely do as I generally strongly disapprove of "post-processing" beyond cropping, to make the peaks stand out a little more. Maybe one of these days I'll reprint and scan the original.
« PREV NEXT »