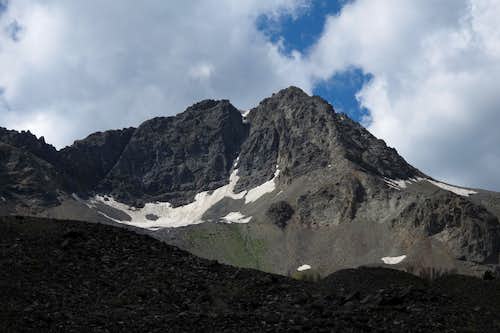 Stinkingwater Peak
One might pass on climbing this peak due to the name, but said one would really be missing out on a fine, challenging, and underappreciated summit. Better for the rest of us, I guess.
Way back, legendary mountain man John Colter dubbed what is now called the Shoshone River the "Stinking Water" because of the sulphurous gases emanating from hot springs and other geothermal features along the river. Eventually, Wyoming officials opted for a different name, perhaps in the interests of not discouraging tourism, but the name lives on with Stinkingwater Peak, and snowmelt and runoff on the mountain's western side actually do feed the headwaters of the North Fork Shoshone River, better known as the river that accompanies drivers for much of the trip between Cody and Yellowstone. The peak, though, and the headwaters, rise far from any paved roads, and climbing the peak delivers a wilderness experience.
Stinkingwater Peak and its higher, ridge-connected cousin, Sunlight Peak, are both easily recognizable from the east along the Chief Joseph Byway near and from Dead Indian Pass and from many points along the road into Sunlight Basin. Just look for the two high peaks that always have snow at their bases. Those snows are actually what remains of small, dying glaciers. (Read on.) 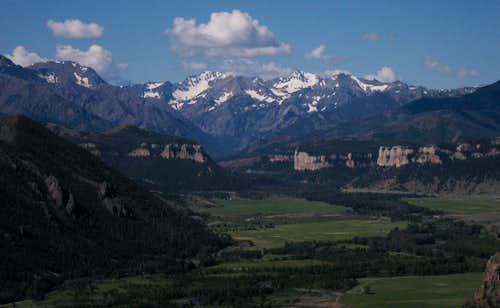 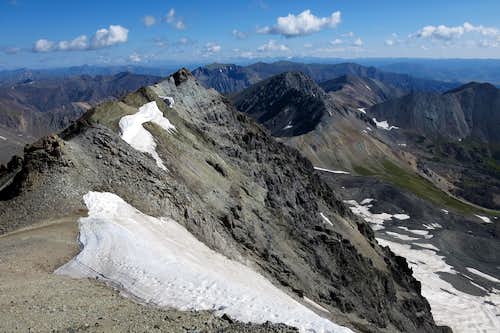 Sunlight Peak False Summit and Stinkingwater Peak
Unlike several other Greater Yellowstone ranges (Madisons, Winds, Tetons, Beartooths, Montana Absarokas), the Wyoming Absarokas are not a heavily glaciated range (really not much at all), but they actually do have a few small (and dying) glaciers. Stinkingwater Peak has one such glacier; it is, as most Greater Yellowstone glaciers are, on the east side of the mountain, and it is between the peak and the highest Copper Lake. On maps, it does not have a name, but I call it Stinkingwater Glacier, though it might make more sense to call it Copper Glacier or Fall Glacier since it feeds the Copper Lakes and Fall Creek and since the nearby glacier below Sunlight Peak is named for the creek it feeds, not for the peak it nestles against. 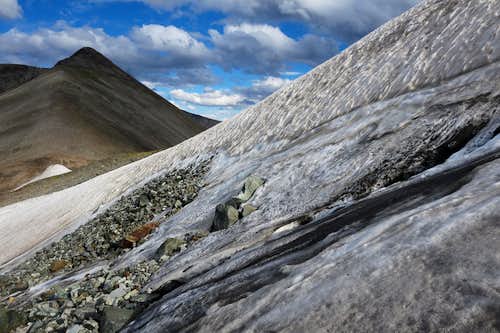 If you're solid on exposed, unprotected Class 4/5 rock in the mountains, then the crux might be the approach.
Approach 1: From WY 296 turn onto the signed road following Sunlight Creek into Sunlight Basin. This road is between Dead Indian Pass and Sunlight Bridge and is actually just before Sunlight Bridge if one is approaching from Dead Indian Pass, and just after it if one is approaching from the Beartooth Highway.

Drive about 20 miles, past where state maintenance ends and the road gets narrower and rougher, to an unbridged crossing of Sunlight Creek. Shortly before this spot, there is a turnoff on the left side.

If the water is low enough and if you have high clearance, drive down, cross the water, and go as far as you can and then park without blocking the road.
If the water is not low or if you do not have high clearance, park in an obvious turnout area just up the road.
Now, if you have real 4wd and high clearance and are up for some rugged driving, cross the creek and keep heading up the main road as far as you dare. It really is not too bad, but up high, it gets very narrow, steep, and rocky, with few options for turning around  or pulling off easily. But if you and your vehicle are up to it, you can drive to within just yards of the logical place to camp, a meadow beneath the steep slopes leading up the the basin below Sunlight Peak; this point is about where the 4wd track makes a pronounced turn to the north and begins climbing steeply, almost parallel to the south ridge of Stinkingwater Peak. An added bonus is that you can store food in the car; the closest trees are a hassle to get to.
Driving the road can save up to 5 miles and 2000' of elevation gain. 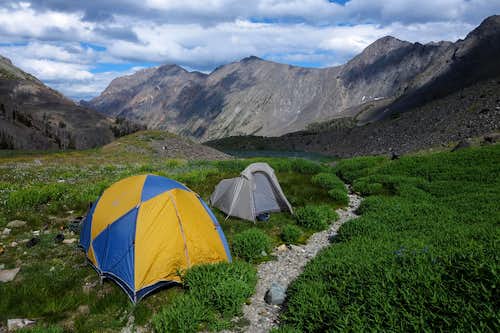 A Great Campsite
Approach 2: Theoretically, one can drive all the way up into Sunlight Basin proper and then hike to the Copper Lakes, and this would make for a shorter and more direct approach to the peak. However, I have never seen Sunlight Creek low enough at the ford for a vehicle to cross. That said, I imagine it has been done.

The easiest route up the peak is probably a Class 2 or 3 one using steep slopes above the Copper Lakes and then the northwest ridge. Life did not put me in a position to climb the peak that way, and I have two other routes to offer here. Neither is easy.

These route descriptions are based on the assumption that you have hiked or driven to the aforementioned camping spot.

Both routes are about two miles one-way and have about 2200' of elevation gain. The first will actually have a bit more than that due to ups and downs.

1: South Ridge-- This is how I climbed the peak. From the notch that is essential to the NE ridge route in Sunlight, I descended a couple hundred feet or so and then traversed over to the saddle between the two peaks. If one only wants to climb Stinkingwater, he or she could reach this saddle from the basin below via steep, loose talus. 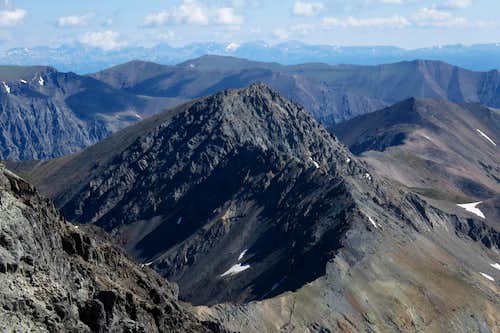 Now work the ridge. The closer you get to Stinkingwater Peak, the tougher the ridge gets. For me, the crux was the notch between the ridge and the peak itself; I had to do a precarious downclimb into the notch, drop a bit, and then climb the wall until I got to better holds and easier ground. From there, it was little trouble scrambling to the false summit and then an easy walk to the true summit. 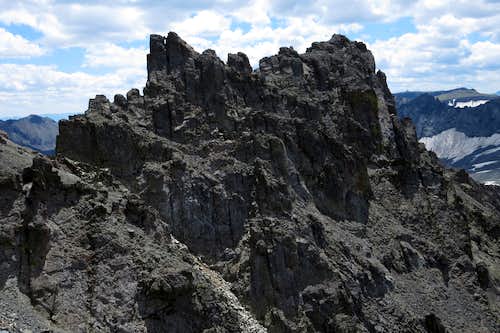 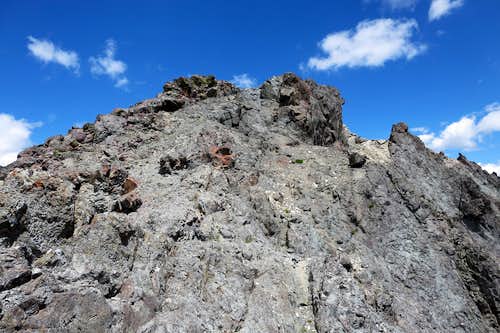 South Ridge of Stinkingwater Peak-- to the False Summit 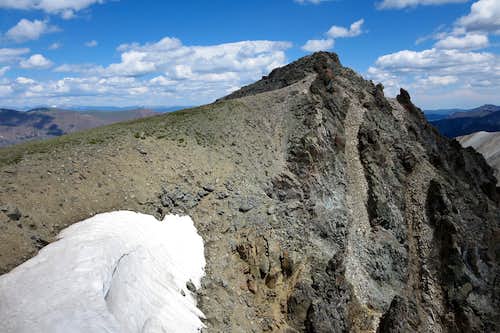 I would put this traverse at Class 4/5. The rock is pretty solid here for the Absarokas, but I would still skip the gear and only do this route if you're okay scrambling this grade on untrustworthy rock. 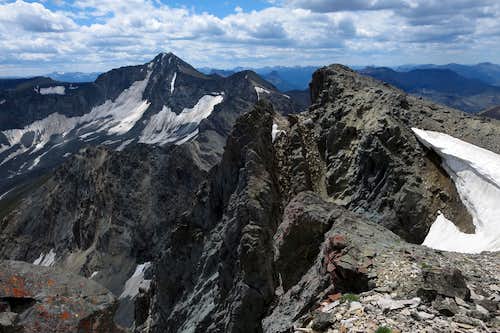 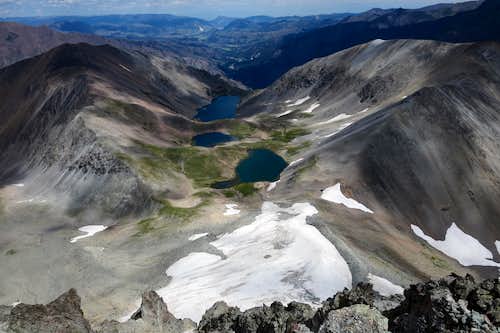 2: East Face-- This was my descent route, but I will try to describe it as an ascent route. Actually, going up this way would probably be easier than going down it, as it is steep and loose and frequently cliffs out.

Follow the 4wd track until it disappears a few hundred vertical feet below the pass that connects the drainages of the Copper Lakes and Sulphur Creek. Ascend snow and/or talus, or use/game trails if they are visible, to the pass, where there is a view including the glacier, Stinkingwater Peak, and the highest Copper Lake. You may also find a pretty tarn up there. Note to those after ranked peaks: the unnamed peak rising to the east is a ranked peak and appears to be an easy walk-up.

Work your way up the east face to the summit. It is not necessary to cross the glacier, but if you do, have crampons and an axe.

The route up the east face could probably be kept at Class 3 with care, but do it expecting Class 4. And remember that it is loose. 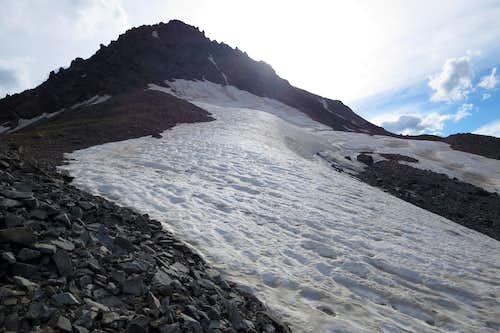 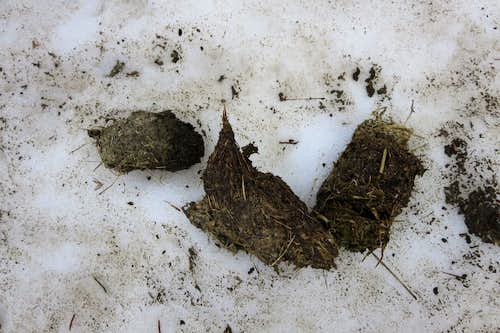 Don't forget about the bears! 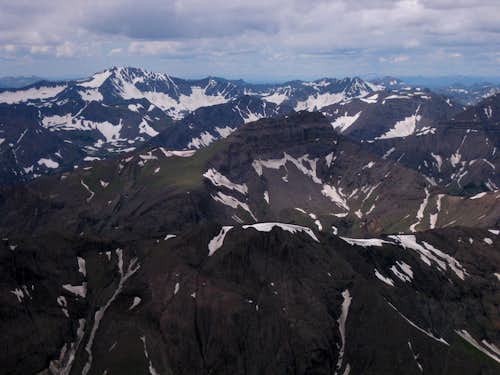