Stol from the S by Zabreska pot
Slovenia, Europe

Stol from the S by Zabreska pot 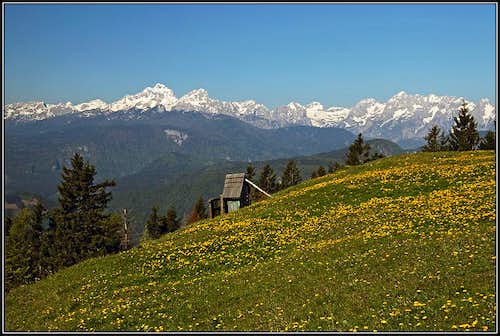 On the southern terrace of Stol

On Stol/Hochstuhl, from the south more or less two major paths are ascending. As almost everybody parks at Valvasorjev dom (hut) the western route (Žirovniška pot) is the more direct one. The eastern one, the here described Zabreška pot is some 30 minutes longer and respectively less steep. Due to direct south exposure it is not often used as a ski tour route (as the western one). If you attempt a round tour, the eastern route can be appropriate either for an ascent or descent. As the western one, also the eastern route is very panoramic and rewarding. The path is broad, as historically it was used to bring with horses materials on the mountain when Prešernova koča (hut) was built.

The trailhead is the parking place at Valvasorjeva koča (hut), 1171 m. See the main page of Stol/Hochstuhl how to get there from Žirovnica!

From Valvasorjeva koča (hut) you start walking mostly horizontally towards the east and even south-east. The inscriptions direct you towards the summit of Stol, because both, the western and the eastern route go jointly here. But already after less than 10 minutes the broad marked path reaches Žirovniška planina, where the direct western route deters left up. We continue towards the SE, all the time horizontally crossing the slopes of Stol. We reach the second alpine meadow - Zabreška planina - in some 30 minutes from the parking place.

At the hut we go by a weaker mountain road up the slopes. The cart-road leads us up and to the right, in the eastern direction. We reach upper meadows of Zabreška planina and only above, by a good water source the marked path starts winding up the forrested slopes. In several turns the path goes comfortably up through the woods, but still keeps towards the right.

On some 1600 m the path reaches Betonska bajta ("Concrete hut") which is locked (2011). From there the path continues in turns upwards and soon starts to get out of the woods. Soon bushes and grass land prevails, the slopes start to get also rocky on some places.

We ascend in switchbacks and a bit towards the right, then we pass Finžgarjeve skale (rocks) and soon after reach a small plateau-like shoulder on the SE ridge of Mali Stol. The big Prešernova koca (hut) on top of it is clearly seen above, but to reach it, we still have some 30 minutes of ascent. The path turns left and in comfortable switchbacks ascends up to the hut, 2193 m.

From Prešernova koča the main summit can be reached in less than 15 minutes. We shortly descend on the nearby shallow saddle and then cross the slope of the main summit left towards the summit rocks.

Descent. If you have your car at Valvasorjev dom (hut) you can quickest descend there by the direct (Žirovniška) route. So you do a nice half-day round tour. Other options are a bit longer. It is very nice, but recommendable to continue towards the west by the main ridge. The direct descent is first steep and a bit unpleasant (crumbly), then the path is good and traverses almost horizontally. Only in a few places it gets more narrow. So we reach below Potoski Stol on Vajneževo sedlo (saddle) and continue below the summit of Vajnež and down towards Potoška planina (meadow). Before reaching it - on the lowest part of those meadows, you will find a small hut (an allways opened shelter). There the path (unmarked - turn left) goes directly down on Potoška planina. For this path see also on the main page of Stol the description of ascent on Vajnež - in the opposite direction. From Potoška planina you have another 30 minutes to the parking place at Valvasorjev dom.