This "strada" is a historic "via ferrata". The ledge called "Cengia della Salvezza" during the WWI was used as a fast and efficient connection between the  Forcella Giralba and the Passo della Sentinella. It was decided to build this road, because the Italian troops could not penetrate into Austrian territor from the South side.

The "Strada degli Alpini" was made practicable by the italian soldiers, led by major "Italo Lunelli", on the west side of the Zsigmondy ridge, carved in the rock over long distances by force of arms, the ledge served to reach and fortify positions on the crest of Cima Undici during the preparation of the attack to the "passo della Sentinella, which marked at that time the Italian-Austrian border. In august and september 1915 there were the first vague attempts to take the step, but all failed.

The large terrace west of Cima Undici was only partially occupied by the italians who placed fortified positions and barracks from which pushed upwards. The last part of the terrace, one to the north, was under fire of the austrians who had settled "forcella Undici" where stubbornly resisted even after taking the next step in the "passo ella Sentinella" and the nearby "Torre del Dito".

The route was converted into a trail for experienced hikers since the 30's, and it's not particularly difficult, if approached in the middle of summer, no snow and with the necessary climbing equipment. While the original route ran down from the "forcella Undici", the stretch that leads to this step of the "passo della Sentinella" has instead been equipped by the CAI section of Padova in the 70's.

The route from refuge Comici

The route starts from "Forcella Giralba" 2431m and finish to the "Passo della Sentinella" 2717m in both directions.

Here will be explained the route from south, starting from the refuge Comici, which is the most commonly climbed: 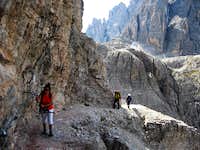 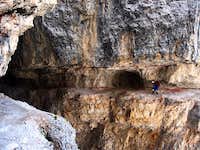 From the hut, taking one of the many trails that cross the wide debris basin in the direction of "Croda dei Toni", whith a large track n. 101/103 (Alta Via n. 5) which cuts to the left the huge scree, with moderate but steady climb, goes to the wide saddle of "forcella Giralba".

Avoid the notch and reach a rocky hollow where lies a picturesque lake frozen until late summer, 2326m and, where off to the left towards the "Strada degli Alpini" (30 min from the refuge).

From here take the path n. 101, which runs through the bumps of debris basin and up the other side. At this point, deserves turn left along a barely perceptible trace of war (cairns) that goes up the spectacular ridge called "La Lista". 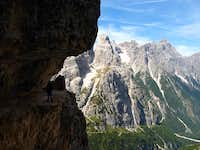 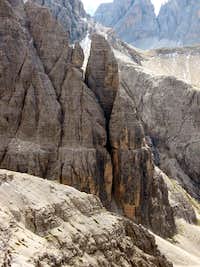 Returning once again to the path n. 101, past a limestone crag, and crossed a hill, you go down to the wide valley detrital rocks of the "Busa di Dentro" (junction to Monte Popera).

Crossed the brook, which falls just below a series of long and vertical waterfalls, climb up a scree and take the easy "Cengia della Salvezza", which dramatically cuts the vertical wall of the "Spada" 2526m.

Circumvented the edge, always along ledges aerial but easy, thanks also to the metal cable. At this point, the ledge tapers and falls significantly enough to force to move on all fours; than you enter an impressive and gloomy throat, which crosses at the ice slope that forms the bottom (be careful in case of ice). 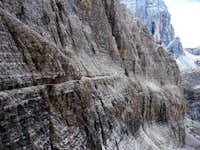 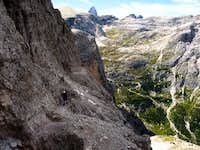 Beyond the gorge, the ledge is again wide and easy, although it requires more attention, until it crosses the bottom also called the "Busa di Fuori".

After the following passage, still wanders around the base for easy ledges of the "Torre Undici", beyond which takes to the wide terrace that wraps around the western flank of "Cima Undici", wherefrom appear interesting remnants of war (walls, trenches, barracks).

With long path a bit boring, even if it is worthy for the breathtaking views of "Cima Una", "Croda dei Toni", and "Tre Scarperi", it runs along the terrace (attention to plaque residual snow, generally still evident marks) until the edge of the north side, called "Forcella Undici" 2600m, wherefrom there is a view of the "Vallon della Sentinella" and the homonymous pass 2717m.

From here, if you wish, you can reach the "Passo della Sentinella" along the last stretch of the "Strada degli Alpini" (warning with snow!)

Going down instead of to the left, past an overhang of rock (fixed ropes, perhaps the most entire air path, but it's easy), and between obvious vestiges of the war, you will reach another gravelled fork (probably, in spite of the signs, the true Forcella Undici). 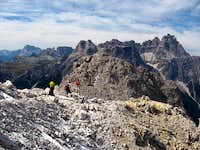 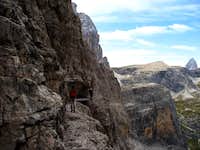 The descent of the wide scree gully to the right is easy but delicate due to the extreme friability of the gravel; further down the track greatly improves and you can safely reach the bottom of the debris of the "Vallon della Sentinella", with beautiful views of the homonymous pass.
Through the circus, go down the cliffs bordering the "Costoni di Croda Rossa" and overlooked a crossroads for Rotwandwiesen (path n. 100), continue to descend to the picturesque grassy basin "Alpe Anderta" 1958m.

Even a short descent then at another fork, leave the path directly to the hut and take the valley road to the right, the n. 124 for "Campo Fiscalino".

Into the woods, cut the long steep slopes descending from the "Costoni", cross a wide gravel channel, and then falls firmly in the beautiful shady forest (long wooden staircases) to the asphalt short distance from the car park of Campo Fiscalino.