Stretching Your Imagination To The Max? 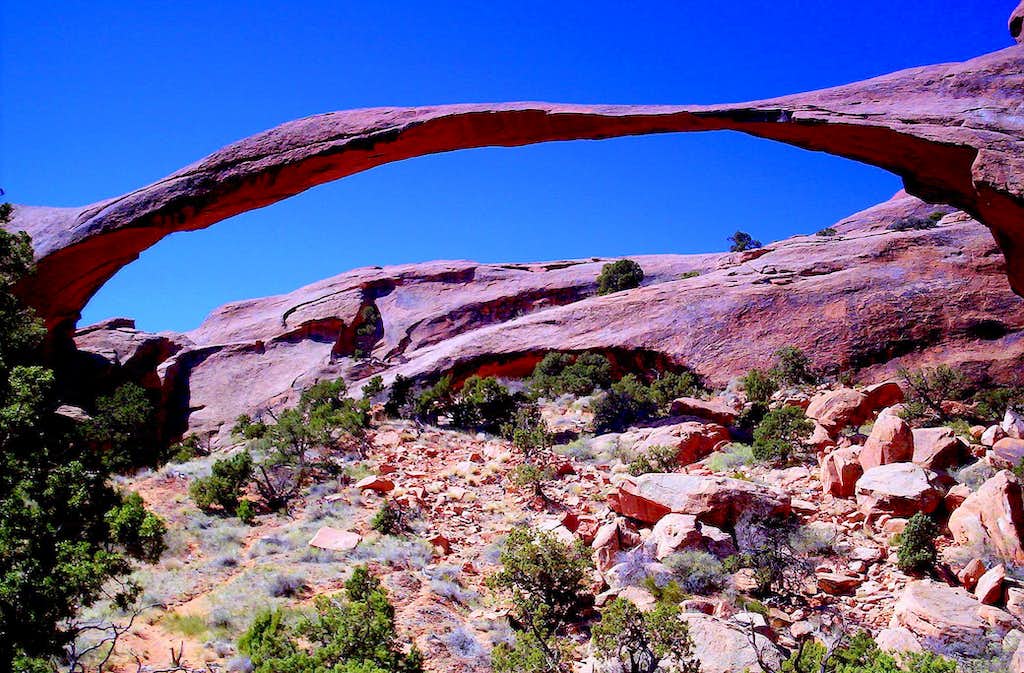 Stretching your imagination, indeed !!! My wife and I gasped at the sight of this sandstone spectacle !!! Landscape Arch, as seen in the Devils Garden section of UT's Arches National Park : Landscape Arch is a arc natural arch eroded in Entrada sandstone. Arc natural arches are considered OLD and near the end of their life-cycle. It's hard to believe that a piece of rock like this can exist. In its thinnest section the arch is only 6 feet thick, yet it supports a span of rock 290 feet long. (Indeed, this arch could collapse at any time; any day, any year, any decade OR any century. On Sept. 1, 1991, a 73-foot slab (180 tons of rock) fell out from underneath the thinnest section of the span. This was captured on video by a Swiss tourist who happened to be behind the arch at the time. On the sound track of the video, another hiker can be heard saying, "****, I don't think I wanna walk back under there!" The rock that fell was probably not structurally important to the arch. In fact, by reducing the weight of suspended rock, the arch was probably strengthened. On June 5, 1995, a 47-foot mass of rock fell from the front of the thinnest section of the arch, followed by another 30-foot rock fall on June 21. Due to these events the NPS has closed the loop trail that once led people beneath the arch. The Devils Garden area of Arches NP contains the largest concentration of significant natural arches anywhere in the world. [If you continue the hike past Landscape Arch to Double O Arch, a total of five miles round trip, and if you follow the signs on several side trails, you will visit a total of seven arches - Tunnel, Pine Tree, Landscape, Wall (since has collapsed), Partition, Navajo, and Double O]. Source: Natural Arch And Bridge Society (Photo taken by my wife on the morning of April 27, 2009) Talk about a "mind-bending" span of rock! For all you "list people," here's a list put out by the Natural Arch and Bridge Society (NABS), showing the world's longest natural arches.
« PREV NEXT »

Why don't we have such things on this side of the pond!

An artisan or crafts person from that side
of the pond could "reconstruct" this formation inside their heads, and let their
creative skills bring out an object that
represents what Nature has invented.

On the other hand, why don't we all go to
Paris for some wine and cheese ???

I did like this one the best. Was really bummed when Landscape came down recently.

You're from the greatest city in the world?
That has to be New York !!!

Please rest assured, this one is still standing. From my understanding, the one
that recently collasped was Wall Arch.

I don't know; it's really hard to keep track
of all those Arches.

I'm still trying to remember what I had for
lunch two hours ago. Have a great one, John!

(Sounds like you need to come to Utah more
often, to keep track of which arches are
standing and which ones have gone belly up!)