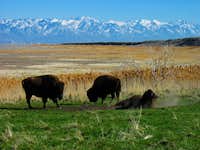 Stringham Peak, located on the northern part of Antelope Island is a 6,734 foot peak about a half mile north of Frary Peak. It is a non-technical 7.0 mile (round trip) hike that follows Frary Peak trail. It is easily seen from the highway as the bump on the ridgeline north of Frary. It is usually bagged in conjunction with Frary Peak but is a good standalone objective during snowshoe weather when the final climb up Frary would be icy and/or dangerous. The views, like every other high point on Antelope Island are spectacular. 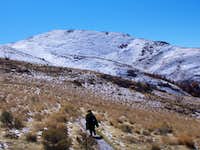 Hiking to Stringham and Frary
The trailhead is located at 41.024269, -112.240191 at the south end of the White Rock Bay Campground. In general, take exit 332 off I-15, drive west on Antelope Drive through Syracuse toward the Great Salt Lake. Pay the $9 entry fee at the ranger shack to get onto the causeway and into the park. Drive the 7.5 mile causeway across the lake. Once across, you’ll see an Air Force/ Special Forces Memorial and a small Marina. Head south on the island road to the Frary Peak trailhead.

The Davis County Causeway from Syracuse to the Island is an interesting piece of construction that has been built, rebuilt and rebuilt again. The 7.5 mile causeway linking the island to the mainland is an earthen dike that was originally built in 1969 and was heavily damaged by the lake’s waves. The state made numerous improvements raising the causeway. Heavy snows and rains in the early 80s raised the lake’s level above the causeways and the road was completely under water. After the state’s drought lowered the lake’s level, the causeway was rebuilt in 1992. A good portion of the “causeway fee” goes toward a fund to rebuild it again if it is destroyed by future floods. 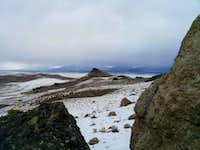 Dooley Knob as seen from the trail

The direct route to Stringham Peak starts at the same trailhead as Frary Peak and follows the same route to the high ridgeline saddle. Leaving from the trailhead, the climb begins a steepish climb for about a mile. The trail goes past the Dooly Knob turn, levels out and continues west along the north side of the mountain. This area frequently has a buffalo or two. After about a 1/3 mile, there is a rocky tunnel which signals the start of the moderately steep switchbacks. The switchbacks get you onto a series of ridges where there are usually pronghorn, coyotes, and more buffalo---keep your eyes open. At 3 miles into the hike, the trail divereges at the saddle and you can see Frary to the South West (about a ½ mile) and Stringham to the North. There isn’t an official trail to Stringham Peak but it is an easy scramble to the top. 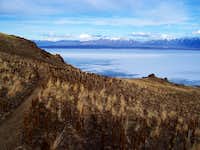 Antelope Island has a long list of “do’s” and “don’t” which vary from area to area on the Island. For the hike to Stringham Peak, the rules are to stay on the trail, don’t light fires, no backcountry camping, and please avoid getting gored by the bison.

See the State’s website for detailed information and fees. You are on state land everywhere on the island. Check out the regulations before you visit.

There are 2 campsites for reservation located on the north part of the island.

Bridger Bay Campground
is the larger of the two with 26 primitive sites available. The sites include picnic tables, fire pits, and toilets are available. There isn’t, however water or electricity available. No horses are allowed

White Rock Bay Campground is smaller with 12 primitive sites. It is similar with picnic tables, fire pits, and toilets are available. Once again, there isn’t water or electricity available. Horses ARE allowed at this site.

Should you decide to spend a couple of days, Antelope Island is great for running, biking, horseback riding, saltwater swimming, snowshoeing and boating. There are several places to grab a snack (in season) as well as picnic on the island.

Cold and beautiful in Winter

The trail to Stringham Peak on Antelope Island is open year round. During the winter, the road to the normal trail head is closed as it is an icy, slick steep grade. Leaving from the lower trailhead adds a ½ mile to the hike.

The best time to tour the Island and attempt any of the island peaks is in the late fall, early spring and winter when the crowds are sparse and the flies in hibernation. In addition, there seems to be more animal activity during the day increasing the likelihood of getting that great camera shot. For late fall and early spring visits, you will most likely encounter some light snow on the ground but not anything you’d need special shoes for. The area around the island is great for winter snowshoeing and possibly cross country skiing.

The Buffalo get to any point on the island

Your primary hazards on the route are the heat, cold, micro-fauna and mega-fauna.

Antelope Island is on the edge of the western desert. The terrain is absolutely shade-less the entire route and, during the summer, it gets uncomfortably hot. There are zero (0) trees the entire way to Stringham Peak. The route usually catches a nice breeze but it’s smart to wear protective clothing and sunscreen. During inclement weather, the route is exposed to brutal winds coming right off of the lake…there absolutely nothing blocking the wind.

There is an abundance of micro-fauna (known collectively as “bugs”) infesting Antelope Island from May to October. The bugs are especially obnoxious during the summer when they swarm, bite and get ingested into random bodily orifices. The flies and gnats lurk out there on the trail, breeding in the buffalo flops and waiting to attack the entire way. Even when they aren’t biting, the tiny gnats stick to sweaty skin and you can come away with a thousand bug carcasses stuck to your face. Either load up on DEET or visit the island after October or before May.

Finally, there is a herd of buffalo on the island. They are big and they can hurt you. You may encounter them at any point in the hike, all the way to the summit. The island rangers advise either going around or waiting them out. Buffalo may look slow, but they can run like the wind and will gore people who are silly enough to get to close. Don’t.