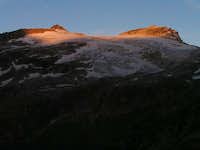 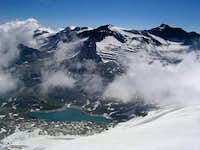 In Hohe Tauern there are many Sonnblicks. Stubacher Sonnblick is not the most known of them, but it is a summit which stands very high on the wish list of any experienced mountaineer. No wonder that on the web you can find tens or hundreds of posts about it. But when you want to read a route description from the West, there is none. It looks as if almost everybody ascended the summit from the East, where Rudolfshuette, a big Austrian alpine center stands. But I'm not guilty for living on the sunny side of Alps, so only basic information had to be enough for the ascent.

The summit of Stubacher Sonnblick is standing in the main crest of Alps. From the Venediger group, the Alps, in this region respectively Hohe Tauern, are sending towards the Glockner group a distinctive crest. Its summits are around 3000 m high and all offer great panorama on the two neighbouring more famous and higher groups, and of course also towards the North and the South. Stubacher Sonnblick and the mountains west of it belong to the northern part of the Granatspitze group. This is a smaller group, stretching in the North-South direction between the more famous Venediger and Glockner group. It has its name by Granatspitze, 3086 m, a close neighbour of our Stubacher Sonnblick, which is far from being the highest summit in the group. Already Sonnblick is two meters higher, and further to the South, Grosser Muntanitz is still much higher. On Sonnblick the main crest of Hohe Tauern winds a little towards the South, on the other side of the high Granatscharte, 2970 m (saddle) the sharp Granatspitze stands, from it the main ridge continues again towards the East, where on Kalser Tauern (saddle), 2518 m, the Granatspitze group ends and the Glockner group begins. 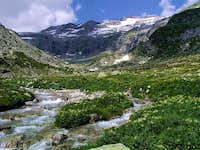 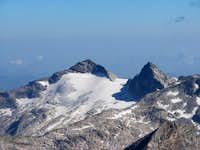 So, Stubacher Sonnblick and Granatspitze are a well known pair, often also ascended in one tour. Both ascents begin on the high glacier saddle between them. Reaching Sonnblick by the South-East route is easier, while the ascent on Granatspitze by the East ridge requires some easy climbing (UIAA II. degree). But for reaching the saddle between the two you need a glacier equipment and thus also some experience. From the East, Granatscharte can be reached from Rudolfshuette in some 3 hours, while from the West, you need for the ascent from Karl-Fuerst-Huette some good 2 hours. The summit ascent will take you less than 30 minutes. 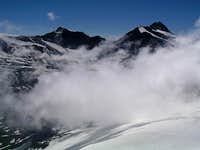 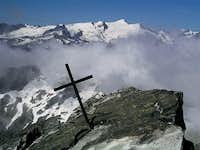 It is easy to imagine why the ascent on Stubacher Sonnblick is so rewarding. Being the highest in the surrounding area, the view from its top is great. It also has the advantage of standing a bit towards the North, so especially views on the northern abysses of Glockner group are astonishingly wild. Dark, steep faces are falling down towards the valley with a big artificial lake, above which the complex of Austrian Alpenverein (Alpine Club) huts is standing. Grossglockner itself is rising a little remotely, in the side ridge towards the South, but its dark horn is still very impressive. More towards the East Grosses Wiesbachhorn and its neighbourhood is outstanding. And on the West the broad white grlaciers of Grossvenediger are shining. More distant peaks are too many to name them, even the most prominent ones. Especially the view towards the North is rich with mountain groups and beautiful peaks, while towards the South the view flies along the Landegg valley, which allows that also summits on the Southern horizon can be seen. So, over the green Defregger Alps you can see peeking the wild rocky summits of Dolomites. 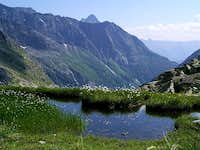 For the broader overview see also the Glockner Group page, while we still don't have the Granatspitze Group on SP.

From the North the approach to Rudolfshuette goes through Stubachertal, a side valley of Salzach valley. From Salzach valley you turn southwards in Uttendorf and drive till the end parking place. From there you can hike-up to the hut or use the cablecar.

From the South all approaches start on the Felbertauern road. One option is to start hiking at the South portal of the Felbertauern tunnel, hike up to Gruensee hut and by one of the two marked paths further towards the East to Karl-Fuerst-Huette. The second option is to start much lower on the road and hike through the long Landeggtal (also: Landecktal) (valley). In any case you need some four hours or more to reach the Karl-Fuerst-Huette. Through the Landeggtal it would be also possible to reach the summit od Stubacher Sonnblick in one day.

2. From Karl-Fuerst-Huette, 2629 m by St. Poeltner Weg. From the hut you ascend towards the NE to the main Hohe Tauern ridge and follow it till the last notch below Stubacher Sonnblick. There you turn right and step on the glacier. The first slope is the steepest (some 30 degrees), it is even more unpleasant because the glacier is oriented towards the West, so the snow or ice is usually very hard in the morning. After some 80 m the glacier flattens and you easilly cross it to Granatscharte. 2 h 30 min.

3. From Karl-Fuerst-Huette, 2629 m by Venediger Hoehenweg. From the hut you descend a bit towards the East and then follow good marks below the main Hohe Tauern ridge (south of the rocks of Rabenstein). It depends on the time of the season how high you reach on the glacier. You keep right (towards the SE) and reach the upper part of the glacier where this one is not steep any more. Now you just easilly walk up to Granatscharte. 2 h -2 h 30 min. Then on top as described in #1.a and #1.b.

4. Landeggtal ski tour. If you ascend from the South-West through the long Landeggtal you will see how it closes on the altitude of some 2300 m - 2400 m. Tis is the so-called Praegrat-Wand, a steep rocky wall which prevents an easy ascent from the end of the valley up to Granatscharte. So, if you want to reach Granatscharte directly from the Landeggtal, you must turn right much before the valley closes. On some 2100 m - 2200 m you choose the best passages over the steep slopes towards the NE. And vice versa, if you ski down from Granatscharte to Landeggtal, keep left, much in the southern direction and only then find the best passages over the steep slopes into the valley. From the Felbertauern road, 1400 m, through Landeggtal directly on Granatscharte and further on top 5-6 hours.

5. The ski tour from Rudolfshuette. In times of tour skiing the ascent from Rudolfshuette goes down to the Northern shore of the lake and then in the western direction up to ombrometer (cca 2500 m) and then by the northern side of Sonnblickkees towards Sonnblickscharte, 2806 m. But below the notch you turn southwards and go along the NE ridge of Sonnblick to the point, where the ascent over the SE slope is the easiest. Depending on snow conditions with or without skis to the summit. 3 h. Pictures below: Mathias Zehring. 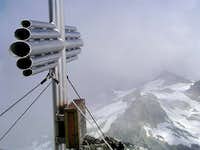 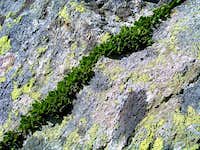 The mountain is in Hohe Tauern Nationa Parc. Otherwise no limitations. 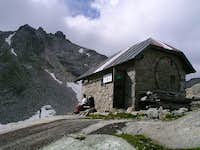 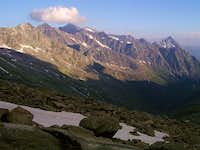 > Rudolfshuette, 2315 m (new name: »Alpinzentrum Hohe Tauern«), is a very comfortable alpine hotel that can be reached by cablecar from the Stubach valley. Ideal basis for instruction courses. Unique in the alps!

> Karl-Fuerst-Huette, 2629 m, is a permanently opened, self-supply hut with 12 beds. Standing on a high terrace above the Landeggtal it is a mid station on long treks which go along the main Hohe Tauern crest (St. Poeltner Weg and Venediger Hoehenweg). It is reachable through Landeggtal in 3 h 30 min - 4 h or from the Felbertauern tunnel south portal in good 4 hours.

Stubacher Sonnblick can be ascended any time of the season, but the ascent in winter can be quite demanding. The summer season in high areas of Hohe Tauern starts mid July, but even then some slopes (which can be steep) are covered with snow. In any case tours require ice pick, crampons and a rope for glaciers crossing.

For weather conditions in Austria see here (then choose regions: Salzburg and Osttirol). Avalanche info pages are the following: For Salzburg, For Tirol.