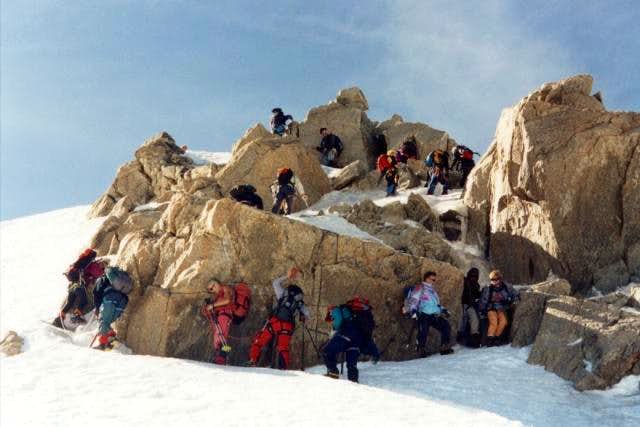 Summit fever on Mont Blanc du Tacul. This is alpine climbing in the height of the summer season on an easy and popular route.

The picture is taken of the short rock step that leads to the summit. Having tagged the top we were escaping our way back down again, because this lot in the photo was just the advance party - the much bigger peleton was busy heaving it's way up the summit ridge and was about to swamp us!

oh god...this is good inspiration to avoid such routes!

I'm looking at planning a short trip in March or early June to do some "snow,ice,mixed" (the Damilano book) climbs. I'd love to hear any advice you have!

March is a bit of an in-between season: it's the end of the winter waterfall ice climbing and too early for alpine rock routes, ski touring should possible though. Also the approach to routes and the descent may be complicated by the snow conditions (avalanche risk), and skis may be required.

Early June can be great (less crowds), but access into the high mountains from Chamonix may be limited due to the availability of the telepheriques - Grand-Montets, Flegere and Brevent will still be closed.

The Aiguille du Midi telepherique is open all year though, which gives you lots of possibilities in the Vallee Blanche basin, such as Mont Blanc du Tacul, Tour Ronde, etc. The Refuge des Cosmiques is a convenient (if expensive) base - otherwise there is the option of camping (or "bivouacing") on the Col du Midi.

The Triangle du Tacul on the Mont Blanc du Tacul's North Face has a great concentration of moderate ice and mixed routes and I've enjoyed doing Chèré Couloir, Contamine-Grisolle and Contamine-Mazeaud. All highly recommended. Take care on the descent though!

That is great info, I will keep it in mind when my window arrives. Still waiting for my Damilano snow/ice route book...