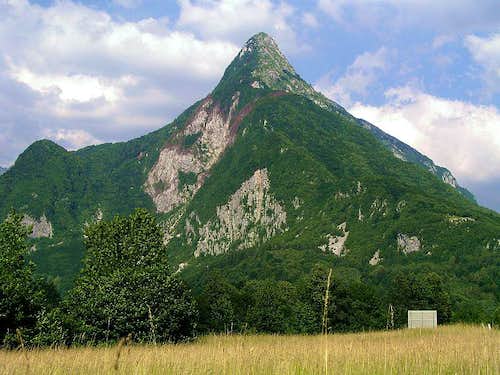 Not much can be said about Svinjak at all - except that it is dubbed also 'The Matterhorn of Bovec'. Sounds strange for a mountain of only 1653 m. But it's because of its scenery role - one can simply not imagine the panorama of Bovec without the sharp peak of Svinjak North-East of it. See its picture - isn't it worth of a SP page?

But it looks so nice only from Bovec and the field around it. From all other sides it becomes evident that it is only the last bump in a long ridge, descending from Bavški Grintavec towards the South-West.

Still, it is a very nice viewpoint. From the summit of Svinjak the whole cauldron of Bovec is clearly below us and behind us, the highest peaks of Julian Alps are rising.

The name of the mountain is a bit weird. Such a sharp peak should have nothing in common with swines (what the name denotes). That's why some people derive its name from a supposed older version Sovinjak, which would mean The Owl Mountain. But that's far from being certain. If interesting facts about Svinjak exist, they should be revealed by locals.

In mountaineering circles not much is written about it. Despite sharpness of the peak a steep but not dangerous marked path ascends its summit, over its northern slopes some hunters paths go, its southern slopes are more abandoned. From its summit it would be possible to continue along the whole ridge to the high summit of Bavški Grintavec. Nobody goes there. It's a very long scramble, a pine-bush fighting, a whole day promenade by a high and lonesome ridge. Try it, if you seek adventures! 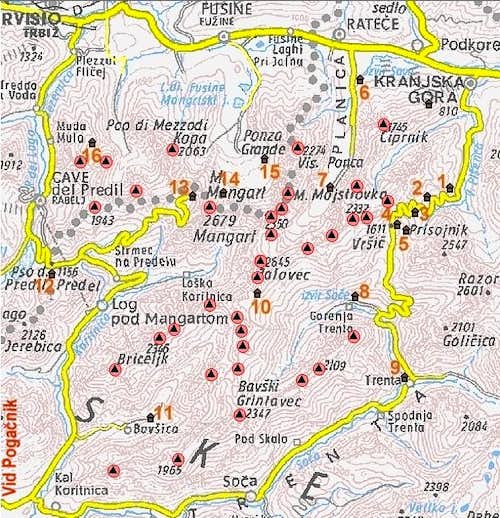 Julian Alps - Mangart/Jalovec Group. Svinjak is far on the bottom.

By car/bus Soča valley and Bovec can be reached over Vršič pass (from Sava valley), over Predel/Predil pass (from Tarvisio) or from the south, from Gorica/Gorizia. Soča valley can be from Italy also reached from Udine via Tarcento.

Celo and its fortress

Only 1 h walk above the Kal-Koritnica village, on the northern edge of the ridge, there is the flat place of Veliko Čelo, 786 m. On the panoramic place we can still see the remains of Austro-Hungarian cannon fortification, which was built in 1915. Together with the Kluže fortress it was a part of Bovec defense system. Otherwise, during the World War I, the Italian army did not get even the positions on the Ravelnik (before Kal-Koritnica), let alone this fortress. The remains are arranged as an open-air museum and are, positioned only a few minutes off the trail to Svinjak, worth of a visit.

The ascent starts in Kal-Koritnica village, 470 m. The village lies just above the confluence of rivers Soča and Koritnica. From the road from Bovec we drive towards Vršič pass and just after crossing Koritnica river we turn left into the village. The trailhead is in the centre of it. The marked path leads us by the ridge all the way towards the North-East. First we walk through the woods, on Smrekova glava trees are replaced by pine-bush and the path becomes steeper. Without any major difficulty we arrive the panoramic summit in 3 hours (1180 m of altitude to overcome). On the Swiss Hiking Scale the route difficulty would be graded T3. 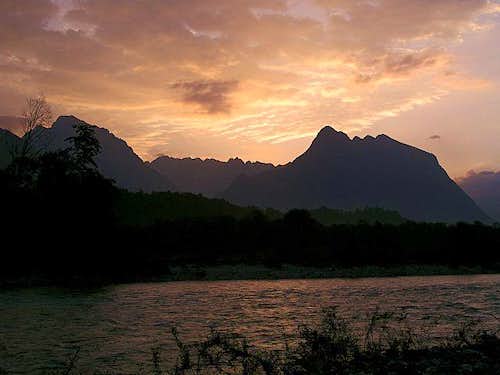 By the river Soca.

Svinjak can be best climbed in late spring and in autumn. Summer is of course possible too, but the tour can be very hot. Chose a clear day to have a great panorama! For weather, see the wunderground site - here's the direct link to Kredarica station, 2515 m (below Triglav summit).