The Swisshelm Mountains are an infrequently-traveled, grassy range of peaks in far southeastern Arizona, lying east of the town of Elfrida, west of the Chiricahuas, and less than 25 miles north of the US-Mexico border. The highest summit of the range is Swisshelm Mountain, which barely makes the list of Arizona peaks with 2,000 feet of prominence, at #68 on the list of 73. While not the most challenging or the most scenic peak on the list, it is nevertheless an enjoyable half-day's climb, and a mountain that deserves more attention than it has. The summit affords grand views of--to name a few!--the Chiricahuas, Dragoons, Miller Peak, and a multitude of summits stretching off into Mexico. The range crest is a quiet and peaceful place, far from the bustle of Phoenix and Tucson; a sleepy agricultural valley lies to the west, and a higher, mostly-untraveled grassy valley to the east. At the base of the mountain, an area of knobby and craggy rock formations reminiscent of the Cochise Stronghold lies, begging to be explored. Aside from a handful of University of Arizona geology field expeditions and a few others, most of the names in the summit register will be familiar ones to peakbaggers. 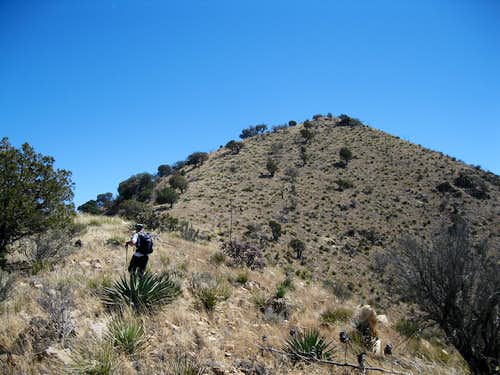 Typical ridge crest terrain, just below the last push to the summit

While the last bit of road into the recommended parking area requires high clearance and/or 4WD, the rest of it's easy. Take US-191 to the small, rural town of Elfrida, AZ. In the town center, turn east onto the paved Jefferson Dr and proceed 5.6 miles due E, passing the Vision Quest Lodge on the right just before dirt. At the end of the pavement, the road splits, with the right fork going to a private home. Stay left and continue heading east for a bit over 0.6 miles, passing a few more homes on the R, and going through a closed, but lock-free gate en route. At 0.6 miles from pavement, split R onto a rougher dirt road, and follow the main track 0.7 miles to a sharp right turn onto a fainter track. Go about 250 feet, then turn R again onto a more solid road; park almost immediately after this. On your left, you should see a faint, overgrown road dropping down into the drainage to the south. This is your route. 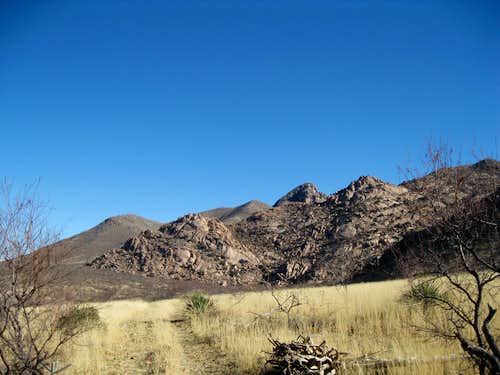 Rock formations near the trailhead

There may be another approach from the south and/or west to a remote bend in the road ~2 miles southwest of Swisshelm's summit, at spot elevation 4591 on the topo. It is unknown if the roads in to this point are passable, or how rough they would be. If anyone is interested in checking out this approach, I'd be curious to hear what it's like, and can provide more detailed directions. It does cross AZ state trust land, so a permit would be required.

Potential routes up Swisshelm are numerous; there's more than one way to skin this proverbial cat! However, some seem to work better than others; the entire eastern side can be considered off-limits unless permission is obtained, and some ridges on the western slope look to be cliffy with potentially challenging terrain. What is probably the most straightforward route to the summit is described on the route page. 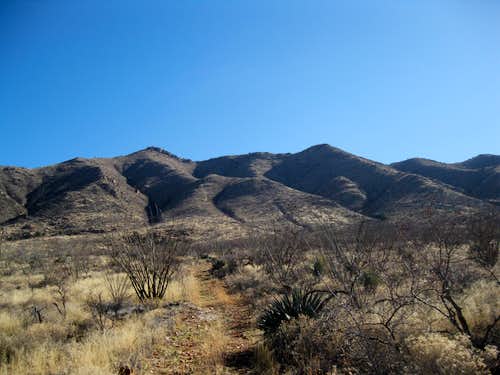 Looking up toward the range from the base. Ascent ridge is at right

The access situation on Swisshelm has been a bit nebulous, and this page will not clarify the issue entirely, but I'll do my best. 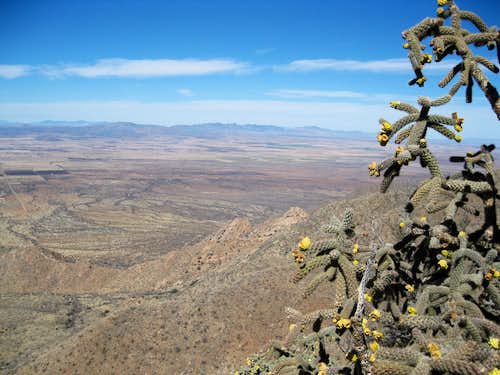 Views off to Glenn and the Dragoons on the way up

The eastern approach lies on ranch land, and previous climbers have been able to obtain permission to climb from that side. Several months back, I contacted the landowner there, who was cordial but seemed unwilling to open the gates to allow us onto his land. He suggested we try climbing the peak from the west, and seemed to have no problem with us being on the peak itself. Other climbers' notes in the summit register mentioned having been similarly denied.

The western approach was somewhat of a mystery when I was investigating it. It appears much of our route lies on what may be private land, but attempts to determine the landowner were generally fruitless. The most prominent landowner on the west appears to be the Vision Quest Lodge (a rehabilitation center for "at-risk youths"). When my partner contacted them to inquire about access, they seemed to not know the status of the land in question, and seemed to be apathetic regarding climbers. The route my partner and I took in passed near several homes, but we never saw any negative signage (or any signage at all, for that matter!), and people who were outside their homes when we drove out in the afternoon seemed unconcerned. So, take that for what you will...my suspicion is that you'll probably be fine. Just, as always, be respectful on the land, and leave gates as you found them.

If taking the southwestern approach, an ASLD permit is required, as the approach and part of the climb cross state trust lands.

Fall through spring. This area is at its most pleasant from roughly November to March. Swisshelm would be a furnace during the summer months, especially considering the nearly-complete lack of shade on the route. 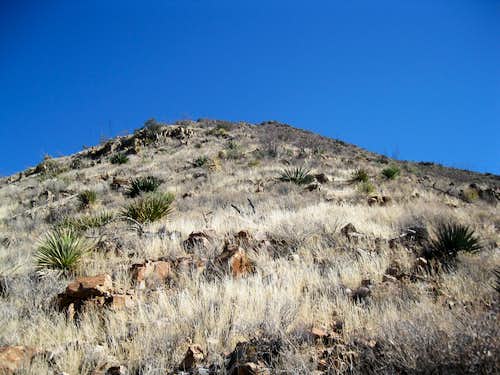 On a higher, gentler, easier part of the ridge

Camping in the Swisshelms is probably inadvisable, given the potential access issues and lack of water. The Cochise Stronghold area in the Dragoons to the north would make an interesting camping experience.

Lodging is available in Douglas, Bisbee, and Willcox. Elfrida doesn't seem to have anything in the way of motels. 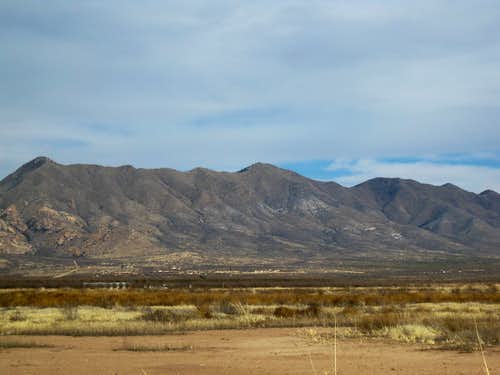 The Swisshelm range from near Elfrida, AZ. Swisshelm is at dead center.The ascent ridge we took tops out at the prominent knob between the two highest peaks.