To get to the Täschhütte, first of all you need to go to the Täschalp/Ottowan (2205m).
Täschalp can be reached either from Zermatt, Täsch or by the Europaweg (from Grächen).

From the Täschalp towards the Taschhütte (which can be seen from the Taschalp): as there is only one path (actually there are two, but one of those is more some sort of road, so there is only one real mountain path) the Täschhütte is hard to miss: about 1h.
Summary:
- Zermatt-Täschhütte: ca. 4h
- Täsch-Täschhutte: ca. 2h30-3h


-There is one altenrantive way towards the Täschhütte: This way is however very long and not always marked. This route starts at Zermatt, after which you go the the Fluealp (2618m)(ca. 2h-2h30)(cable cars can be taken up to Sunnegga and Blauherd (2571m)). From Fluealp the path continous for about 15-20min. After that the hiking path stops and an Alpine route starts. Continue untill you reach Pfulwe (3155m). Descend for a while untill you reach a junction, with one path leading towards the Täschalp, the other directly to the Täschhütte (ca. 3.30h-4h from Fluealp)(combined: 6-7h)

(All these time-indications are those that can be found on the signs on the different paths as well as on hiking maps of Zermatt. Most places will be reached in less time than indicated on these maps or signs.)

Information about the hut

The Täschhütte (SAC Sektion Uto) has been rebuild in 2008.
Opened between the middle of june till the end of september. In Spring opened in April and May.
- 80 places (10 in winter)
- Prices:
* member Alpenclub: 27 CHF, 68 CHF (without or with supper)
* Normal prices: 39 CHF, 79 CHF
* prices for kids and youth: see website 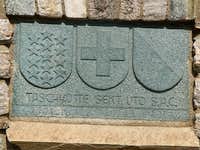 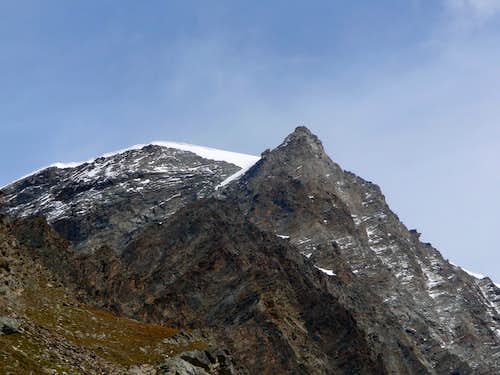 This literature won't be very helpfull when you are in the mountains. I've put them here simply because I find them very interesting to read, and often, despite the fact these books are quiet old, remarkably up-to-date. It is to say, most information given in these books about hikes and climbs is still very much the same as nowadays

- 'A guide to Zermatt and the Matterhorn', written by Edward Whymper. First published 1897. Quiet old, but most hikes and climbs are, remarkably, still up-to-date. Täschhütte itself didn't exist at that time, but the climbs and excursions that are now made from the hut were already made at the end of the 19th century. Interesting to read! (pages 121-125 are about the climbs and passes given above)

- 'A Guide to the Western Alps' by John Ball, published in 1866.
Some old stories and information one the passes that can be climbed from the Täschhütte (Mischabeljoch, Alphubeljoch, Allalinpass,... pp. 357-359)

- The mountain/travel guides of John Murray, like the 'Handbook for Switzerland and the adjacent regions of the Alps', or 'A hand-book for travellers in Switzerland and the Alps of Savoy and Piedmont.' Published during the 19th century (realting to Täschalp and taschhütte, although it didn't existed then, can be found in the chapters about Zermatt and Saas Fee).