Table Mountain rises in the Wminuche Wilderness of the San Juan Mountains of southwestern Colorado. Its summit is made of a large grassy hump with 468 ft of prominence making Table Mountain Colorado’s 869th highest ranked peak. A rocky area to the east of the summit, may be confused with the true summit.

Maps show a trail called Kitty Creek starting at Shaw Lake near Route 160 going up to join Highline Trail very near the summit of Table Mountain. When I climbed Table Mountain in July of 2016, it appeared that a fire had ravaged the area a few years prior to my visit. At the trailhead on Shaw Lake, I found no sign of the trail. Farther up, remnants of a trail could be seen here and there. With no other landmarks visible, I found myself dependent on my GPS. Unless the trail is built again(check with forest service), you should consider it non-existent. 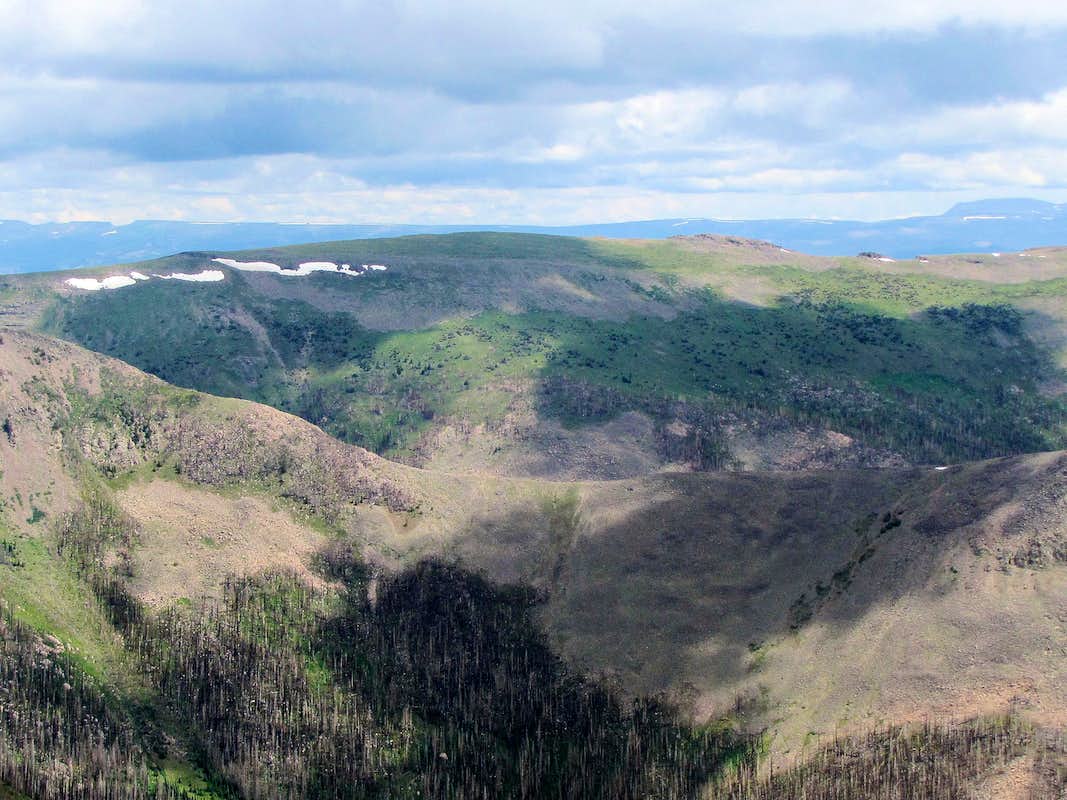 From Wolf Creek Pass on Route 160, drive a few miles east and turn left onto Route 410 to Big Meadows Reservoir. Under ordinary conditions, this is a well graded dirt road passable by any car. After a few miles you will see a split on the road with left going to Big Meadows Campground. Go right (on Road 430) and shortly after take right and continue less than 5 miles I suppose to reach Shaw Lake parking area (see map below).


Kitty Creek Trailhead was supposed to be on the left side of the road on the southwestern edge of Shaw Lake. As mentioned above, when I visited the area, a fire had ravaged the slopes. Where the trail was supposed to start, I only saw burnt trees with a dense growth of small aspen trees which required much bushwhacking. My GPS showed where the trail used to go. After a while, bushwhacking became easier.

I then crossed an abandoned Jeep road and continued up the slopes going where the GPS told me to go. Fallen trees created many obstacles slowing me down. At around 11800 ft the forest of big burnt trees ended and a nice grassy slope appeared making the going much easier. Farther up, dead dwarfed trees appeared creating a nice foreground for the spectacular view of the distant peaks.

Going higher, the false rocky summit appeared. I began hiking toward the false summit thinking it was the true summit. Closer up, had to find my way up the rocky slopes.

Once I reached the top of the rocky area, I realized that the true summit was a grassy area a few minutes west. Views from the summit. Zoomed view of elks to the west of the summit. Elk near the summit