Tactics of climbing in the independent pair-two

Risks and additional dangers associated with committing alpine climbing ascents in the format of an independent pair-two.

This topic is relevant for climbers, whose level of climbing sportsmanship has not yet grown to consistently confident self-climbing, but ambitions are already rushing ahead and calling to the most technically complicated and beautiful routes. Talking about the advantages and disadvantages of the tactics of climbing in the format of an independent pair-two regularly comes in relation to complex technical alpine routes, especially such famous climbing idols as Ushba, Dykh, Matterhorn, Shkhara, etc., on which this format of ascent is quite acceptable and effective. But there exist some nuances, about which I will say below in this article. 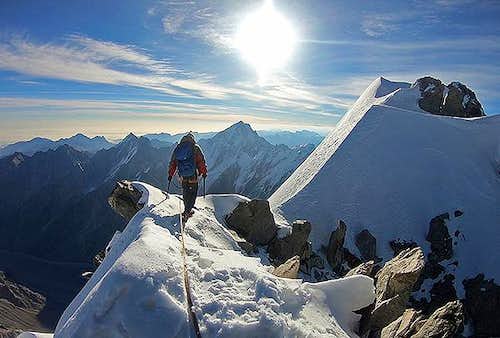 So, small independent team – only two climbers. The fastest, mobile, and successful tactic format for climbing technical alpine routes. The undoubted advantages of this format are the independence and mobility of the schedule - any difficulty associated with the weather, short-term malaise, an unforeseen difficulty on the route – can be solved promptly, without delays characteristic for the larger groups. A pair-two is the best solution for trained teammates who have sufficient climbing experience and who do not want to be dependent on the other people's problems, which is inevitable if the ascent is performed in a large group. It would seem – pair-two – is the perfect solution for the most climbing technical routes? Alas, in reality, it is not as obvious as it seems at the first glance. Climbing in a pair-two is associated with serious additional risks, which in no case should be underestimated, and it is often necessary to take the part in the climb with a group, despite the fact that it would be faster and more successful in a pair-two. What are the risks associated with climbing in pair-two, which, as a rule, remain outside the classical training mountaineering programs?

The first and most important thing that should be understood with full responsibility is the extremely limited ability of the pair-two for self-rescue in the event of an accident. Having the skills of first aid and mutual help, possession of the technique of rappel with a injured partner or pulling the body from crevasse is all very good, but it’s not serious to expect that in the event of injury of one participant, the other will be able to do anything - this is a profound and dangerous error. Given the additional complicating factors - fatigue, difficult weather conditions, a stressful condition, you need to soberly understand that there will be no benefit from theoretical knowledge in the rescue assistance in the mountains. It does not mean that studying technical skills for working with equipment in various non-standard situations in the mountains makes no sense - no, of course there is considerable benefit in this and having a number of skills in reserve is useful and even necessary for any climber. However, you should not expect that the possession of these skills will be a universal remedy for trouble - it is self-deception. And priority should always be put on how to build a tactical plan of your mountain ascension to avoid these troubles, and in the event of an accident - not to stay without the possibility of receiving external assistance. 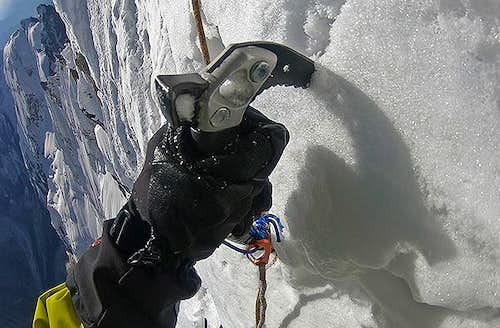 In the most critical situations, the pair-two climbing team is unable to self-rescue - they can only rely on timely external rescue assistance, and build a tactical ascension plan based on this principle. Attempts of self-rescue in a pair-two very often lead to a critical loss of time, and as a result - to the aggravation of the situation as a whole, often with the most dismal consequences. Examples of such situations are numerous. Please note that the most common prerequisites for accidents in the mountains with a pair-two climbers, as a rule, are: the uneven distribution of the climbing experience between participants, the underestimation of the complexity of the climbing route as a whole, lack of coordination with local rescue services and (or) other groups located in the area of ​the ​ascent.

As a summary of this article, the advantages of climbing in format of an independent pair-two should be used very carefully, the decision should be based on your own and other people's experience, taking into account and carefully weighing all the pros and cons, because with the tactical advantages in this case are associated serious risks which in no way should be underestimated.

More articles on the mountain climbing from MSC AlexClimb