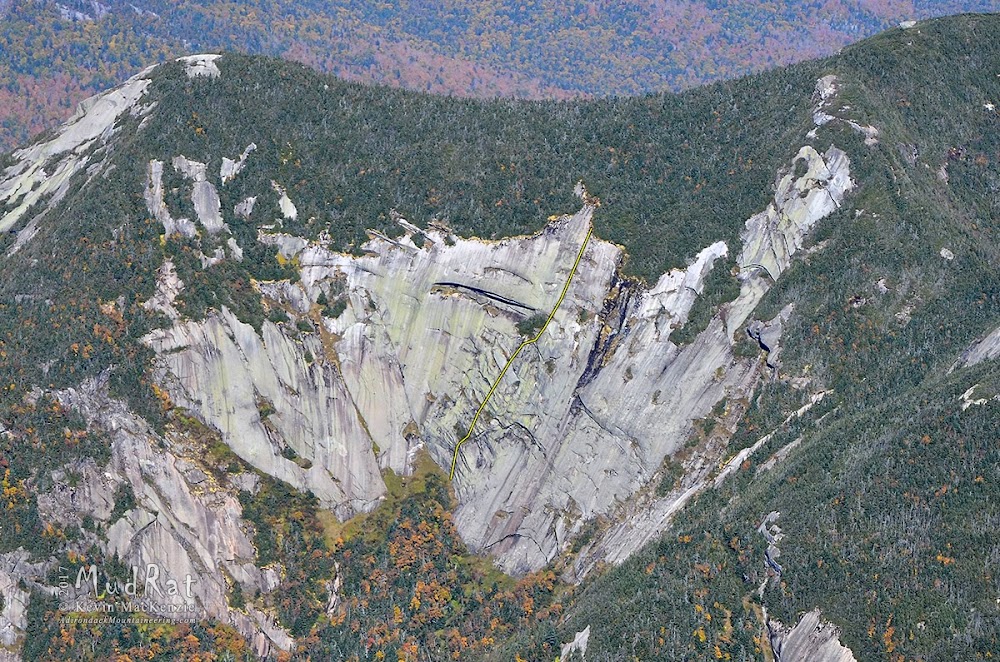 When I get curious about something, anything, I hold onto the spark even if it takes years to get to the project. A line up the center of Gothics South Face lit that spark several years ago when I climbed the Original Route up the obvious crack along the left-hand side. I saw steps, cracks and a possible exit between the mossy area defining the winter route where the ice forms (primary drainage) and whats called the Piano Ledge, an overhanging section above the steepest part of the face.

Jaryn Deshane joined me once again. The approach involves walking up the Lake Road and then up the Weld Trail over Pyramid to the Pyramid/Gothics col. The bushwhack begins by descending west down a steep ledge ridden drainage to where one can see the face. I wanted to make the approach during the day of the climb as easy as possible, so we bivouacked high on Gothics the night before. The humidity was high, and our ambition was low. It took roughly three hours to make the trek and another 30 minutes to set up camp in the dark and cook a bite to eat. A curious deer mouse accosted Jaryn as I snickered.

We set the alarm for 5:30 AM since we had to cook breakfast and walk the rest of the way up and over Pyramid with a climbing pack. The hike and bushwhack would take 2 hours. I wanted enough time to climb most of the face before possible rain showers (the probability rose after 1:00 PM) complicated the attempt. A good nights sleep and even the thrushs melodious song didnt heighten our ambition on the 22nd.

I racked up at camp, placing about 15-20 pounds of gear on my harness and wrapped the 10 pound/70M rope around my shoulders. I wore it up the trail. We looked like ridiculously serious hikers! Jaryn carried a pack with food and a few other necessities. The slog up seemed to take forever as it always does, but we regained some momentum atop Pyramid when we viewed the face; it was dry and in prime condition to climb.

We kept up the pace to get to the base as quickly as possible. We dropped down the steep gully from the col and last water before the climb (about 600 vertical feet lower). Its often running steadily, but we found a mere trickle and struggled to fill a liter each; strange given the amount of rain weve received.

The potential line was on the other side of the face and required the requisite traverse across the bottom under the Goodwin Route, Gothic Arch and climber Tad Welchs 2016 route, Pure and Easy. A nearly vertical wall with obvious plate sized flakes, good gear and lichen marked the start. We readied ourselves in the tall grasses. I pondered what it would be like. Too dirty? Too run out? Studying photographs only tells part of the story. I knew there was ample protection for much of the face and guessed it would likely be harder to protect above.

I climbed the flakes to a small ramp, stepped left and found another vertical wall. This area was the crux of the pitch and the route, perhaps 50 up. I couldnt find a good way to break through, however. I saw edges for my feet, but didnt trust the smaller hand holds. Eventually, I maneuvered up onto lower angle slab and into a tree island where I belayed Jaryn from a 10 wide spruce. We were both fighting a sour stomach and operating at about 70%; climbing took our minds off internal matters. I felt relaxed tied to the tree and asked if Jaryn wanted to lead pitch two. He agreed. 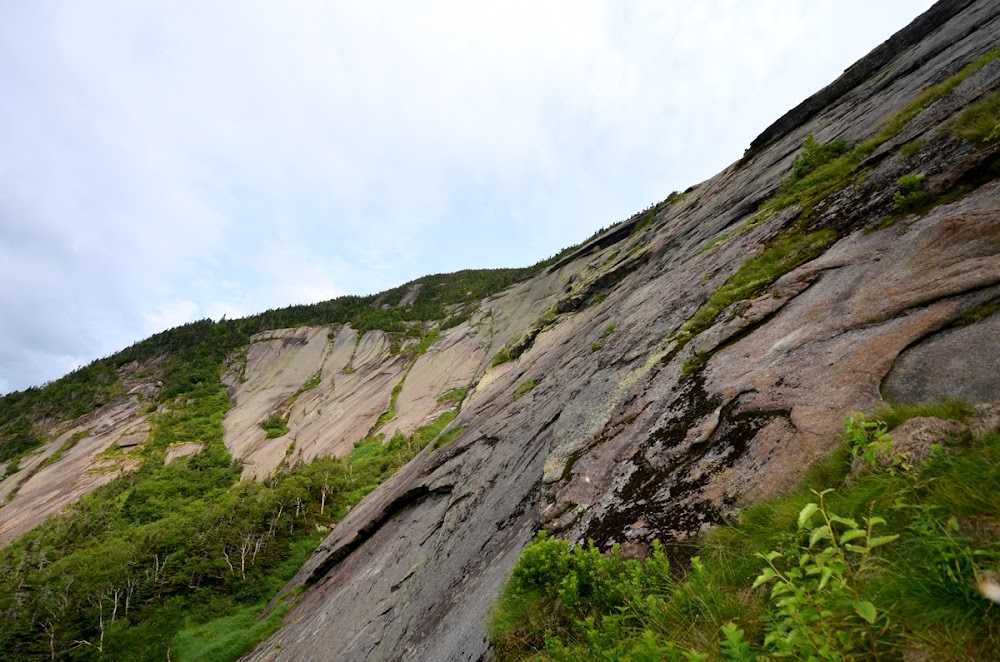 LOOKING ACROSS THE FACE 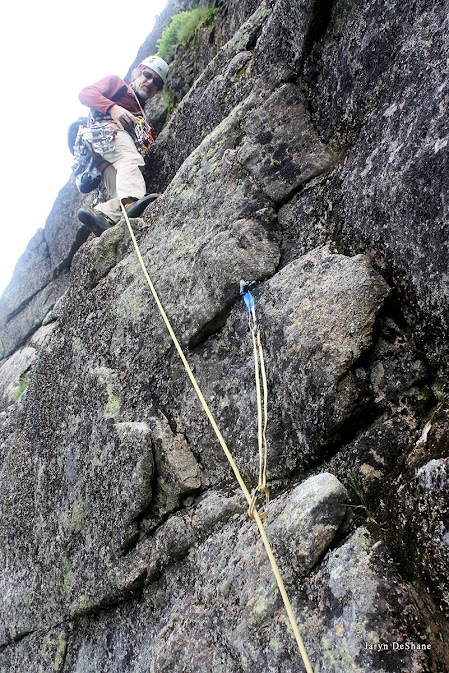 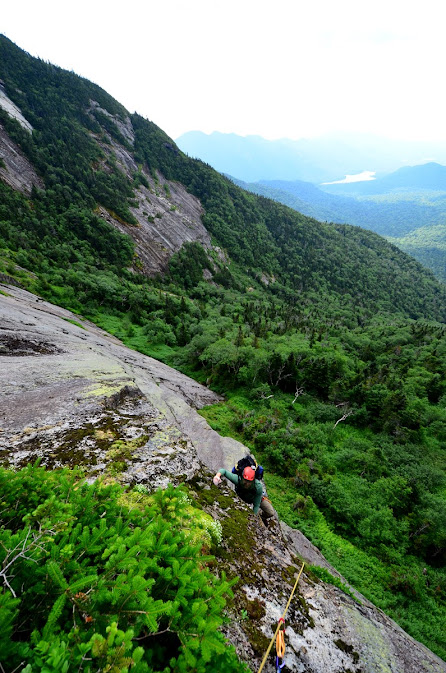 Jaryn climbed a short off-vertical wall onto slab and up to a large loose block. He tapped around to make sure it wasnt overly loose and continued up a large rounded overlap, the crux of the pitch. Good dimpled rock, indicative of the face, led to a wide crack. It led up to a small tree island. Jaryn fit into the 10 deep crack quite nicely and looked right at home when I arrived at his position. Only his head was sticking out.

The view from this point was stellar. A large overhanging ledge, the Piano Ledge, was positioned up to our left. Weathered grooves made its long edge appear wavy. Saddleback and Basin sat to the west. And heavy cloud cover was moving over Pyramid and a small crowd on its summit. I could have relaxed here all day, but I didnt want to be sitting on the face if a storm moved in.

The next pitch climbed the remainder of the slab under a large tree island right of the ledge. The ideal line would be to take it from lower along the crack on a cleaner line, but we were set up at its top. Jaryn led up dimpled yet lichen covered face for about 50 to a large left facing corner. He placed small gear as he could and belayed out of sight 180 feet higher. This pitch was easy climbing and I arrived to find him comfortably sitting along a small corner centered between the Piano Ledge and mossy line of the winter ice route which is easy to spot on account of its heavy moss. We were on a wide tract of moss-free anorthosite. 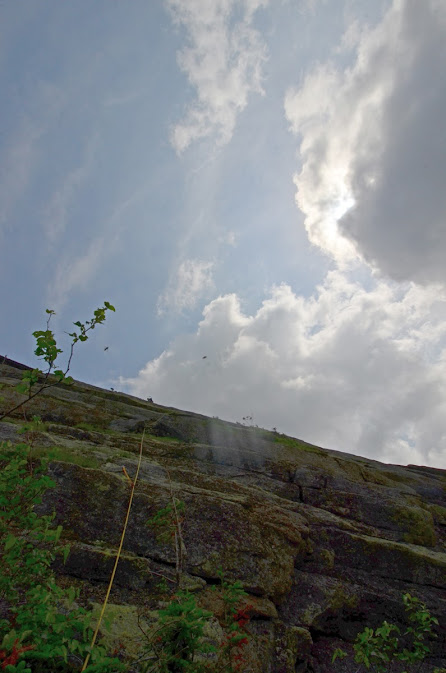 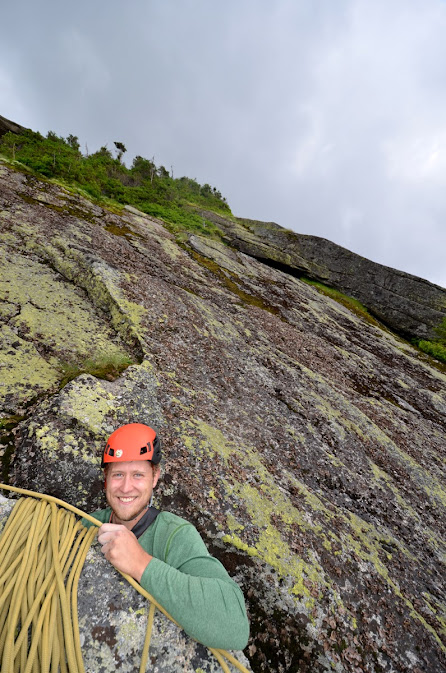 NO FALLING FROM THIS CRACK!

I took the final pitch. The hardest move followed the crack/corner to its top and stepped over it onto a bit of steep slab to easy, but runout slab. I ran it 200 to the trees and belayed Jaryn from a mossy cushion in the trees. We packed and walked up the remainder of the slab to a herdpath in the trees and the summit of Gothics (about 2:30 PM). We were elated as we emptied the pack in yard-sale style and renourished. Two hikers, Yanina and Nick (friends of Jaryns) were fun company and helped us relax. The climb had taken about four hours in total. It took another hour to get back down to camp where we cooked a meal, named the route Takillya Sunrise (5.7) and exited slowly. The route was 4 pitches over 610 in length. More route details may be found at http://adirondackrock.com/newroutes....ain_South_Face .

Ive yet to have a bad day on Gothics with so many things to see, hike, climb and photograph. 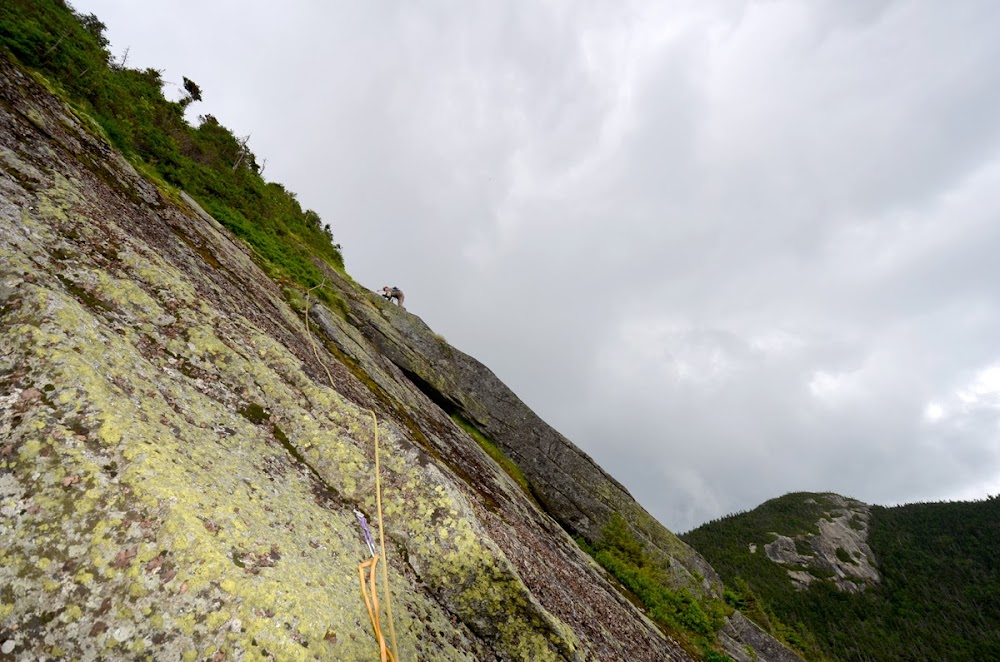 CAN YOU FIND US??? (PHOTO BY NICK SALONY); MANY THANKS! 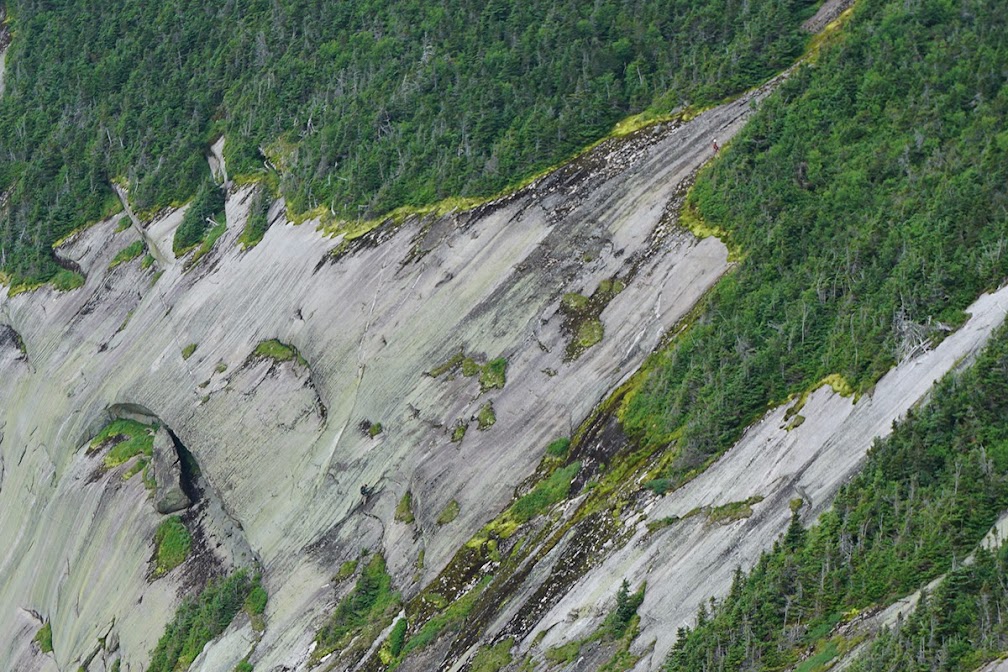