The major peaks of Tantalus range are located aproximately 10-15km's NW of the city of Squamish. All named after greek gods and the highest peak is Mt Tantalus it's self for which the entire range is named. Allthough only 2600M's in height, given the fact the base of the mountains reach sea level it is an impressive rugged range of mountains and should be treated as such. Trips into this range are often serious undertakings due to the harsh and remote terrain. The mixed nature of glaciers snow and rock make late spring and early summer the best time to climb peaks in this range when snow ramps are still in place yet the steep rock is exposed and hopefully dry. This range was given the name Tantalus beacuse it is such a tantalizing site to see from almost anywhere in the sea to sky corridor between Vancouver and Whistler. Every mountaineer in the Pacifc North West should have this on there list of places to visit and climb.

Getting to the Tantalus range is somewhat problematic due to it's isolation by the Squamish river. People have canoed, tyrolean traversed, paif for a boat ride and choppered in to get acess. One popular approach is to chopper into lake Lovely Water and start the climb from there allthough many diehard have approached via Squamish river and bagged the peaks from sea level. Typicaly a trip though the Tantalus range is a week long affair if seeking to bag several peaks allthough some will go for the big prize Tantalus itself in just 3 days.

Another approach if seeking to bag the highest peak Tantalus is via Sigurd creek trail. This can easily be accessed my motor vehicle via the Squamish Valley Road. Tantalus has been climbed in just 2 days via this route but by extremely fit parties. The elevation gain will be huge as well from here since the trail is close to sea level. The trail does not however lead to Tantalus so you will eventually break away from the trail and traverse the slopes below Pelion and gain the north ridge of Tantalus.

No real red tape, other than the fact leaving your vehicle at any potential entry point may be undesirabile due to the potential of vandalism. Also the cost of chopper and boat approaches must be factored in for those not willing to bag it in true mountaineering style from sea level. There is an Alpine Club of Canada hut at Lake Loveley water that can be reserved and is open to the public at a cost of $10.00 per night (604) 687 2711. Also a newley completed hut in memory of Jim Habrel has been recentley completed in the high col between Serratus and Dion. It is also open to the public. 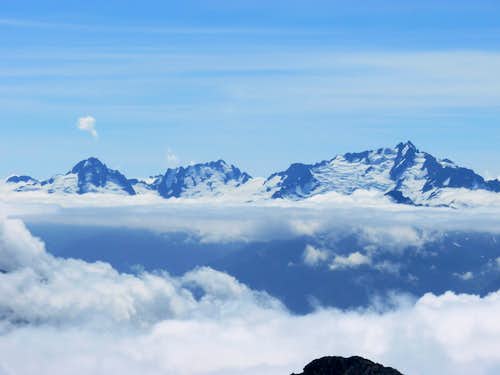 From left to right can be seen.

Alpha far left, Serratus middle and at the far right the twin high peaks Tantalus and Dion. Tantalus the highest point of the range. Picture was taken from the summit of Tricouni summer 06

Probably the best call to anyone taking a trip here would be to purchase the very detailed book Alpine Select This manual will provide very through details about river crossing, helicopter companys and detailed airel photos showing routes and minor peaks.