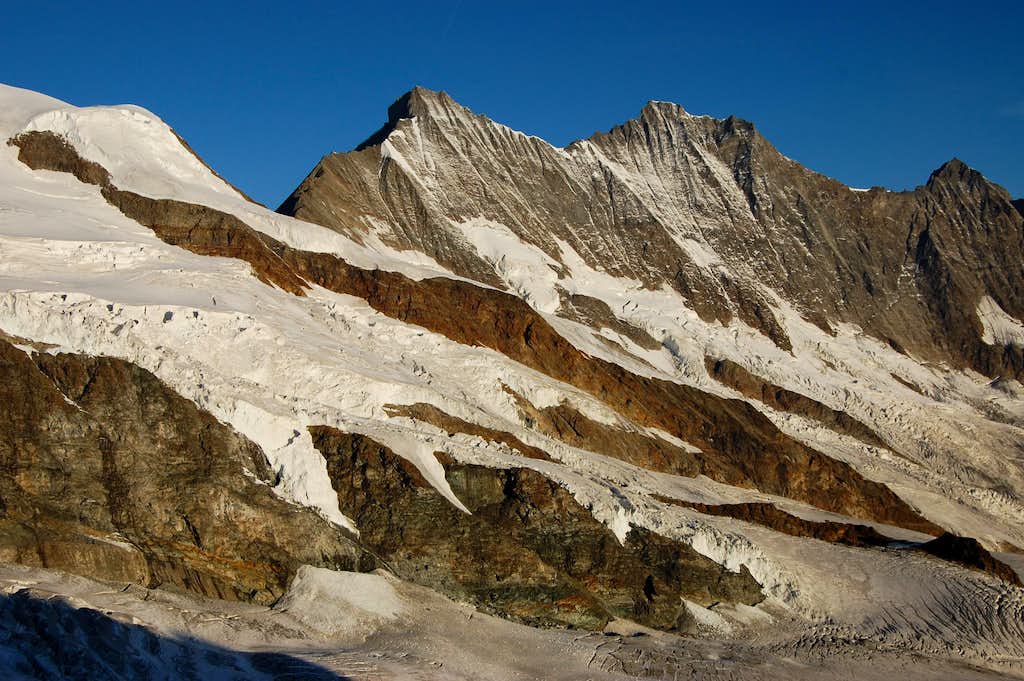 Swiss alpine classic: the Tasch-Dom Traverse
This is one of the finest expeditions in the Swiss Alps, involving the traverse from one of the most striking summits in the Pennine Alps, the Taschhorn 4491m – and finishing on the highest summit entirely in Switzerland, the Dom 4545m. The route follows a ridge that is over a kilometer in length – and all above 4000m. First recorded crossing was on 3rd September 1895, by O. Jones and E. Furrer. The route is graded at alpine Difficile with rock sections of III but conditions could vary considerably according to snow cover, icing etc. It would be a decidedly dangerous route to be caught on in bad weather, the ridge being exceptionally narrow and exposed to the elements. It makes sense to start the route at the summit of the Taschhorn and finish at higher summit, the Dom – partly for aesthetic reasons. There are other reasons: to descend the ridge from the Dom end is more difficult and hazardous due to the steepness and looseness of the terrain; but then considering the descent at either end, having completed the traverse – it is far easier to walk down the straight forward normal route of the Dom (F – or even the Festigrat at PD), than to down-climb the technically difficult south ridge of the Taschhorn (AD / III). The normal approach to the start of the traverse would be via the South Ridge of the Taschhorn (AD, pitches of III). This can be accessed from either the Zermatt or Saas Fee valleys – converging at the Mischabeljoch Hut at 3851m. Several other routes are possible – suggest refer to excellent Taschhorn page by OM – but I would further suggest that the big traverse between these two Swiss giants is epic enough in itself, without adding in a hard Taschhorn route at the start. Having said that, it is possible to add other peaks at either of the ends of the traverse: at the southern (Taschhorn) end it is feasible to add in the Alphubel – and even further back four thousanders such as the Allalinahorn. At the northern (Dom) end a traverse of the entire Miscabelgrat, taking in Lenzspitz and Nadelhorn – and more – would create an extraordinary expedition. Naturally very stable weather and one or two high altitude bivvies may prove necessary, depending on what is added on.I completed the route myself in summer 1986, climbing with J.Watt. We ascended from the Zermatt side, climbed over the Alphubel 4206m and then, after a night in the Mischabeljoch Hut, made a fast un-roped ascent of the Taschhorn south ridge, before starting the mighty traverse. This, we discovered, was a lot harder - and soon had us putting the rope on! Overall it probably ranked as the best alpine route either of us completed – and in our exuberance afterwards we descended from the Dom summit to the valley 11,000ft below in a mere 3 hours (the effects of which have re-surfaced in my knees and spine in recent years!) 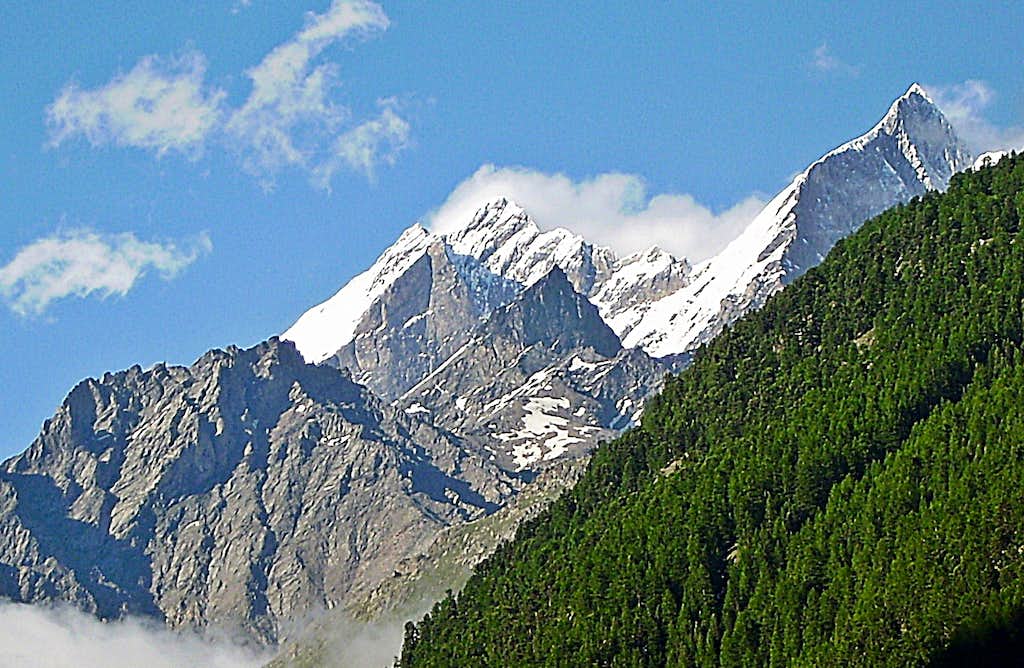 Tasch-Dom traverse from Zermatt side 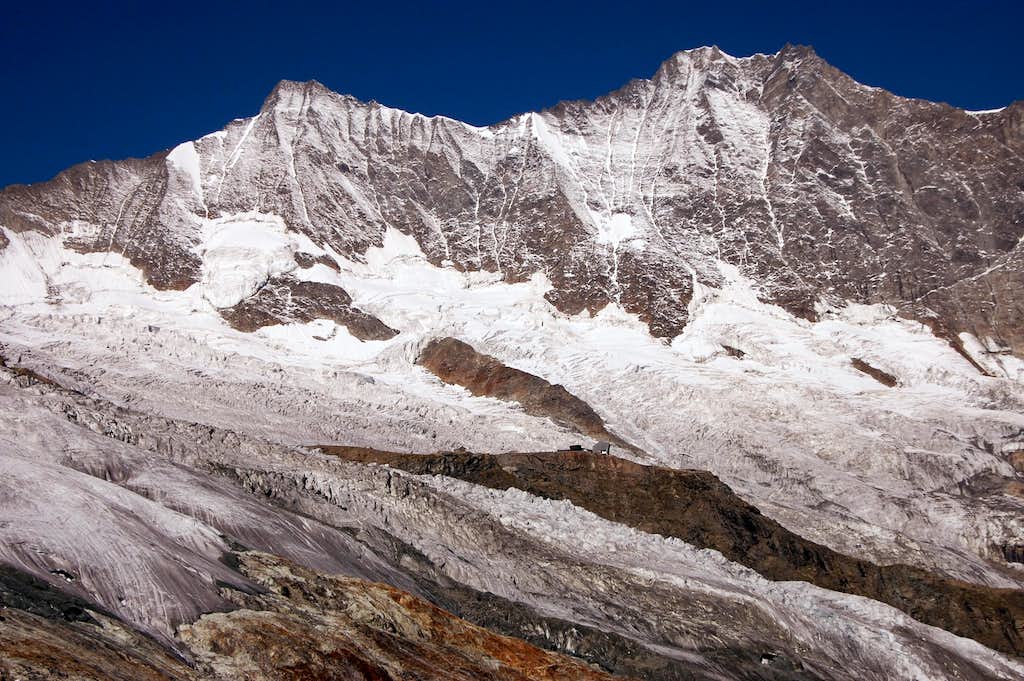 Tasch-Dom traverse from Saas Fee side 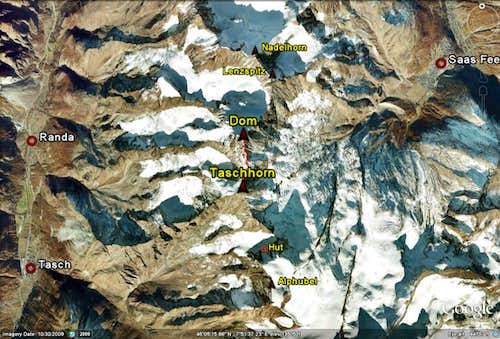 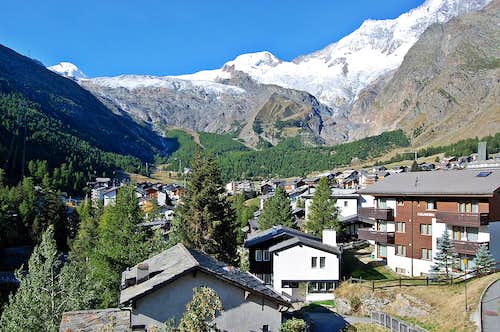 Saas Fee with from L to R Allalinhorn, Alphubel and Taschhorn visible in the back ground.
The Zermatt and Saas Fee valleys are in the Pennine Alp region of south west Switzerland. Both are accessed from Brig, in the Rhone Valley. There are excellent road and rail networks.The Mischabeljoch Hut is a small aluminium cabin which sleeps about 12. It is very high up at 3851m and it is more of a bivvy really, than a hut. The approach is long and complex, from the Zermatt valley side: potentially involving a night at the Taschhutte at 2701m, before making a crossing of the Weingartengletcher and steepish ascent up to the col. The approach from the Saas valley is preferable, being much shorter, in that it can be reached from the top of the Lanflue cableway up at 2780m.

Steep rock on south ridge of the Taschhorn 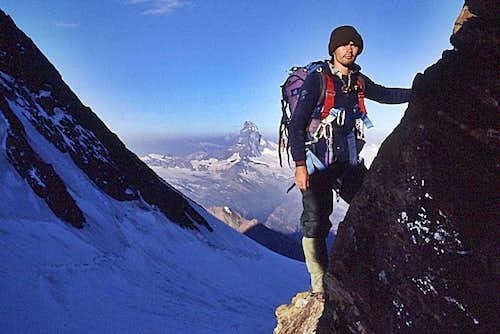 J.Watt outside the Mischabel Hut at start of south ridge of the Taschhorn 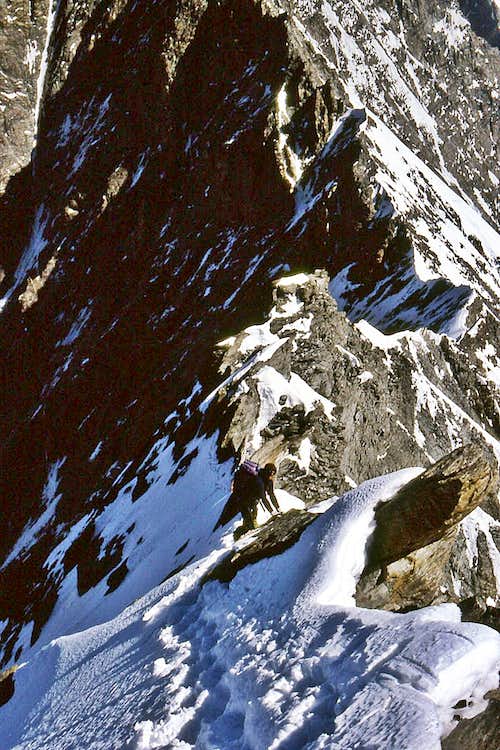 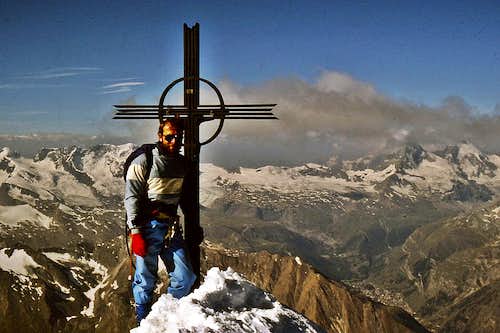 A much younger me at summit of the Taschhorn in 1986
Descend NNE ridge from Taschhorn summit towards the col between the two summits, the Domjoch. There is an immediate sense of exposure with a precipitous drop of thousands of feet, immediately below – and the climbing is tricky, down-climbing steep rock interspersed with snow/ice. A subsidiary summit is passed and then a short distance later a rocky step which has to be reversed before entering a section of ridge which is predominantly snow. At this point there is still some height to be lost before reaching the Domjoch, at the lowest point. The ridge here is very narrow with dizzying drops on both sides. When I did the route in 1986 there was a section of crest that was too narrow to stand on and we were forced to drop below the crest on the western (Zermatt) side. You could literally punch a hole and peer through one side to the other. However, I understand this section of ridge is sometimes heavily corniced on the western side. When I was on the route, there were just a few small bits of cornicing here and there.The Domjoch can be reached about an hour to an hour and a half from the summit of the Taschhorn – dependant on conditions. For some distance the ridge is almost horizontal, albeit following a slightly undulating course – before the start of the climb up to the Dom. The crest becomes rockier and for a few hundred metres is steep and hazardous. My recall of this section in 1986 is that it was like trying to climb near vertical and narrow piles of loosely stacked dinner plates. It was appallingly unstable – and still incredibly exposed on either side. Belays were nonexistent – and in the event of a fall, all that could be done would be for a roped companion to jump over the other side! A few loose Gendarmes have to be traversed and finally a small level section, before the final sharp pull up to the Dom summit – on thankfully more substantial rock. Finally, the summit of the Dom is everything a summit should be: small, with impressive drop-offs all round. The view is stunning in all directions – especially looking back along the traverse towards the Taschhorn.

1-2 hours from summit of Taschhorn to Domjoch.3-4 hours from Domjoch to Dom summitOverall time 4-6 hours in average conditions – note: this is just for the traverse. Added to this needs to be the 4-5 hours to climb the south ridge of the Taschhorn – and then the descent from the Dom, which may take 2-3 hours if just descending to the Domhutte – but nearly double that if descending all the way to the valley bottom.

Descent from the Dom is straight forward. The longer and easier way is the Normal Route via the North Face – a Facile graded circuitous glacier route back down to the Domhutte. A more direct and sporting route is to head straight down the Festigrat, graded PD – which joins the Normal Route at the Festijoch, less than an hour from the Domhutte. The Festigrat is not a good option if conditions are icy. 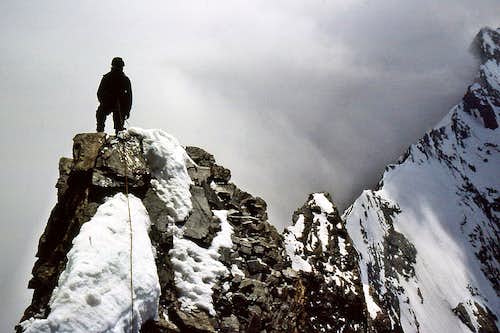 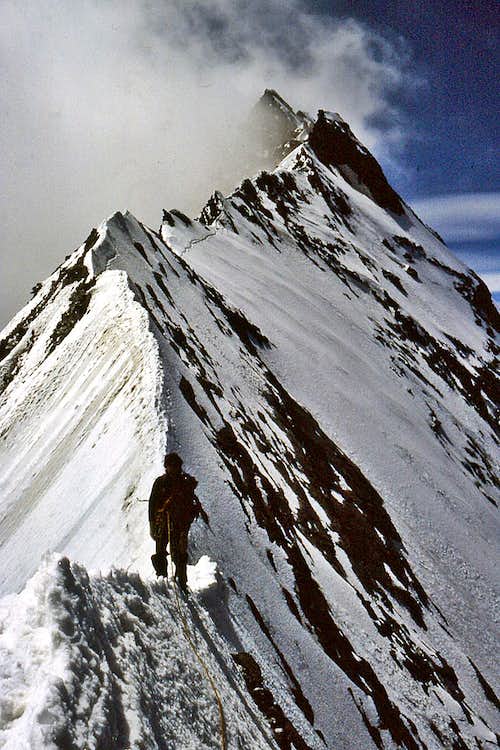 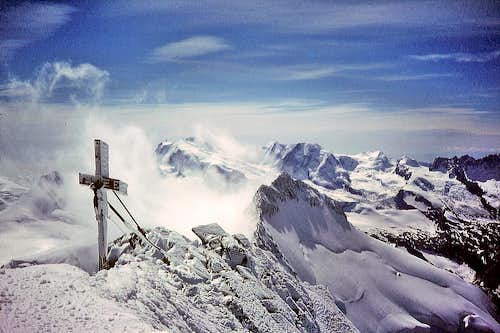 The summit of the Dom is everything a summit should be 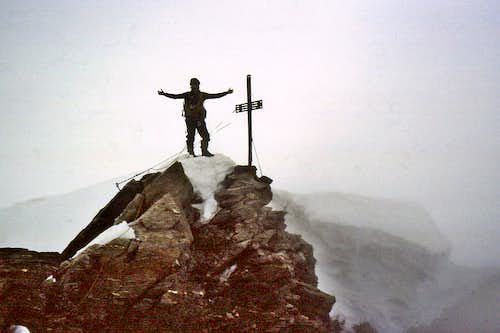 Elation at reaching the summit 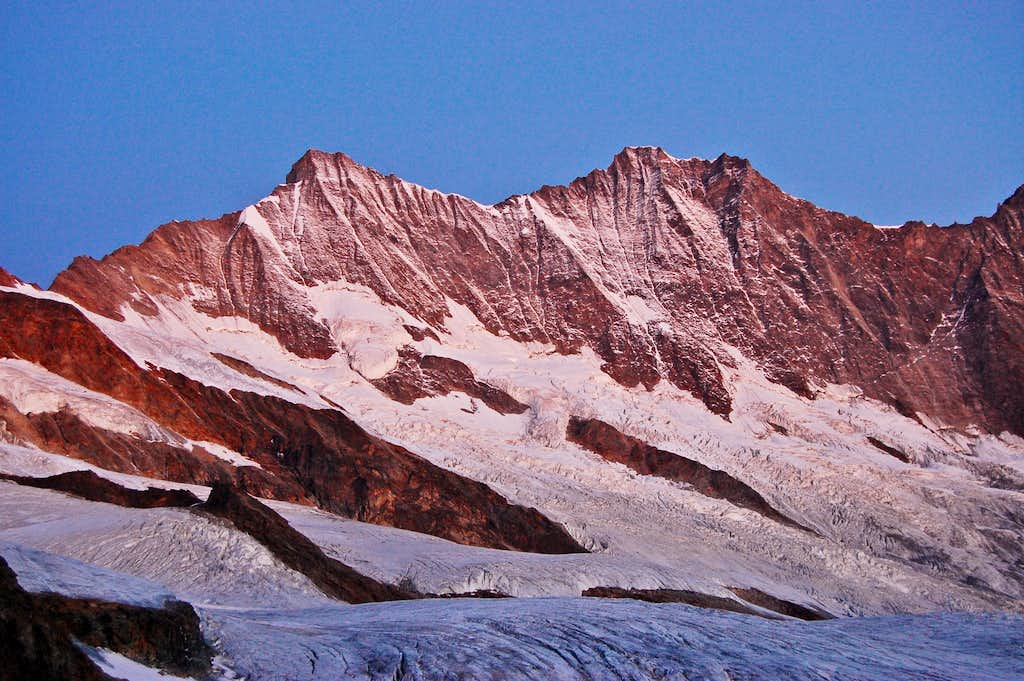 Taschhorn and Dom at sunrise