Tatoosh Traverse In a Day

Full trip report with pictures and beta:  http://www.runningfarther.com/tatoosh-traverse-fkt/
Strava:  https://www.strava.com/activities/1076323999
My first trip up Rainier, I was astounded by how big the mountain looked from Paradise. My second trip up Rainier, I was astounded by this chain of peaks directly south of Paradise with steep, jagged lines looking totally inaccessible. The Tatoosh Range, I found out they were called. Looking them up, I found out there were 12 peaks, all scrambles or above, and instantly I knew I wanted to do all 12 in a day, which had never been done. However, this was 2010, and I had no idea how to trad climb, and two of the peaks had fifth class pitches.

Fast forward to 2017, and I’ve spent the better part of a decade learning the two skills needed for this mission, alpine climbing and endurance running! Even better, Gavin Woody, was down for the mission one he saw how beautiful of a line it was. Together, Gavin and I, decided to run the Tatoosh Traverse as part of The Mountaineer’s “Our Parks, Your Adventure” fundraiser. Their mission is to provide outdoor experiences to youth, something that definitely changed my life once I was exposed to it. 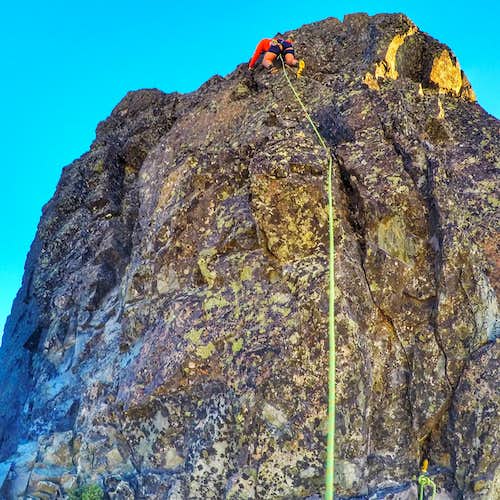 Climbing the south face of Unicorn
We estimated it would take perhaps 14-16 hours for the traverse, and another 2-3 for the run on the Wonderland back to our cars. We traveled east to west in order to knock out Stevens first, the one most climbers tend to skip, so that we wouldn’t have that option. Leaving the Snow Lake trailhead at 4am, we were fully amped up as we made our way to up. We made a game day decision to go up and over the Unicorn saddle to get to Stevens, rather than the lower traverse through Maple Creek basin like we had scouted. This enabled us to leave our rope and harness at the saddle and have less weight for Stevens and Boundary. Making good time, we got to the saddle much earlier than expected, and decided to climb Unicorn first to let the sun come up and hit the snow slopes to soften them for the descent to the Stevens saddle. I led Unicorn, a 5.6, with no problems and we had the first one done!

We dropped down the east side of the Unicorn saddle towards the Stevens/Boundary saddle, and made our way up the ridge towards Stevens. We stayed on the south side for the start, then came up to a notch at 6040′ to drop onto the north side momentarily to get around a steeper section. You can easily skirt around the cliffs and gain the ridge again, staying on the ridge proper all the way to the summit.

Coming back to the saddle, we decided to attack Boundary Peak by it’s south ridge. We climbed up a snowfield far to the left, made our way through some dense trees around some gendarmes on the west side, and climbed up a fourth class gully to achieve the full south ridge, taking it all the way to the summit. A short backtrack on the ridge took us around to follow the Unicorn/Boundary ridge back to the saddle where we had stashed our climbing gear, where we repacked and came down to the Unicorn/West Unicorn Saddle, and descended to the Foss ridgeline. Foss went pretty easily staying on the ridge the entire time, no harder than class 2.

Descending the west face of Foss, we headed towards the saddle of Castle/Foss, and hiked the ridge proper to Castle. Roping up once again, Gavin had the lead this time as he nailed a sweet dihedral and brought me up. I would put the line we took as 5.4. There are said to be fourth class routes to the top of the Castle pinnacle, and then an exposed scramble to the true summit, but even if we could have soloed it, I wouldn’t have felt comfortable down climbing it, so a rope is neccessary for rappelling. 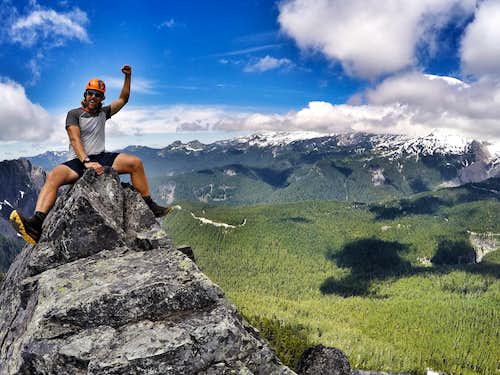 Ride 'em Cowboy! Summit of Lane
There is a little sneak around to get into the bowl between Castle/Pinnacle through some trees to avoid the fourth class loose ridge, and the bowl itself is a loose scree mess. Pinnacle Peak itself is fun, a nice class 3/4 long scramble. Descending to the Pinnacle/Plummer saddle, a good trail leads to the top of Plummer, hardly class 2. There was intermittent snow between Plummer/Denman, so the easy trail we read about we couldn’t really keep, and we probably made this traverse harder than it should have been, and same over to Lane too. Denman itself is a low peak, class 2 once more. And on to Lane….

Lane was the one peak I had never done before, but reading online said it was class 3 and straightforward, going up the SE face. Well, we went up the SE face, but it seemed our line we took was definitely class 4 and loose. There was a gully to the right of the face we went up that seemed to be solid rock, but more exposed. From our best hindsight guess, the gully was probably the route we should have taken. Gavin and I topped out on Lane, and broke out harnesses for the descent, rappelling off a sketchy hollow dead tree through the worst of the steep loose choss! 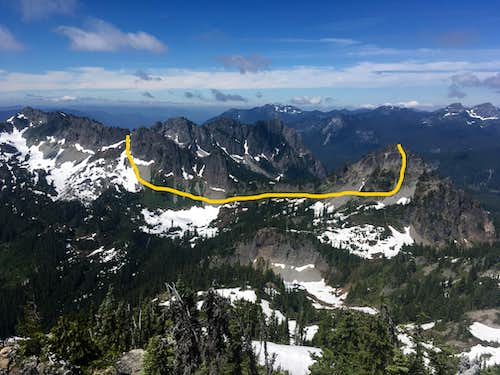 Lane towards Wahpenayo Ridge
geThere is no defined path between Lane and Wahpenayo, so this next part was tough. We dropped way down from Lane on the south side of the ridge to about 5300′ and traversed over, aiming for a low point in the ridge just past the two high points on the Wahpenayo side. You would be able to eyeball this particular low point by the large bus sized boulders sitting directly downhill from it. From the notch, it’s easiest to stay on the north side of the ridge to just below Wahpenayo summit if there’s good snow coverage. If there’s not much snow, the transition back onto the ridge can be quite tough, and it’s easier to stay on the ridge proper, with a little bit of bushwack, which was our route. 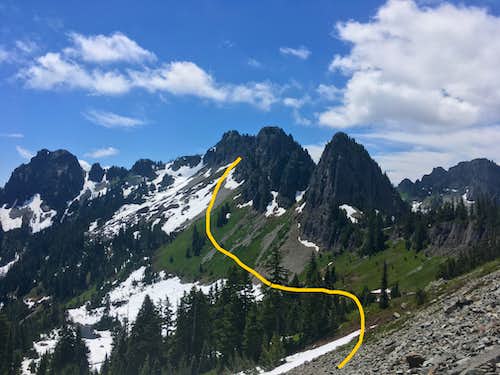 Contour around bowl on the south side towards gully
A trail reappeared again leading to a notch between Wahpenayo and Chutla, staying on the north side. After the notch, we dropped onto the west side and traverse more scree where the trail pittered out. We aim upwards again and hit the Chutla/Eagle ridge by a steep vegetated bushwack. Once on the ridge, Chutla went pretty easily with a good identifiable trail again and class 3 scrambling. Retracing our steps back to the main saddle, and one last class 3 scramble up Eagle Peak got us to the top of the 12th and final Tatoosh peak!

Three beautiful miles of actual maintained trail (a real treat for the day!) later, we were down to Longmire for a total traverse time of 13H:34M, first time the traverse had been done in a day, and a new record. We still had 8 miles of trail running to do to get us back to the car, so we couldn’t celebrate yet. Gavin and me reminisced about each of our previous Wonderland experiences as we ran our way back, drawing some odd stares from the tourists. Two hours later, we were back at Snow Lake TH with Rainier Beers in hand for a total time of 15H:35M! Definitely a good day in the hills, and a bucket list climb knocked off.

Gavin and I had scouted out the two technical pitches two weeks earlier in order to be as efficient as possible with our protection. We ended up taking three cams, a BD .3, .75 and 2, and four nuts, plus slings, and a 35 meter rope. Unless you know exactly where to put them, more protection would be nice. Since the pitches were pretty easy, we used the Black Diamond Couloir harness. We ran in La Sportiva shoes, Gavin the Akyra, and me the Crossover GTX. Having a technical running shoe allowed us to lead fifth class pitches without having to bring rock shoes, a nice weight savings. We had ice axes for the snow traverses; Gavin also brought microspikes but didn’t use them much. We both used an Ultimate Direction Fastpack.

Sounds like a fun trip! Excellent work stringing all those together