Why you're going to do it.

Almost no one recommends technical climbing on volcanic crud, but this is an exception.
The Tatoosh Traverse is a way to enjoy fine scenery, and bag a few peaks, while laughing at the hundreds of tiny dots laboring up to Camp Muir for their summit bid on Rainier. It makes a great spring ski-traverse if you have good AT or tele boots you can climb in. It's an uncrowded climbing experience with better views of nature without any guided rope teams puking along the snow slog. There's even a taste of alpine rock climbing. The summits are Stevens, Unicorn, Foss, Castle, Pinnacle, Plummer, Denman, Lane, Wahpenayo, Chutla, and Eagle Peak. While many include Border Peak, I personally have not done it, so have not included it here. 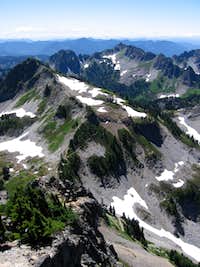 The route is accessible from three trailheads. Snow Lakes from the East, Eagle Peak from the West, and right smack in the middle is the ever popular Pinnacle Peak trail. Start at either end, Stevens Peak or Eagle Peak. This description starts at Stevens peak. From the Snow Lakes trailhead, begin by climbing up to Unicorn peak, which is low fifth class. From there, it's a long traverse over to and back from Stevens peak, with the occasional 3rd class move. Other trip reports indicate that Border Peak can also be bagged on the way to Stevens. While it's a long traverse, with some loose rock, it's easier to traverse this ridge than to wrestle with the slide alder from the road.

After returning to Unicorn, a subsummit, unofficially called Mt. Gesswick, can quickly be bagged, then it's on to Foss peak, which is a simple high point on the ridge to Castle peak. Castle peak is easiest climbed via chimneys on the south side, another low fifth class scramble, with "good"

basalt pillers to rap off of. If you're feeling spunky, continue up the East Ridge of Pinnacle Peak, or circle around the south side and ascend the standard route from the Plummer-Pinnacle saddle.

Plummer is easy to bag, and Denman hardly even seems a peak when climbed up the "backside", though it's a good place to photo Pinnacle and the omnipresent Rainier. There is also a great place to camp just below the summit. Continue down a steep little twisting user path to the gap between Denman and Lane. From the low spot (more good camping) hike up a use path looking for an even fainter path that veers up the southwest face gully to the summit of Lane. From my personal experience, I must say that getting off route here does not add to the difficulty, but the rock is certainly looser than Pinnacle. 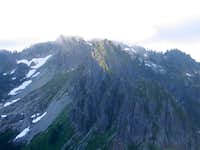 After Lane Peak, virtually all use trails (except those made by mountain goats) disappear, and you are on your own. Traversing from Lane to Wahpenayo can be a chore, but follow this description, and you'll arrive at Wahpenayo in fine form. After descending from Lane, skirt below the scree line in light brush. 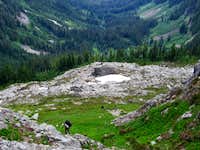 Aim for the largest boulders in a talus field on the other side of the bowl. Ignore possible "passes" before this the largest scree slope as they cliff out on the other side. Ascend the talus cone into a broad chute, that almost becomes a coulior before reaching the ridge. This traverse and ascent is easier if there is still snow present. Once reaching the ridge crest, do not stay on it, even though there is a fat path winding through the rocks and trees. It's fat because so many people have had to backtrack down it. Instead, contour along a huge ledge that's about as wide as a two lane highway to a large bowl. Continue to contour around the bowl to the Wahpenayo ridge. After attaining the ridge, it's a fun quick scramble to the summit.

After descending Wahpenayo, a use path reappers, that follows the west flank of the ridge toward Chutla. In the summer this can be some pretty steep grass, and it can be easy to lose the easiest use path, but it's more tedious than dangerous. Plod through a bit of talus, and continue a gradual downward traverse until sighting the Eagle Peak Trail. 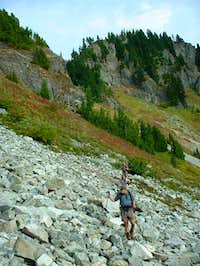 After reaching the trail, quickly ascend to the saddle between Chutla adn Eagle, bag these two, both of which have entertaining scrambles thorugh tree roots and exposed but easy ledges. Descend the Eagle Creek trailhead, and carefully skirt what remains of the road at Longmire, after the 2006 floods. Journey complete.

Click the main page of Pinnacle Peak for a great route description of both halves of the traverse.

Stay light. Take a half dozen shoulder slings, plus a couple double length slings. A fistful of stoppers and 3 cams such as camalots #1,2,3, is plenty, that or hexes. In spring take an Ice-axe.

In Winter or early Spring, most traverses between peaks are skiable. The least likely ski traverses are those going to Wahpenayo from either direction. However, most of the traversing from Unicorn to Denman is feasable.

Take as long as you like, but here are my recommendations.

Day Speed trips: Be comfortable soloing low fifth class junk, and make sure traverses are snow free. Be in shape enough to jog between summits. From Snow Lakes, skip Stevens, as it is too much out of the way. The rest of the peaks to Denman should be doable in one day. A longer day outing would be to start Eagle Peak, and climb all the peaks you can until reaching the Pinnacle Peak trail. This traverse is much more time consuming.

Day Trips, not so Speedy: Judging from the use paths, it seems most people climb Eagle, Chutla, and Wahpenayo, then take a look at Lane, a look at the watch, and another look at Lane, and turn around. The same can be said for the Pinnacle\Castle\Plummer\Denman group. A great cluster of peaks, and no long traverses. Of course, from Snow Lakes, the typical outing is Unicorn and maybe Boundary, MAYBE Stevens or Foss.

Entire traverse: Once overnight gear is involved, of course the pace slows considerably. For a party to do all 12 peaks usually takes 2.5 days. If you only have a weekend, hike in and camp as high as you can Friday Night, and be preapared to summit your last peak or two in the twilight.

All of these are mere mortal estimates. I true speed demon familiar with the route should be able to do it all in 24 hours, but it would hurt.