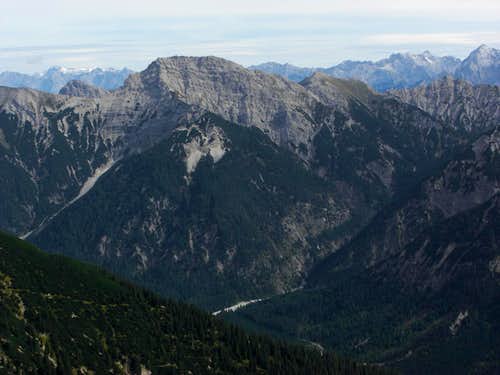 The traverse itself is not very difficult but in some parts a bit exposed and combined with rock scramble and with two parts up to UIAA grade I+/II (short moves). The trail is narrow, unmarked though flagged with some cairns (not too many of them) and in some parts not existing. Bad weather, thunderstorm or dense fog are “no go” for this outing. 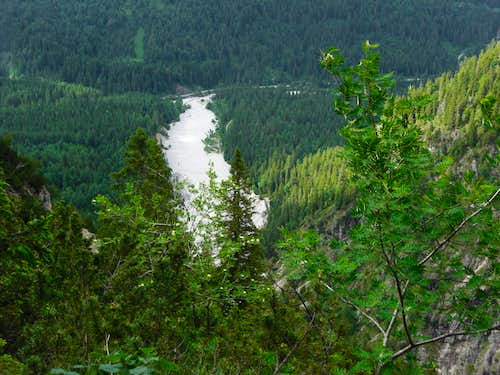 Coming from München or Garmisch-Partenkirchen (highway A95, road number B23) take road number B23 to Ettaland, 500 m after leaving Ettal, St2060 to Graswang and Linderhof. Continue on that road until you cross the Linder creek on a road bridge. Go on for about 3,5 km until you cross a second bridge. After that bridge there is a parking area on the left side of the road; this is the trailhead. You can use a road turnout about 200 m before you reach the above mentioned bridge, too, for parking.

Coming from Reutte take road number L255 to Plansee and Ammerwald Hotel. Some 2 km after Ammerwald there are two switchbacks before you reach the trailhead parking area on the right side of the road. The above mentioned turnout is located after the bridge across Linder creek on the left.

The trailhead is named “Bei den Sieben Quellen” (at the seven springs) in the topo maps.

This part is describes on the Kreuzspitze main page. Enter “Lindergries”, the huge scree fan of Neualpl valley, and cross it to its orographic right side. Follow the forest road and the trail number 241 into the Hochgries drainage where the trail zigzags up to Schwarzenköpfl.

Descend into a notch south of the summit and ascend the south ridge again.

Follow the ridge crest over some exposed slabs until you reach a steep rock sstep above a second notch. There is a fixed iron chain securing this exposed part of the traverse. The rock step is a short overhang of about 3 m which has to be overcome while descending into the second notch. Ascend again to the south ridge until you reach a near level part of the ridge with nice meadows on its southeastern side (great place for a summit break).

The ridge now becomes broader and descends towards the central notch between Ammergauer Kreuzspitze and Kreuzspitzl. Follow the ridge crest or traverse some rock parts on the west side mostly on a narrow and steep trail. Some cairns give the main direction. Above the notch the ridge ends at a steep rock face and the route descends several shallow and short chutes (easy rock scramble) into the notch.

Ascend directly up to the opposite rock face, climb left into a shallow chute over some steep slabs until the route is blocked by a near perpendicular rock face. Follow a ledge to your right (cairn) and climb up a 4 m high rock face at the end of the ledge (short UIAA grade II moves, crux of the route). Alternatively enter a steep and narrow chute right of the above mentioned slabs and ledges which leads to the upper end of the crux rock face.

Turn left and follow some tracks up frail rocks and scree until the tracks turn right and lead into a steep meadow. The trail restarts there and ascends to a meadow overgrown secondary ridge in the west slopes of Kreuzspitzl. Follow this ridge until the trail restarts again to your left. Follow the trail up to Kreuzspitzl main summit.
Allow 1 to 1,5 hours for the traverse

Follow the south ridge of Kreuzspitzl until it ends at a steep rock face. Turn right and descend the steep west ridge of Kreuzspitzl until you reach the beautiful and remote meadows of Neualpl col, the broad col between Kreuzspitzl and Geierköpfe. There is a trail junction with trail number 243 to Geierköpfe. Turn right and descend this trail to Neualpl hunters cabin. The trail now traverses the east end of the Geierköpfe ridge with many ups and downs, including some steep and exposed creek gully traverses where the trail sometimes is destroyed by flashfloods or landslides – so watch your steps.

At last the trail descends into Neualpl valley and enters the broad scree fan, called “Lindergries”. Follow the scree fan until its end to the trailhead (2 – 2,5 hours for the descent). 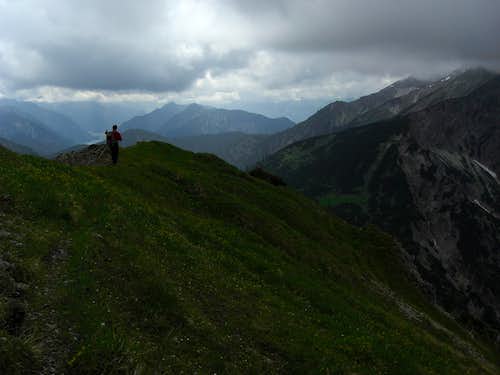 The traverse should be done mainly in summer and autumn. Hiking gear and good shoes are sufficient. You should not suffer from fear of vertigo and master rock scrambling up to some UIAA grade II moves in more or less frail and crumbly rock. 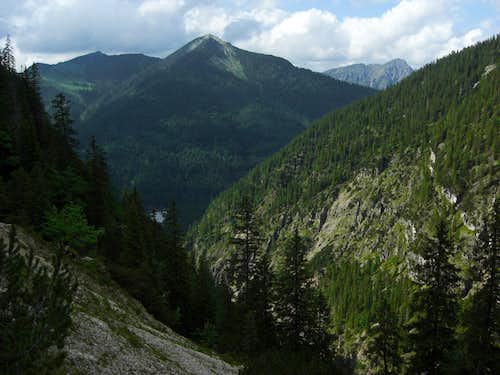