The Arc of Fire 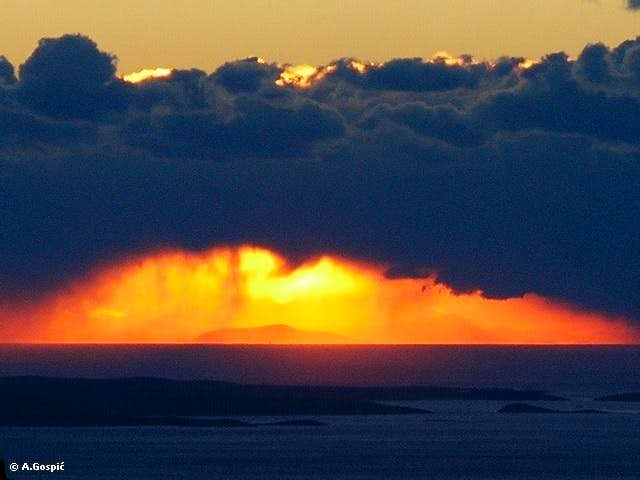 Below the incredible Arc of Fire, that opened like a portal above the Adriatic Sea, Italian coast with Monte Conero (572m, 170km away) near Ancona town burns! Farther at the back and right Appenines (220km away) are visible. Show observed from the Vrtlina cave plateau. Photo: Aleksandar Gospic
« PREV NEXT »

What a shot! Hats off, Sasa, you are a master!

Still, someone dared to downvote this pic :-(((

Thanks Vid very much! Looks like there were at least 4 *** votes which shows that standard on SP has gone so high, no more mercy for anything below brilliant ;-)

See the downvoters have hit this one already!! This is bullsh.t!

Who ever voted 0 Stars is an idiot and has no life. "long time members" should know better.

I didn't vote on it, but perhaps they thought that it was a picture that belongs in a personal photo album, and not something that contributes useful information to the site...

If they thought that this is no inormative photo I have to mention that just seeing Italian coast across the Adriatic Sea (more than 150 km away) from Velebit montain is very interesting and exciting exprience and very rare situation, that should be documented!!!

Matthew, it really doesn't matter to me how many stars photo gets, if not a single one that's fine with me, but I have to comment on the usefulness matter. I had no idea that showing a view from the mountain is not useful?! Isn't that one of biggest reasons why we climb mountains in the first place? I believe 70% of the photos on SP, if not more than that, are views and panoramas. Showing the actual path is not necessary when it is not demanding, that is only necessary in rock climbing.

I agree that the views are one of the reasons to go the mountains, and that it's useful to have an idea of the scenery to expect around a given peak. But IMO, often a couple of shots per page suffices for this. When >70% of pictures (by your estimation) fall in this category, they tend to attract a knee-jerk reaction from those like me. They drown out the more useful pictures, and make the site less usable.

I have no idea how many such pictures are on the Velebit page, I'm just speaking in generalities of what I observe on SP...

The Mt. Whitney page in CA is much like this. There are some stellar sunrise photos on there of the peak. Frankly, I never vote on them. They may be 4-star photos, maybe even professional quality in places... but I've pretty much seen them all before, and they contribute nothing particularly new to the page. And I can certainly understand why someone would downvote such a picture, and not out of malice or spite. I might mention that I'm not alone in this; I know a couple of long-term members who share my opinion.

Thanks Radek very much!

Thanks Vlado! I dedicate clap, clap, clap to Mother Nature, it was unforgetable view! :-)

Sasa for me five stars for this fantastic shot :-)

Thanks very much Ales!