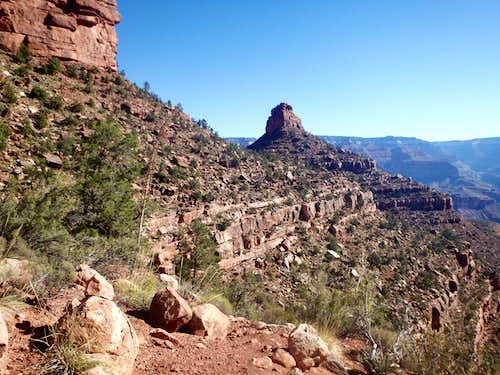 Every day, 100s of visitors look out from the Grand Canyon's South Rim and see dozens of spires, pinnacles, and narrow summits that all seem unclimbable to even themost skilled climbers. It's probably why peakbagging in the Grand Canyon probably hasn't caught on, despite it being one of the most popular parks in the US.
In reality, while a good number of the summits are technical, there's a few dozen that make for exciting scrambles and a way to experience the canyon in a way few have.
Of these scrambles, one of the easiest of the South Rim is The Battleship, named for the broad, narrow plateau with a dramatic summit caprock on one end, looking like the bridge and a long deck. It also has several smaller towers, looking like smokestacks near the bridge. The route follows the Bright Angel Trail for some time before traversing across the red sandstone to an improbable class III route on the NE side.

Enter Grand Canyon National Park's South Rim either via US 180 to the South or US 89 from Cameron. Make your way to the Bright Angel Trailhead just West of the Bright Angel Lodge and Kolb Studio. I usually park at the Backcountry visitors center and walk to the rim from there.

9 miles roundtrip
500' gain on the way in, 1400' on the way out
Crux: Class III
Approach: Don't let the mileage fool you, this will take at least half a day, with the most exhausting part climbing out of the canyon. The approach starts by descending the Bright Angel trail with all the tourists that hike to the first rest house 1.5 miles in just through the Coconino Sandstone. During the summer months, this is pretty nice to help keep water weight low, although it's obviously significantly hotter. After the first rest stop at 1.5 miles, the trail switches and cuts hard to the west for about 0.5 miles to another very sharp switchback. It's the first big switchback after the rest stop and as of the summer of 2015, had a "Don't Feed The Animals" sign. This is where you get off trail. There's two options, one that goes slightly up, the other going slightly down, but either works. The goal here is to traverse along the red sandstone to the saddle between The Battleship and Maricopa Point off the rim. It's virtually the same elevation as where you leave the Bright Angel Trail, so if you're ascending or descending more than 50', you're doing something wrong. Once you hit the saddle, you'll pretty much be at the base of The Battleship, with its' Southern "smokestacks" directly above. Traverse around the east side of the Battleship until you're at the NE corner of the formation. If you're looking straight down the North Ridge to the plateau below you've gone too far. Unfortunately, it's a bit easier to find once you're past it, but you're looking for a 10-15' ramp up to a large boulder with a cairn on top that you can't really see until you're on it. 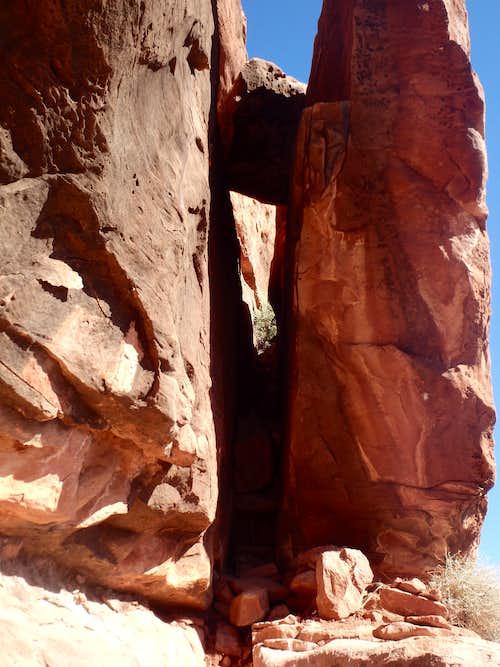 Climb: Once you've found the ramp, the route become fairly self explanatory, as there aren't really many branch points that could lead you astray. From atop the boulder, ascend some easy ledges and look for a huge, narrow ramp formed by the summit rock and a large rock flake next to it. Follow it up multiple levels until it dead ends at a class III headwall. The lower part is hardest and requires some chimney stemming to get to some better holds. This probably isn't a great place to take someone who hasn't been on class III before, but anyone comfortable with class III should do fine. The headwall is maybe 20'. This is followed by another awkward class III move to the left, followed by an easy traverse under a cool sandstone overhang. Past the overhang, the route meanders up more ledges, staying pretty much class II the rest of the way to the summit aside for one small section of class III which is more or less a miniature version of the crux with a leaning rock and a chockstone to go underneath.
The summit is actually really interesting, with a summit cairn built in the likeness of a Battleship! Be sure to head to the north end of the summit plateau to see the dramatic Northern smokestack with a good 300' gap between it and the summit. On the south end are some of signatures carved into the rock from 1919, the year the park was founded (obviously, don't add you're own name). 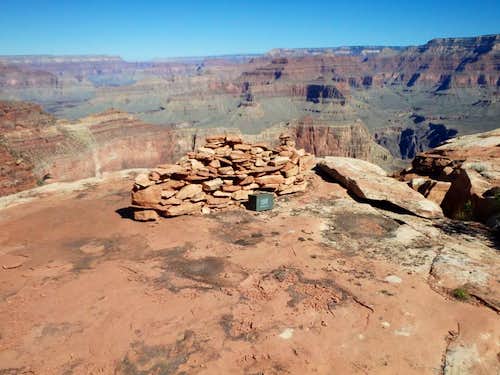 As with most hiking in Arizona, Fall and Spring are the best. Summer can be brutally hot, although the water will be turned on at the 1.5 mile rest station to keep your load lighter. Winter can bring ice on the upper portion of the Bright Angel Trail which stays in the shade all winter, and microspikes are a good idea.

There are two developed campgrounds on the South Rim: Mather (which takes reservations) and Desert View. The closest backcountry campsite would be Indian Gardens over 2,000' below, but you could always add on the Battleship to a backpack if you left you're packs at the junction (assuming no critters got in while you were away).
There is plenty of places for camping at large in the National Forest just outside the park.