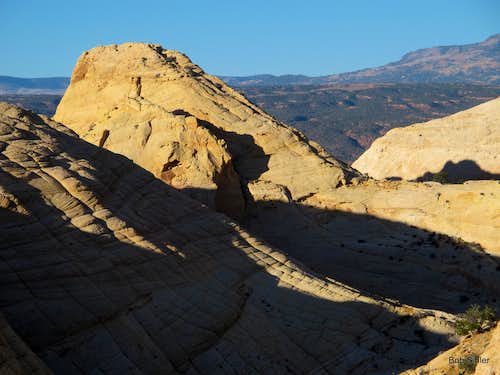 Sandstone Butte
On a chilly March afternoon in March 2006, with my 6-month-old son in a backpack (because his name is Jack, we came to call that backpack the "Jackpack," even in later years when we used it to tote our other children about), I set out with my wife on a popular trail in Capitol Reef National Park. Near our turnaround point, I noticed a gully not too far from the trail, and the gully seemed to promise some Class 3 or 4 scrambling access to some unnamed peaks above.  Without having sufficient time left that day to check out the gully, and knowing that my wife wouldn't have appreciated my going off alone and wouldn't want to join me (meaning dragging Jack into something she'd consider dangerous), I made a mental note to return someday and explore that route and whatever lay above it.
That someday finally occurred more than 6 years later, in October 2012.
Starting at dawn after a night spent in the car at a pullout near the trailhead, I headed off into the cool desert morning, which soon turned warm under the sun and an unbroken blue sky. Before long, I was leaving the trail and crossing little-touched ground to reach that gully I'd seen all those years ago.  A thrill like that of a child anticipating the last day of school seized me, for I was embarking upon my favorite thing: wandering the unknown by myself, seeing what there was to see and dealing with whatever it served me.
As I roamed the ridges, drank in the views, discovered interesting rock formations that probably few others, if any, have ever seen, and returned to the trail via a scenic, obscure canyon that turned out to be a pocket of wonder, I remembered, yet again, that in spite of all the named objectives out there, in spite of all the challenges faced and those yet to come, and in spite of all the satisfaction that can come from saying, "Yeah, I've climbed that," the best things in life, or the life of a climber and a mountaineer, are the unknown, the unheralded, the untrodden.
William Wordsworth started a poem with "She dwelt among the untrodden ways." It brings to mind a vision of a rare, quiet beauty among unsung splendor.  For me, "She" is the Muse that sings to me when I am alone in the places no one else sees.
And there I found my Muse, once more, that morning. 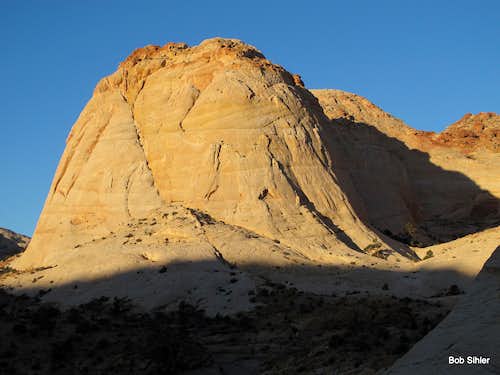 Dawn on an Unnamed Dome
What was the trail?  Where was the gully?  Which peak was it?
Not telling.  That would ruin the magic, and it would ruin the purpose, for the purpose of this story is not to call others to this particular peak but to remind and inspire others about their own secret places and the indeterminate value such places hold.  From some of the pictures, you might, if you know Capitol Reef reasonably well, figure out which trail I was on and what general area the peak I climbed is in, but I won't be making it any easier for anyone else to do so.  Again, that would ruin the purpose.
Now join me for a walk through a dream... 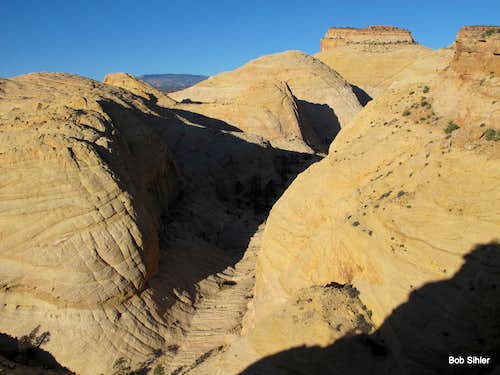 Golden Throne and Canyon with Pool-- my return route would take me through that canyon after I found a way to drop into it near its head. 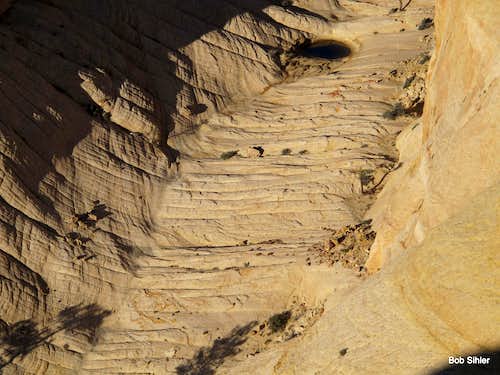 Pool seen from above-- after I spotted it, I knew I had to find a way down to it, and I did.
As I sought and found a way down into the canyon where the pool was, I came across a small arch that maybe a handful of other people at best have ever seen.
Finally, I was down at the bottom of the canyon. 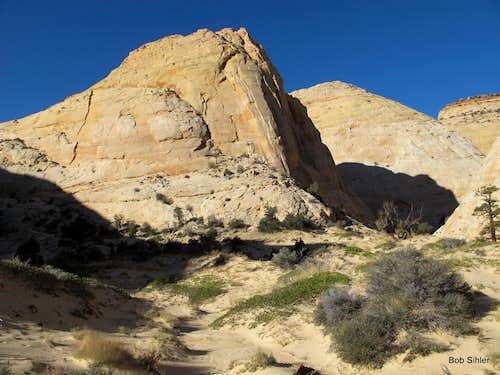 In the Hidden Canyon 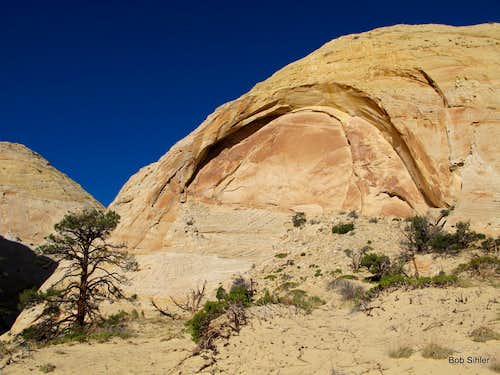 Arch on Slabs
At last, I reached the pool. There was still more to go and more to see, including some waterfall obstacles to negotiate before getting on easy ground leading me back to the trail, but this was the real treat of the day. 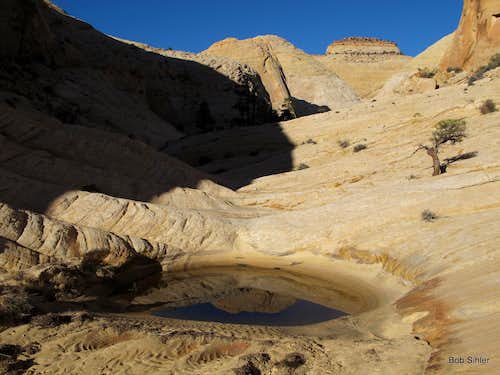 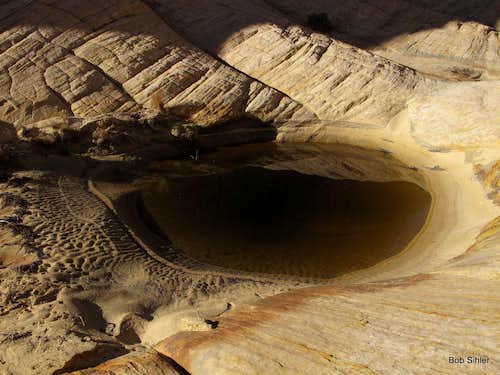 Pool in Remote Canyon
To each his own, yes. We all climb for different reasons and get different things out of it. Each year here on SummitPost, there are the predictable threads about the predictable peaks and the predictable routes. Many of them are very worthy climbs, among the finest there are. But when I consider mornings like my October 2012 one and the lack of deep satisfaction I get from going the same ways and seeing the same things that so many others do, I appreciate my obscure little patches of paradise all the more.

Re: welcome to the club Bob

Yes, it looks as though we were in the same vicinity; that Golden Throne shot seems to be a bit northwest from where I took mine, but quite similar. I love to just go off exploring the slickrock and canyons of southern Utah.