The Black Giant & Mount Solomons over Wanda Lake at sunset 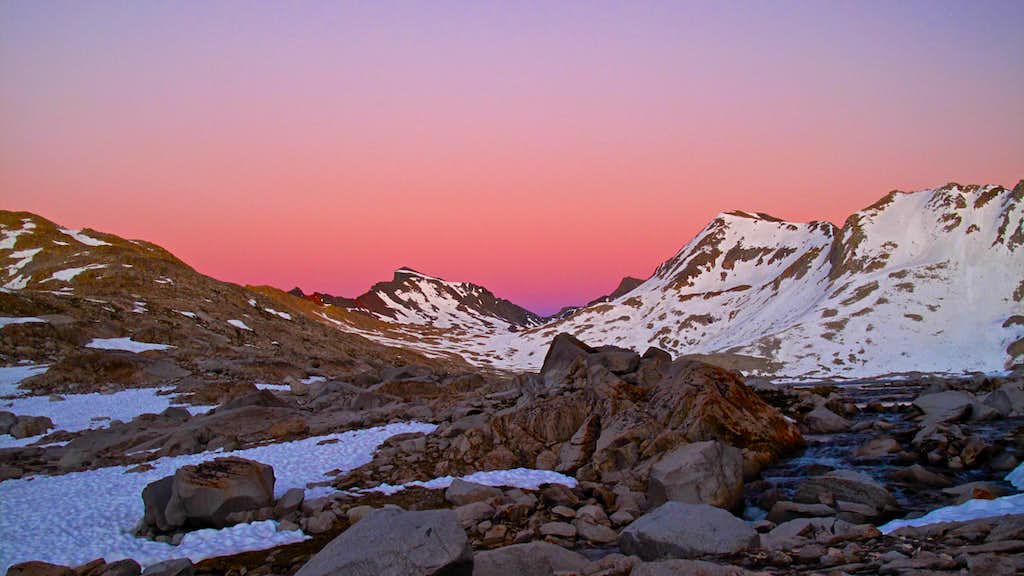 The latitude and longitude are for where the photo was taken, July 6, 2009 (2009.07.06). The notch in the center is Black Giant Pass, which leads to the eastern end of the Ionian Basin. We were hoping to exit via that pass, but we ran out of time, in part due to snow blindness, so we exited via the much steeper and snowier Solomons Pass, which is the small notch about 1/4 of the way in from the right side of the photo. It was steep and snowy, and, ultimately, quite fun. I like the hint of purple just above Black Giant Pass. If I'm not mistaken, it's an Earth shadow: http://www.webexhibits.org/causesofcolor/14E.html
« PREV NEXT »

Gotta love the way the purple breathes life
into the picture. Looks cold for July!

Thanks, I'm glad you like the photo. It was a great campsite.

As for July temperatures, cold was certainly correct. It was probably 95 °F that day only 25 miles away in Bishop, CA, but all that little now melt streams froze around us during the night.

According to our guidebook, we were about a month too early to experience the optimal weather conditions, but that didn't stop the flow of JMT thru-hikers, either. A few of the ultralight folk in shorts were rather cold, though!

Where were the "thru-hikers" on the JMT headed?
Were they coming back from the basin? Where
do they spend the night - is there a campground at the trailhead ???

I had water freeze on me here in AZ, but
that was only during the winter.

We didn't talk with members from all the parties, but most of the north to south hikers had started in Yosemite Valley, which was about 120 miles from where we met up with them. We didn't ask any of the south to north folks where they had come from.

Out in the evolution region, it's more than 20 trail miles back to a trailhead, and dispersal camping is the rule.

One group that we passed was carrying kayaks loaded with gear for a run down the Middle Fork of the Kings. Intense!

Thanks again for the comments!