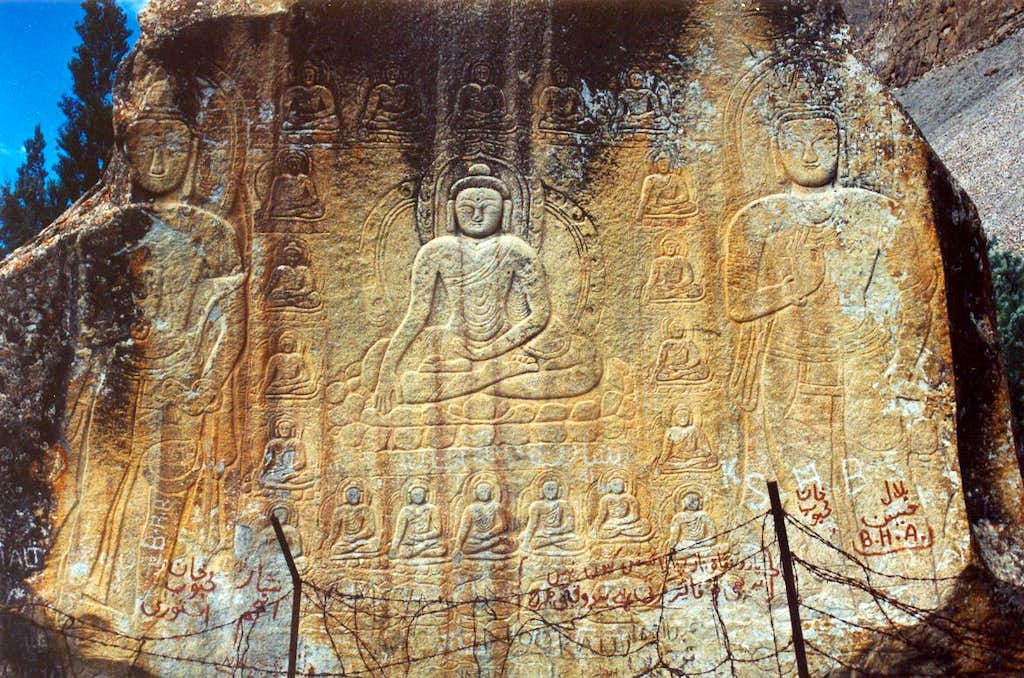 Buddhist Rock is located on Sadpara road near Sadpara Lake,A meditating Buddha carved on a large rock about half way between Skardu and Sadpara. The Buddha, carved on a big rust brown rock,in the 7th century.
« PREV NEXT »

A very long time ago,

Re: A very long time ago,

Thank you for your nice comments.

Many thanks for a valuable photo!!

The Buddhism spread over the western Sichan of China as one of the sect of the Ramaism in the 7th century, too. But there are very few trace of that time.

Re: Many thanks for a valuable photo!!

Dear Mr.Kenzo Okawa
Thank you very much for your kind comments,
Baltistan, is separated by a 100 km thick wall of majestic mountains from China in the north. To the south is the mysterious Deosai Plateau (Deosai National Park) lying between Kashmir and Baltistan. In the East lies Laddakh and in the west is Gilgit and Hunza. Within an area of 28,000 sq. km lie 60 mountain peaks of above 7000m.
Tibetan Khampa and Dardic tribes came to Baltistan prior to civilization, and these groups eventually settled down, creating the Balti people. It was believed that the Balti people came under the Sphere of influence from the kingdom of Zhang Zhung.
Baltistan came under the control of the Tibetan king Songtsen Gampo in the 7th century. Under Tibetan cultural influence, the Bön and Animist Baltis began to adopt Tibetan Buddhism from Indian Buddhism. Religious artifacts such as the Gompas and Chörtens were erected, and Lamas played an important role in the lives of the Baltis. Ruins of Buddhism are found at Niali Shigar, Skardu and valleys of Kharmang, Khapulo and Rondu. With the decline of power of Central Tibet during the 11th century, Baltistan came under the control of the Shigari, Rmakpon and Namgyal royal families, and fostered a close relationship with Ladakh in the east. Similar linguistic and cultural characteristics of Baltiyul and Ladakh helped in forging an administrative unit that existed until 1948.
Tibetan infuence can be seen in its architecture, where houses with flat roof painted white and sloping inwards are built, and the most notable artifacts of the Balti/Ladakhi architecture include Kharpocho in Skardu, Khapulo Khar in Khapulo, Chakchan and Shigar Khanqah and Baltit fort of Hunza.
Baltistan is proud of her thousands of years of rich civilization. Her architecture, costumes, cuisines, festivals, dances, language, script and epics make her unique among her neighbors, especially within the contemporary Northern Areas of Pakistan.

Re: a question Karrar.

You are right that the local authorities put the barbed wire for the protection of Rock.
Thanks for your visit and vote.