The central part of the... 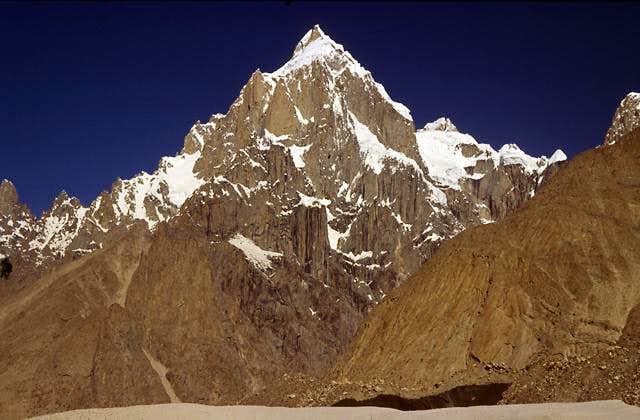 The central part of the group, seen from a vantage point on Baltoro glacier.
« PREV NEXT »

The mountain is Paiyu (meaning salt in local Balti language)which is situated short of snouts of Baltoro glacier. It is not part of Trango Towers as indicated in the report. It was first attempted in 1974 by an American Pak Expedition led by Mr Nicholas B Clinch of American Alpine Club and included Tom Hornbien (Everest summiteer) besides Dick Emerson and others. Alpine Club of Pakistan members included Saeed, Jawaid and Momin. During a descent from Camp II, Momin slipped and rolled down over 1200 ft and was killed which forced the Expedition to abandon.

In 1975 a French team was forced to abandon climb due to another accident.

In 1976 Alpine Club of Pakistan with the support of American Alpine Club launched an all out Pakistani expedition to the mountain under my leadership which was able to reach its summit after two days hard climb from last camp on 21 July 1976. Summiteers included Nazir Sabir, Bashir and myself. Mr Allen Steck from AAC, our coach opted not to go to the summit. Other members of the expedition were Jawaid, Saeed, Ayaz, Yousufzai, Amjad and our coach Allen Steck from AAC.

This year we celebrate 30 years of its first ascent. The climbing report appeared in American Alpine Journal of 1976.

The climb was made along the left skyline of the mountain. We establsihed four camps on the mountain. Our Camp II (18,000 ft) was on the left edge on top of the second ice ledge (from left) and our route followed along the couloir above this ice ledge. Our camp IV (20,500 ft) was behind the rock pinnacle below the summit pillars on the left.

For the summit attempt we left our last camp at about 0030 AM on 20 July with the hope to reach the summit and return back same evening. We had to cross wide bergshrund and made over 20 pitches (both vertical and lateral) on very hard ice and rocky patches (in between) before reaching below the snow field which joins the lower peak (visible as the main peak in the photo) and the main icy peak (shrouded by the visible peak) late after sunset on 20 July. As we had expected to return back same day we had not carried sleeping bags, tents and much of food. We had to dig snow cave at this location to spend the night. Next morning it took the tired exhausted Nazir Sabir and myself many hours to do the last climb to the main icy summit, rising about 300 ft above the snow field. At last we reached the summit at 2 PM on 21 July. Bashir joined us later. We returned back to Camp IV after very difficut and torture some rapelling at about 1030 PM on 21 July.

Thanks for the info Manzoor.
I have added it on the main page.