The Cone is a large rounded peak located in the heart of the Boulder Mountains of central Idaho. 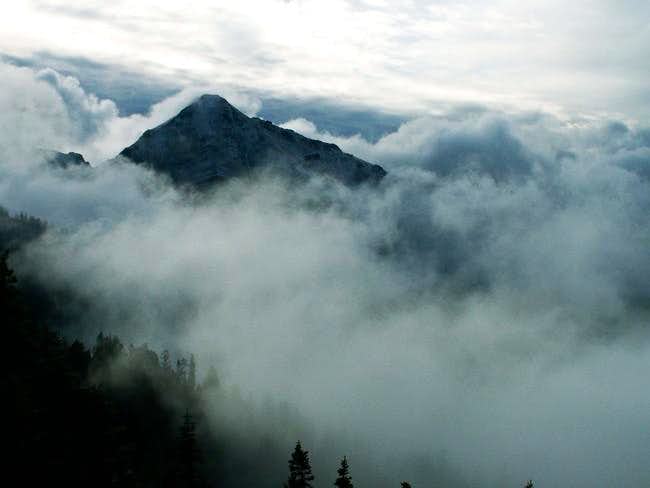 This peak is named for its almost symmetric cone-shaped appearence on TOPO maps as well the shape it takes on when viewed from Ketchum. Its slightly lower elevation, its location which is just south of the main crest, and its setting amongst the most impressive Boulder peaks, make the views from this mountain difficult to beat.

Although it may appear as a giant cone from Ketchum, the north face of this peak is quite picturesque as it towers of the West Pass Valley.

On the summit, as of July 16th 2005, is a summit register that I brought up. If my intuition is correct, I feel I could return in a year or two and not see one new name in that notebook.

Because of its proximity to the two highest peaks in the Boulders, Kent and Ryan, The Cone is almost always overlooked. And it may seem to be an easy scramble to head directly up its southern slopes, it is not. Most of the mountain, like the majority of the range, is composed of rotten rock, allowing only one, easy class three route to the summit.

To access The Cone from Ketchum, Idaho, drive north on highway 75 for 7 miles until coming to the Sawtooth National Recreation Area Headquarters. Turn right on this road follow it 5 miles to its end at a large parking area. A 4-wheel drive is not required.